Post-Apocalyptic movies can spine-tingling or thought-provoking, like Mad Max or Dawn of the Planet of the Apes. They can offer memorable characters and riveting plots that make you ponder the future of mankind. Apocalypse Road has an interesting premise. It focuses on two sisters who become separated and their struggle to survive. Unfortunately, that premise is about all this movie has. It fails to give us intriguing characters or really much of a plot.

The story begins in the sisters’ future with one of the two talking about what they survived. It switches to the past, as the two dressed in dark clothing as they enter a house. They are silent initially but we soon learn that the pair plan to travel to the coast. The oldest sister, Natalie (Katie Kohler) has found a map. The youngest, Sarah (Ashlyn McEvers) doesn’t seem as enthusiastic but Natalie points out they will be warmer.

The two girls head out but soon find themselves separated as Natalie is shot in the leg. She sends Sarah to safety but Sarah ends up caught up with a group of men who want her to join them, fighting others on the road, led by Damon (Billy Blair). Meanwhile, Natalie’s wound is treated and she is joined by a man, Derek (Ben Rigsby Jr.), who thinks they can help each other. The movie tells the story of the sisters’ trek to find each other and make it to the coast alive.

One of the few elements I did like was the voiceover at the beginning, which is used again at the end, to highlight the action. While it isn’t a lot of information, it does help explain one theme in the movie, the marks some people wear and how those people are hunted. There is some development around the idea and exploration of whether it is better to be dead than be used by whoever created the marks. If there had been more explanation, this might have been a really cool concept. 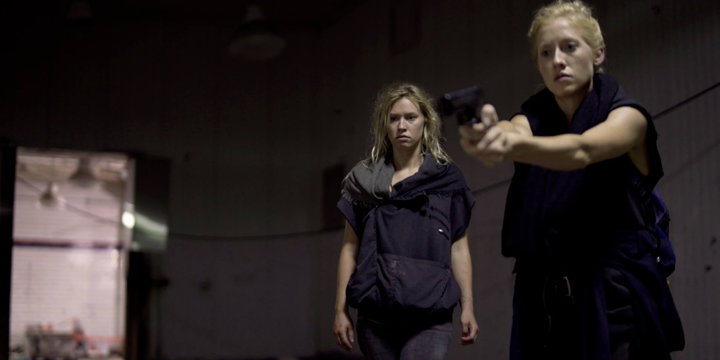 The story just fails to do enough world building. The movie never explains what happened to the rest of society or just why the pair are on the run. It introduces a mysterious gunman who has no name (Lance De Los Santos) but doesn’t explain why he is hunting the sisters. Why the mark is on people or what really happens to those who have the mark is not clear. The separation of the two sisters seems more of a contrivance to have them struggle while we never learn even where they are located or which coast they are headed toward.

The story doesn’t have a lot of body to it either. The basic premise is the sisters are seeking to reach the coast because they’ve heard a rumor of boats rescuing people. Beyond both girls trying to get to that location, there is very little that happens. They meet people along the way but all of them eventually are gone. We are told via flashbacks some of the events of their lives but those events do not impact the here and now of what they are both experiencing, leaving it as extraneous and unimportant information. None of it helps the viewer care about the two protagonists.

Not only is the plot missing but so too is any real film work. There are shots that don’t matter to the story being told and some of the camera shots telegraph all the action, leaving zero surprises. The ending of the movie never stood a chance, the whole plot given away by the very beginning, when you see only one sister. And which sister is the only surprise. The only part that works is that connection between the beginning and the end of the film, with the older woman bringing the story to a close.

The sisters Natalie and Sarah West are the only characters that have any depth to them. While the writers do make an attempt to build backstory, neither character grows or develops. They’re both written as one note and acted that way as well. Unfortunately, the rest of the characters have zero background and are nothing more than obstacles to the two sister’s eventual reunion.

This film really seems to be trying to be a cross between “Mad Max and “The Walking Dead” but not succeeding at either. While there are hints of people who are marked and Marshals hunting people, we’re never really told fully what’s going on which leaves the story disjointed and the only atmosphere conveyed is one of hopelessness where death seems better than living. This can be a theme in post-apocalyptic films but sadly, all I was only bored.

If you want to see post-apocalyptic, I suggest you skip this. Unless you like a voiceover style ilm or just are into female protagonist films, you won’t really get much from it. The plot is thin and it is not clear just what the writers want to convey. Save your money and time, go see Mad Max: Fury Road which has awesome female characters and a ton more action.

Following a post-apocalyptic event, two sisters are hunted down and separated by a gang of ruthless killers intent on creating their own twisted form of law and order. The sisters must fight through this new, dangerous world to stay alive in the hopes of being reunited, and escaping to freedom.

Apocalypse Road has an interesting premise. It focuses on two sisters who become separated and their struggle to survive. Unfortunately, that premise is about all this movie has. It fails to give us intriguing characters or really much of a plot.