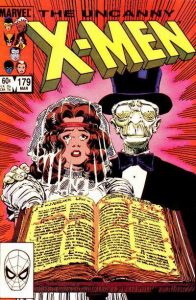 There was a time when I could never get enough of Marvel’s mutants. I started reading X-Men comics back in the mid-80s; I remember being struck by the cover image of Kitty Pryde in a wedding dress, crying, as she stands next to Caliban (X-Men #179). The story of the Morlocks and their being even bigger outcasts than the mutant heroes pulled me in, so much that I went as far back as I could to buy whatever issues I had missed before that, so I could find out more about these characters. I ended up starting with X-Men #138, and picking up the graphic novel compilation of The Dark Phoenix saga to kick things off.

It was the start of a long love affair with Marvel, especially the X-Men and related teams, like The New Mutants, Alpha Flight, X-Factor, and so many miniseries and solo limited series with Wolverine, Magick, and others. That love affair didn’t end, but the comics addiction did, once the monthly take of mutant comics spiked above 10 titles, and my budget couldn’t take the mutant expansion any longer.

So while I eventually stopped collecting the comics, those Marvel Mutants never lost their spot in my heart, but keeping up with the different timelines and spinoffs became tricky, and I managed as best I could. I paid attention to the cartoons now and again, and when the first movies from FOX came out, I was hopeful.

I thought the first X-Men movie was a decent introduction, that Hugh Jackman was going to bring the Wolverine attitude I hoped would be there, but was a little annoyed that someone as young as James Marsden was playing Cyclops. I thought X-Men 2 was magical, from showing Nightcrawler’s fighting style correctly, to teasing the Phoenix Effect coming up from the bottom of the lake… I was giddy and had high hopes for more. We’re not going to talk about X-Men: The Last Stand. Just don’t. X-Men: First Class was a positive step in the right direction, but we’re also not going to talk about X-Men: Apocalypse either. Didn’t happen.

Anyway, fast forward to the current television incarnations, starting with Legion and moving on to The Gifted. It’s been a given that Marvel kinda wants to end the X-Men, since they’ll never get the rights to those characters back from Fox and they’ll never get all the money from those stories that they’d like to, which is why maybe ABC/Disney has pushed the Inhumans so hard (maybe too hard, too fast? That’s for another review).

Despite my misgivings about the more recent X-Men movies, Logan, Legion, and now The Gifted have rekindled my hope that the story-telling still left to enjoy in that world hasn’t been abandoned, even though it’s a timeline I’m not familiar with beyond what was described in Logan. If there’s a graphic novel, existing or upcoming that explains and explores this a bit deeper, let me know, I’ll be all over it!

The Gifted (Mondays on FOX) seems to fall on the early end of the timeline Logan falls on long after the fall of the mutants and the rise of Sentinel Services. We hear mention of the X-Men, and the Brotherhood, but we do not know what happened between them or to them. I’m curious if this is going to be timeline following what happened in X-Men: Days of Future Past, but the fact that so much has happened, and introduced to us without slowing things down for expositions and explanations, is a good thing. It has me mentally running 12 different speculations trying to figure things out… I am in love with this world and it’s characters and I want more. I could kiss all the writers, seriously. Well, maybe big fangirl bear hugs will do.

So many familiar names from the comics are showing up here in different roles, and we’re seeing them interact and evolve in different ways but dealing with all the same issues of being different in a world that hates their existence for that reason alone. It’s a story that resonates with any geek who’s felt like the persistent outsider, and sadly, it’s resonating with a scarier real-world echo these days as well.

We’ve had a lot of hints so far about what the July 15th incident entailed, how what started as a peaceful civil rights march turned into an attack of unknown origin, but as yet we have no specific details about what exactly happened that day. The one thing we do know is hundreds died in the initial attack, and thousands more have died because of the subsequent legislation against and crackdown on mutants. That event somehow also directly led to the X-Men and the Brotherhood disappearing from public view (or were utterly destroyed by Sentinel Services).

I also appreciate the inside joke… July 15, 1991 was the date of Marvel Entertainment’s initial public offering on the NYSE. I’m curious to know a little bit more about the show using that date as a keystone for this particular Marvel mutant universe event.

Matt Nix being the series creator and showrunner was a strong selling point for me, and in just a few episodes his touch shows. So far, I’m seeing the same multilayered story & character development that we had in Burn Notice, another show that I was addicted to for the most of its run. This is a good thing, because without story and building characters we give a damn about, there’s nothing to hang all the mutant-powered action on.

Our main focus at the start is the Strucker family, how father Reed (Stephen Moyer) had been a federal prosecutor in charge of sending mutants away, either to detention or to secret facilities where fates worse than incarceration await (either experimentation or weaponization as Hounds). All of that changes when kids Lauren (Natalie Alyn Lind) and Andy (Percy Hynes White) nearly destroy their high school using mutant abilities, with the family barely escaping Sentinel Services and going on the run. Mom Caitlin (Amy Acker) is afraid of how their life is changed, but also totally fierce when it comes to fighting for her kids and her husband.

Seeing that family dynamic amidst the revelation of the kids’ mutant abilities, combined with the family dynamics of the Mutant Underground members — Marcos as Eclipse (Sean Teale), Lorna Dane as Polaris (Emma Dumout), John Proudstar as Thunderbird (Blair Redford), Sonia as Dreamer (Elena Satine) — and watching the current mutants try to forge a team out of scared refugees is going to be fun to watch.

On the Sentinel Services side, Agent Jace Turner (Coby Bell) has a lot of rage towards all mutants because of his daughter’s death on July 15th, and based on what happens to him at the hands of a vengeful Polaris, we’re going to start getting to the meat of what’s been happening, with the disappearance of the the X-Men and the Brotherhood, the creation of the Hounds, maybe even what caused the catastrophe and more. There appears to be a mystery behind why Lauren and Andy are so strong, and we’ve seen a hint from the appearance of Roderick Campbell (Garret Dillahunt) that he’s searching for powerful siblings for a reason.