Blade Runner is a classic movie that most of my generation has seen, especially if you’re a science fiction geek. It is a loose adaptation of Philip K. Dick’s novel “Do Androids Dream of Electric Sheep”, exploring the nature of humanity and the moral implications of genetic engineering. If asked if they could ever make a sequel or re-make this film, I would have answered no. So, when I saw the trailer for this film, a re-imagining set thirty years into the future, I unexpectedly found myself curious, just on the strength of those few scenes. Those trailers live up to their promise and I found this film honored the original, bringing new elements and concepts to expound upon the original premise.

Directed by Denis Villeneuve and written by Hampton Fancher and Michael Green, the movie follows a Blade Runner, LAPD officer K (Ryan Gosling), who lives in a small apartment, his only companion Joi (Ana de Armas) as he hunts down older model replicants who need ‘retiring’. In the thirty years since the events of the original film, Tyrell Corporation has been destroyed and Earth has been brought back from extinction by Niander Wallace (Jared Leto) by his re-creation of replicants that no longer have free will. 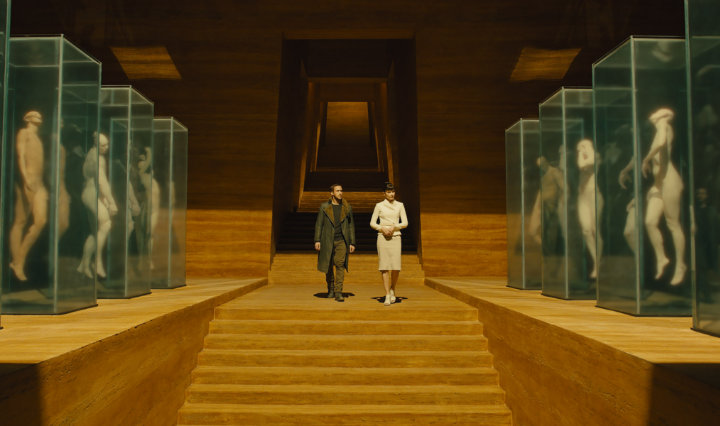 During the course of K’s work, he discovers a secret that could ‘break the world’ as Lieutenant Joshi (Robin Wright), his commander says. She instructs him to discover the heart of the mystery. In hunting down answers, he finds himself along with Joi going from the towers of Niander Wallace’s offices who speaks in riddles to the depths of K’s own memories. While K attempts to find the truth, Wallace sends his deadly handmaiden Luv (Sylvia Hoeks) to trace down the secret as well. The discovery leads him to Rick Deckard (Harrison Ford) who has answers but will he be willing to share with K? Will they find the truth before Luv?

The story is set in LA, the same mix of shiny new, giant foreboding corporate buildings and gritty underworld of poverty that the original film depicted. The filmmakers have done a credible job of maintaining the imagery and world of Blade Runner while continuing to extrapolate where advances of technology would lead us. In the world of Blade Runner 2049, replicants live shorter lives, are created to be obedient to their masters, and must take rote call and response tests to check for baseline levels. The flying cars are awesome and the details of both the replicants as well as the world are incredibly rich and complex, a mix of both the future and the past, with elements such as music from the thirties listened to with visual holographic style playing devices. There are giant ads with holograms and giant farms where all activity is completed by machines. The world is big and meshes well with the overall story.

There are little nods to the original film, both when you meet Deckard but also aspects that reference the novel as well. What is best about these references is that they are subtle and the story we are given is not overtaken by a need to be the original film, which was groundbreaking and original but the writer has avoided that, expounded on the original theme of humanity but also incorporating new thoughts, such as what it means to be free and how technology affects humanity. One of the ideas underlying is whether artificial life can develop souls and if technology can take the place of humans. The writers avoid telling you their opinions but leave enough suggestions for the viewer to decide for themselves. Those questions are part of what drove the original and help to make the new sequel engaging. While these are not original premises, they are explored well and are entertaining. 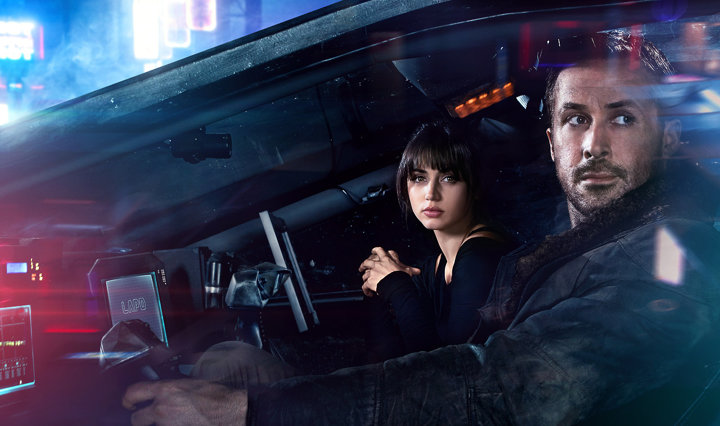 Ryan Gosling does almost the perfect job as K. He has a world-weary attitude toward his work, a resignation that he brings to it, that is the perfect touch to the character while his interactions with Joi are sweet and insightful. He truly brings the film alive for me and whereas I never really rooted for Deckard in the original film, here I find myself firmly on K’s side as he tries to discover answers. Ana de Armas is sweet as Joi, the relationship between her and K dynamic and poignant, helping to build a complexity to K’s character. Their chemistry is excellent and helps to explore the themes presented in the movie. Harrison Ford helps keep the action moving in the third act, his characterization of Deckard matching the original and he is compelling. Robin Wright is powerful as Lieutenant Joshi or Madam as K calls her, her performance as good as the major roles. Sylvia Hoeks as Luv is emotional, dark and charismatic. Jerod Leto gives an intense performance as Niander Wallace.

Where I find critique is most likely with the character of Niander Wallace. While most of the characters are fully fleshed with detailed lives, his is the only character that feels one note, with religious overtones but no real understanding of how he got that way or what his purpose is beyond creating the perfect replicant. A more fleshed out character would have given more complexity to the story. 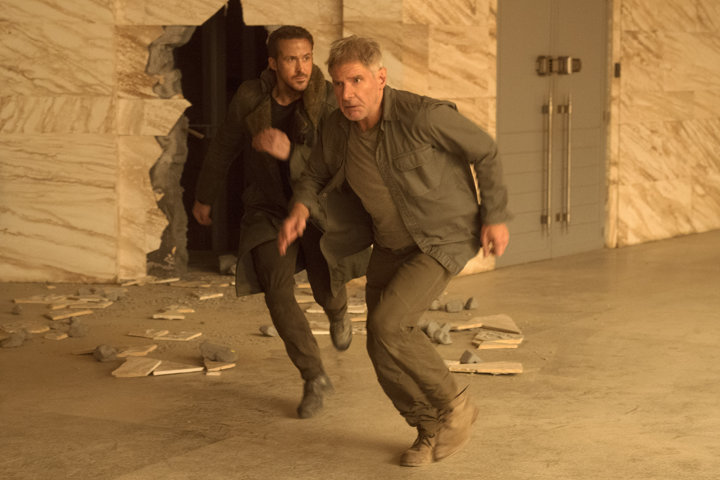 The film is also long, with moments in the middle dragging as we follow K to the truth. The action sequences do help break up the slower scenes and when we do reach the third act, I found it enthralling, the action keeping me glued to my seat as I was absorbed in the story but the length caused me some moments where I fidgeted.

While there are no original themes to the film, the world building is exquisite. The characters of K, Joi and Deckard are not only beautifully acted but also rich with detail. Luv is deadly and compelling as is Lieutenant Joshi. The action sequences kept me fully engaged in the movie and I found the themes of freedom, technology and humanity powerful, expounding on the original Blade Runner film. The filmmaking enhances that original work rather than detracting from it. I found myself entertained, adoring Ryan Gosling and thoroughly pleased with this sequel to the original Blade Runner.

New blade runner, LAPD Officer K (Ryan Gosling), unearths a long-buried secret that has the potential to plunge what’s left of society into chaos. K’s discovery leads him on a quest to find Rick Deckard (Harrison Ford), a former LAPD blade runner who has been missing for 30 years.

"Blade Runner 2049" Enhances the Classic Vision of the Original

The filmmaking enhances that original work rather than detracting from it. I found myself entertained, adoring Ryan Gosling and thoroughly pleased with this sequel to the original Blade Runner.