Watching the trailer for this film, it was clear to me from the beginning that this was going to be a story exploring the idea of legacy and loss as a deceased man returns to his home to try and reconnect with his bereft wife. What I didn’t know was how nuanced and how thought provoking the movie would be, exploring time and sound to create narrative and connect elements of the story together. 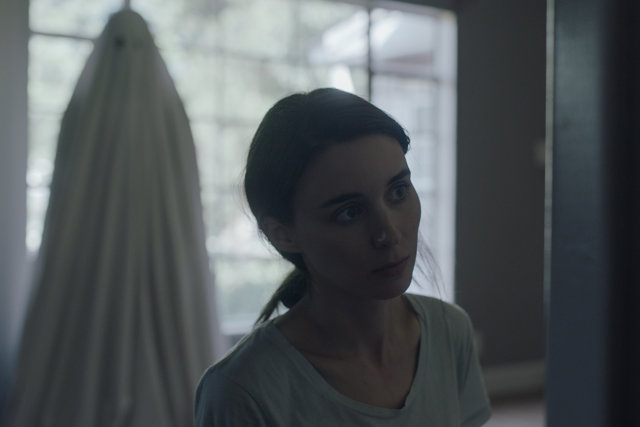 A Ghost Story stars Casey Affleck as C and Rooney Mara as his wife, M. The pair move into a house in the suburbs and encounter strange sounds and lights. Soon after they move in, C dies in a car crash and M is left behind to deal with the loss. It is at this point that the story carries forward with C, his spirit sitting up at the hospital, his silent form covered in a sheet, wandering the hospital in search of his wife. He’s offered a doorway filled with light but instead walks away, heading home to find M.

The film explores his inability to truly connect with M as she deals with her grief, examining what happens as she moves on without him, eventually moving out of the house and leaving only a solitary note hidden. He waits, attempting to reach her note, to read what she has left for him but as families and people move through the house, he is unable to reach the note, unable to reach a resolution as time moves on and he remains behind. The movie eventually tells the viewer through sound and visuals how he connects with his past self and find the closure he seeks.

Sound is used brilliantly in this film. It is a key component to the story in a way I’ve seldom seen and rarely done as well as it is executed in this movie. Each point in time is set to either a sound or lack thereof. Silence is as integral and important to conveying M’s grief as any words. Casey Affleck’s character is a composer, a songwriter and one of the songs he creates is played through a flashback to help the viewer understand the connection he and M have within their relationship. Another scene has only the sound of Rooney Mara eating a pie left for her by a friend, the sound of the metal fork clicking on the glass plate highlighting her anger and grief as she stabs at the food. This level of detail blew me away, the intensity incorporated in the sound engineering such a fundamental part of the story. 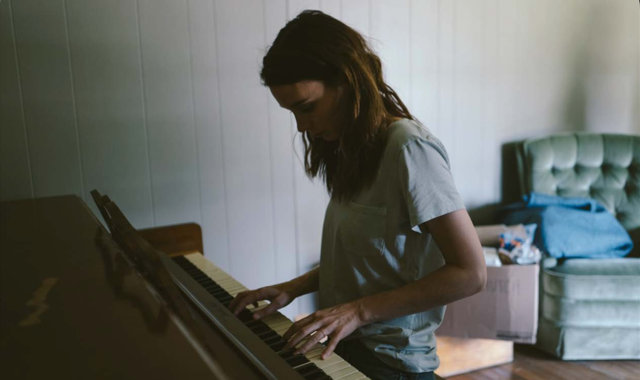 The dialogue is sparse but the movie is so well shot and framed that you don’t miss the dialogue. It’s a strange transition for me as a viewer but one that works well as the imagery and the actions of the characters drive the story. While the action is slow, especially at the beginning of the movie, much of the story is told in images such as a book being knocked off a shelf, M collapsed on the bed mourning, her grief tangible, or the ghost clawing at the frame of a door to attempt to reach the note left behind. These moments show you how C tries to find a way to connect with M, standing still while all around him time moves forward.

Time is another key component to this film, helping to connect the beginning of the film to the ending as C finds his closure, moving both forward and backward in time. Not only does the writer David Lowery, also the director, make the choice to show time as nonlinear but it shows insight into how the human spirit is not tied to the same physicality as our mortal frame, allowing an exploration of how entropy works as well as human existence. He also incorporates flashbacks, used judiciously but to great effect to allow the viewer to gain insight into the relationship between C and M.

The imagery and symbolism is clear throughout the film, doors and windows framed in every scene, showing without telling that C must move on, find a way to seek out a resolution to reach his afterlife, something beyond the stagnant existence he endures in the house he is left in. Light shows at key moments, highlighting the endurance of the human spirit beyond the physical plane. The filming is well done at these points, each scene shot and framed as a square so that the scenes are highlighted for the viewer.

The acting is equal to the story. Casey Affleck has few scenes but those he is in show the chemistry between him and Rooney Mara, a connection that’s essential to establish. As stated, Rooney Mara’s grief is palpable and believable. Her acting is a large part of what makes the film work, as she is who the viewer can connect with as the “ghost” watches her struggle and move on with her life. Strangely, as a simple sheet with eye holes, the ghost itself is beautifully acted, little details such as a hand moving forward to comfort C or clawing through the wood to reach the note grants the viewer insight into the ghost’s thoughts. The acting is subtle but beautifully done. The ghost manages to convey powerful emotions with simple gestures, no words ever used. 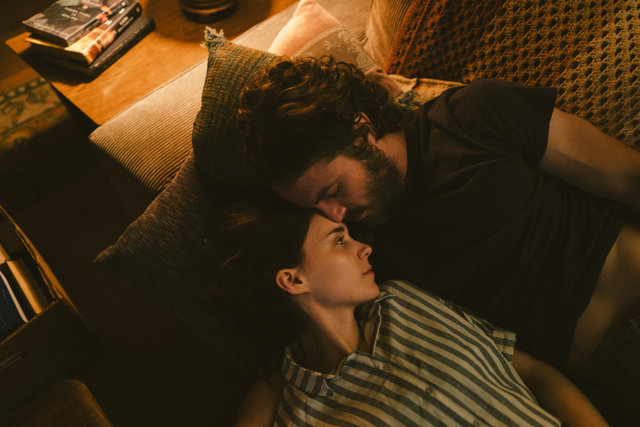 There are some elements that don’t work as well. The film has a very cerebral quality to it, almost analytical. There are points where the emotion shines through but there are also those moments when I’m thinking so hard about the symbols used in the film that I miss the emotional resonances. While this might just be me, I do think some viewers might miss some of the subtleties because of this quality. It is slow in the beginning so the viewer needs to have patience to reach the heart of the story. The other point is that as C finds his resolution, the viewer does not get to share in the discovery of what he sees, leaving me feeling a little cheated of my own resolution to the movie.

If you don’t mind a slower movie, one that is thought provoking and brilliant on many levels, I would recommend this one. It is a slow exploration of many concepts, most especially what legacy we leave behind, what we leave for others to find and what we need in order to leave the past behind us. It is intriguing that the bulk of the movie is told from the ghost’s point of view, something that is pulled off with elegance and beauty. The writer leaves you to discover your own messages in the story and the use of sound in this film is just extraordinary. I feel like I need to watch this film more than once just to appreciate all the key elements and details of the story. I also feel like this might just be a film that grows better over time.

Recently deceased, a white-sheeted ghost (Academy Award-winner Casey Affleck) returns to his suburban home to console his bereft wife (Academy Award-nominee Rooney Mara), only to find that in his spectral state he has become unstuck in time, forced to watch passively as the life he knew and the woman he loves slowly slip away. Increasingly unmoored, the ghost embarks on a cosmic journey through memory and history, confronting life’s ineffable questions and the enormity of existence. An unforgettable meditation on love and grief, A Ghost Story emerges ecstatic and surreal—a wholly-unique experience that lingers long after the credits roll.

If you don’t mind a slower movie, one that is thought provoking and brilliant on many levels, I would recommend this one. It is a slow exploration of many concepts, most especially what legacy we leave behind, what we leave for others to find and what we need in order to leave the past behind us. It is intriguing that the bulk of the movie is told from the ghost’s point of view, something that is pulled off with elegance and beauty.