True Confession: I loved Despicable Me and Despicable Me 2. I loved them a lot. However, I avoided the Minions movie, because too much of a good thing can be too much and I didn’t want to overdose on the cuteness (and all who saw it told me I was wrong and needed to see it). So, going into this movie, I had high expectations and one concern: would there be too much Minions in this?

True Confession #2: I reread my review for Despicable Me 2 before I wrote this review. Because I needed to remember how much I loved it after seeing Despicable Me 3. 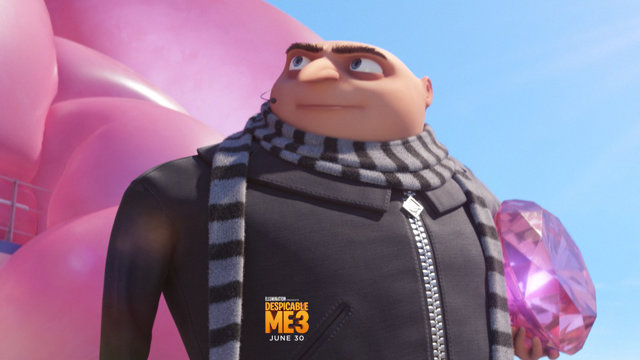 Reality: I left the theater asking for more Minions, more Gru, more girls, more of everything, except the one thing that makes this movie not nearly as good as the two prior and, from what everyone tells me, the Minions movie – the villain, Balthazar Bratt (Trey Parker). This movie could have used about two-thirds less of Bratt. Frankly, this movie could have just used an entirely different villain altogether.

It’s been four years since we’ve seen Gru (Steve Carell), his three adopted daughters, Margo (Miranda Cosgrove), Edith (Dana Gaier), and Agnes (Nev Scharell) – still stealing the show – and his new wife, Lucy (Kristin Wiig). That’s not too long in terms of animation – which is a very long form indeed – but it hasn’t been as long for the characters. Gru and Lucy are still newlyweds, hard at work trying to stop supervillain Bratt, when a new director of the Anti-Villain League comes in and causes Gru and Lucy to lose their jobs.

At the same time, all but two of the Minions quit because Gru isn’t doing evil anymore, Bratt is working on an evil master plan, Lucy is trying hard to “be” a mom to the three girls and fretting about it a lot, and Gru’s long lost twin brother, Dru (also Carell) is looking for his brother in the hopes of learning the “family business”, because Dru is not nearly as adept at it as Gru is.

Truly, most of this movie is great. The Minions are hilarious, especially their prison scenes (you read that right). The family stuff is fun, funny, sweet, and adorable, regardless of who we’re focused on or what their particular goals are in the scene. And, as always, love conquers all. There’s even a real unicorn. So to speak.

Maybe most are going to think he’s hilarious. I found him horrifically grating – a villain that wasn’t funny or entertaining – and a lot of that is probably due to Parker’s vocal take on the character, but it was more than that. His entire story is, frankly, nasty, and it’s nasty on the parts of the writers and directors. Bratt was a child star with a successful three season run playing a horribly bratty kid with a robot sidekick, Clive (Andy Nyman). But then puberty hits him hard, and his show is immediately cancelled. Bratt refuses to accept this and becomes a supervillain who’s all about the ‘80s, which is when his show was on TV. 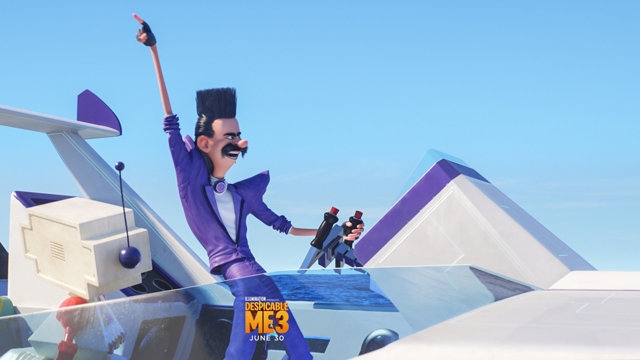 Here are my issues with this. First and foremost, in a movie aimed at children who are, themselves, going to go through puberty, showing that your character’s life is ruined by puberty isn’t, perhaps, the best choice that could be made. Secondly, Hollywood is a place that grinds child stars up and spits them out. For every Ron Howard you have the cast of Diff’rent Strokes. That someone in Hollywood (okay, the movie was written and produced in France, but still, it’s all part of the “Hollywood” brand) thought it was funny to mock a child star’s descent into madness/villainy and make that movie for children is, again, perhaps not the best choice. Bratt is never seen as a tragic figure – he’s made fun of. No one ever tries to give him the benefit of the doubt, befriend him, etc. He’s actually someone who’s been hugely successful in two careers, one in TV and one as a supervillain, but no one ever acknowledges that he’s actually pretty talented and clearly smart. He’s just a grating, one-joke character that’s got what feels like half of the screen time in the movie.

Bratt’s what’s supposed to keep the adults entertained while the ‘80’s references go over the little ones’ heads. But in a movie franchise that is, frankly, built on the sweetness of love and how families are made by choice, this villain was sour.

I expect this movie to do well, because it’s a hugely successful franchise, there’s a lot to like about it, and it has Minions in it. For me, however, it’s the weakest in the series and, frankly, weaker than a lot of its competition, again because of how the villain was handled. Here’s hoping Despicable Me 4 is a return to form. As for me, I’m going to re-watch Despicable Me and Despicable Me 2, then rent the Minions movie.

Joining Steve Carell and Kristen Wiig in Despicable Me 3 is Emmy, Tony and Grammy Award winner Trey Parker, co-creator of Comedy Central’s global phenomenon South Park and the Broadway smash The Book of Mormon. Parker voices the role of villain Balthazar Bratt, a former child star who’s grown up to become obsessed with the character he played in the ‘80s, and proves to be Gru’s most formidable nemesis to date.

I expect this movie to do well, because it’s a hugely successful franchise, there’s a lot to like about it, and it has Minions in it. For me, however, it’s the weakest in the series and, frankly, weaker than a lot of its competition, again because of how the villain was handled. Here’s hoping Despicable Me 4 is a return to form.