Preacher is a twisted no-holds barred show about a man smacked square in the face by a supernatural creature (known as Genesis) that bestows the power to make people do what it wants on its host…literally. This TV show’s an adaptation built around the central character from the comic series by Vertigo of the same name.

I saw the first episode after standing in line (happily) during Wondercon in 2016 and logged into my phone to program my DVR to record the show before the end credits rolled. Every cast member is perfect for adding needed elements and nuance to the ever-unraveling story. The backdrop and supernatural elements set the stage for a savage but insightful look into the here-and-now as well as the hereafter.

The whole premise is so madcap and full of only slightly contained violent imagery – as is should be because…source material – that I had to watch the entire season again to catch all the angles and threads laid out. It’s a mystery told through mayhem with just a touch of the mystical.

This adaptation manages to set up a storyline for the season that isn’t “dead on” its comic origins but somehow captures the essence of the series’ characters. The pilot uses all 90 of its minutes to leave you no doubt that you’re in for a multi-layered, haywire, sharp-witted, pull no punches bloody season. Everything feels driven and contemporary but just out of step enough to be otherworldly when necessary.

Returning home to keep a promise to his father, Jesse Custer (Dominic Cooper) plans to reinvigorate his dying town by bring people back to his church. There’s just a few problems with his plan:

It’s pretty clear as soon as Jesse sets foot in town, he’s got a helluva reputation. It’s even more apparent, he’s got a poorly controlled propensity for violence, but he’s trying…ish. I won’t lie, I had a hard time disagreeing with more than a few of his slips into old habits because some people really need to be punched in the face in this town. But once you meet his ex-girlfriend Tulip played with unhinged brilliance by Ruth Negga you quickly realize for all it’s over the top sequences, Preacher’s real story is in the details. 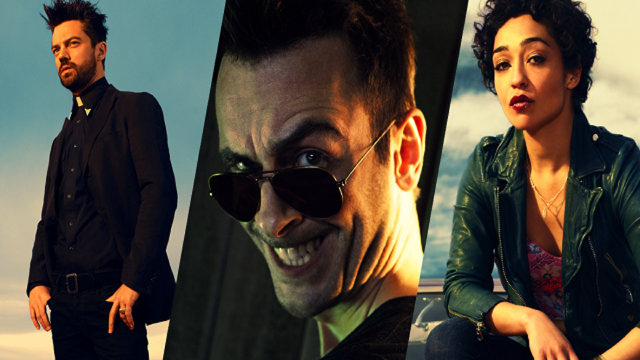 There are breadcrumbs and comic easter eggs galore throughout the remainder of the season all presented in a fashion that tugs you along despite making you blink rapidly at what you just witnessed. This show has a way with a dead body getting dead.

Tulip is a hellion with a vendetta, an inventive mean-streak a mile wide, and the crazy idea that Jesse’s hers to call to action. It takes a minute – you regret it if you don’t keep watching – to catch on to everything she represents to this storyline given her tongue-in-cheek introduction and habit of failing to explain herself but by the third episode it’s obvious that not only is she one temper tantrum away from prison, but she’s savvy, stubborn, and absolutely going to contribute greatly to Jesse’s struggle not to falter from his path. Tulip is also the gateway to the larger world slowly squeezing its grip around Jesse and the rest.

I say this to help you, after the show introduces, Cassidy (Joe Gilgun) and his utterly confounding backstory, it’s just best to throw up your hands and agree to let Preacher lead you where it will. He’s the sidekick no one needs – especially if you’re trying to reform yourself – but he’s got amazing timing when it comes to saving Jesse’s ass. Gilgun steals more than his fair share of scenes and if you don’t find yourself liking him by episode five then you’re made of more staid stuff than I.

Things only get ever-odder in the best possible b-movie, bawdy, viscerally violent ways. There’s really no way to talk about the story without spoiling some truly original and extremely left of center moments it has to offer but I will say, a) you should always watch your step while running around in your underwear at night; aka some shit you ain’t ever talking me into and b) if you have the literal power to make people do things, be specific really specific when you’re tossing out orders.

Preacher is how a TV adaptation of a comic series suited to episodic visual storytelling (seriously this comic’s been begging to be on television for ages) should be done – with character development deeply embedded to anchor the story. It’s got a pulpy, spaghetti western-ish look and feel (at turns) that’s perfect for bring its characters to life.

It’s creators smartly chose to make more of a prequel story arc to the source material. This decision permits the show the needed license to build a realistic (and completed jacked up) world for its story to latch onto while holding true to the heart and soul of the comic’s characters that are true cult fan favorites.

I can’t think of a better setting, cast, or tone this show could’ve set for this outlandish, often times confusing, story. There’s nothing like it on television and if you’re not watching it just means you don’t like yourself (seriously get this in your queue immediately) enough to traumatize your psyche properly. That being said, don’t ignore the rating. This isn’t for the kiddos in any way shape or form…unless you’re looking to answer some seriously pointed questions about the odd things adults get up to while adulting.

Season Two premieres this Sunday, June 25th, on AMC; just time enough left to catch up and get ready to kick into gear with Jesse and his crew.

One Season In: "Preacher"

Preacher is how a TV adaptation of a comic series suited to episodic visual storytelling (seriously this comic’s been begging to be on television for ages) should be done – with character development deeply embedded to anchor the story. It’s got a pulpy, spaghetti western-ish look and feel (at turns) that’s perfect for bring its characters to life.