In this age of iconic properties, owning a franchise is paramount for a studios success. Disney has Marvel/Star Wars, Warner Brothers has DC and Universal has… Monsters? Yes, the great monsters — Frankenstein, The Invisible Man, Dracula, The Creature from the Black Lagoon, The Wolf Man, and finally, The Mummy — are classics beyond reproach. One could argue the monsters are a brand unto itself and the biggest asset in Universal’s inventory.

With the major success of Marvel and Star Wars, you have perfect examples of how powerful and influential a cinematic universe can be. Influential not just in movies but with popular culture as well. Visit any comic con and you’ll see a laundry list of characters (cosplayers) lifted directly from Marvel, Star Wars and DC. Additionally, you might see any one of the classic Universal monsters roaming the floor. Clothes, toys, and food are just examples of how wide reaching a powerful property can be.

With the great success of fandom supported universes, I understand why Universal would actively pursue its monster properties. For years many fans have wanted a re-boot of the classic monster series. With the promise of greater things, Universal has launched it’s Dark Universe project. Spanning multiple movies, the greats of celluloid magic will now get their own universe to play in. Exciting news for fans right? First in line from the Dark Universe is The Mummy which should not be confused with the 1999 Brendan Fraser Mummy. Whew! I was worried the Scorpion King re-boot was next! So, does The Mummy live up to it’s long storied history? 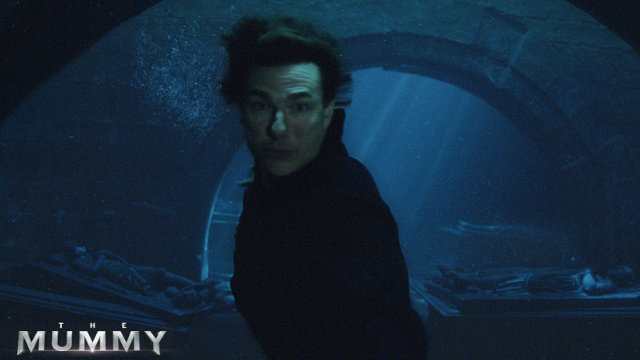 Right out of the gate, The Mummy starts with a big red flag all because of Tom Cruise. Seriously! Why in the hell did Universal enlist his acting services for a reboot of The Mummy? Not to bash Tom because I’ve enjoyed many of his movies, I just don’t believe he was the right choice for such an important start. His hiring reeks of misplaced market research and big name justification. Meh!

The movie opens with the ever ominous Crusaders burying a mysterious relic affixed to a religious character. I’m guessing this was around 1127? This of course is the establishing scene that director Alex Kurtzman uses to grab our attention. While I always enjoy a good period piece, this was not to be. Within minutes the sequence segues into modern day and things get really loud! Not just movie loud, but Tom Cruise movie loud! As with most of his films, Tom gets caught up in tomfoolery which usually leads to running and jumping away from things blowing up. He must really be fast to never get hurt!

Nick Morton (Tom Cruise) and Nick Morton (Jake Johnson) are soldiers of fortune trying to locate insurgents in Iraq all the while looking for valuable religious artifacts to steal. Along the way, they discover a hidden chamber that ends up being the lost Princess Ahmanet (Sofia Boutella) who was buried in a sarcophagus as punishment. Along for the adventure is archaeologist Jenny Halsey (Annabelle Wallis) who is overly obsessed with returning the mummified body of Princess Ahmanet to England for further study. 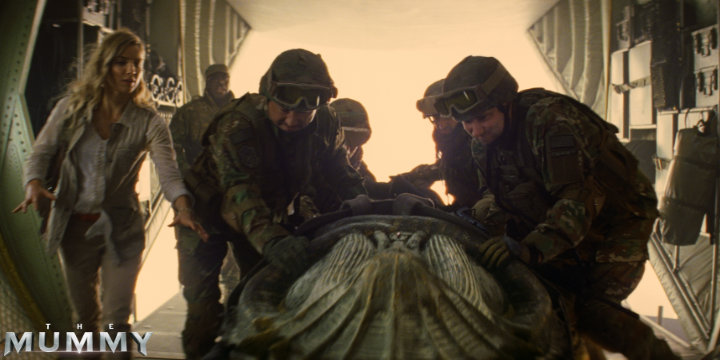 While on the way to England, the plane carrying the sarcophagus crashes and ultimately ends up lost somewhere in England. Soon after, we are introduced to Dr Henry Jekyll (Russell Crowe) who seems all to pleased with the discovery of Princes Ahmanet and the unlikely link to Nick Morton (Cruise).

The chemistry between Cruise and Wallis felt awkward and forced. Maybe it was bad direction or quite possibly the visual of Tom jumping up and down on a couch screaming “I love her!” alas, not all is bad. There were some scenes where the dialogue and punchlines instigated a chuckle from me.

Boutella has really grown as an actress. She was wonderful as Jaylah in Star Trek Beyond, and equally impressive playing the deadly assassin Gazelle in Kingsman. In her role as Princess Ahmanet, Boutella excels and does what she can with the cheesy over the top dialogue.

Russell Crowe was equally pleasant playing the complicated Dr Jekyll/Mr Hyde. In fact, his transformation to Mr. Hyde was on of the bright spots of the movie and hopefully a sign of things to come in the Dark Universe.

Whether or not the film is a success, the Dark Universe will undoubtedly proceed as planned because Universal has too much invested in it. If you are a big fan of the classic monsters then i’m sorry to say you’ll be disappointed. If a predictable cardboard thin action film is what you want, the by all means veg away. However, I’m not sure The Mummy will survive the onslaught of blockbusters that are slated this summer.

Thought safely entombed in a tomb deep beneath the unforgiving desert, an ancient princess whose destiny was unjustly taken from her is awakened in our current day, bringing with her malevolence grown over millennia and terrors that defy human comprehension.

From the sweeping sands of the Middle East through hidden labyrinths under modern-day London, The Mummy brings a surprising intensity and balance of wonder and thrills in an imaginative new take that ushers in a new world of gods and monsters.

If you are a big fan of the classic monsters then i’m sorry to say you’ll be disappointed. If a predictable cardboard thin action film is what you want, the by all means veg away. However, I’m not sure The Mummy will survive the onslaught of blockbusters that are slated this summer.