The Mummy’s touted as the first installment of the Dark Universe, bringing monsters into the modern world. So right out the gate, I knew to expect a different look and feel than a classic mummy movie; but hoped they wouldn’t completely abandon the creep-crawling, spine-chilling scare factor in the name of a “crash, bang, pow, boom” modern action movie. It stars: Sofia Boutella, Tom Cruise, Russell Crowe, Courtney B. Vance, and Annabelle Wallis. I was skeptical about most of the casting but I went in willing to give it the “these movies don’t get made without “names” attached” benefit of the doubt.

The marketed premise of The Mummy struck me as a great angle to come at this classic tale with fresh eyes and bring in some new energy, Casting Sofia Boutella, an actress becoming known for her esoteric take on characters and who – being born just three countries to the left of Egypt – brings a more regionally authentic look to the character Ahmanet than Hollywood ever bothers to get right when it matters (and regardless what they think, it always matters), as a female mummy seemed like a pretty great idea as well. I won’t lie, I really like monster movies and B-Movies so, I’m often hard on films that pull from that source. But I reminded myself this film’s being released as a summer (popcorn) flick and checked my expectations at the door. 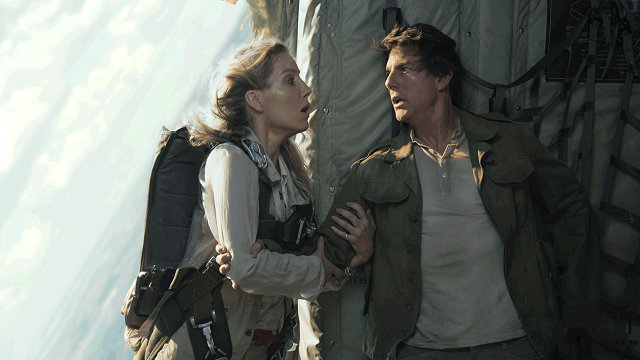 The films’s action sequences are well designed, and well shot. Their placement in the story arc feel necessary and work well to build a story that, surprisingly enough, keeps you fully engaged. Director Alex Kurtzman creates more than a few scenes with a tangible “things go bump in the night” edge that work really well. But he modernized some classic B-movie set ups and threw in (painfully obvious) easter eggs for the Dark Universe films to come all over the place that don’t play in the plot as well.

The introduction of Henry Jekyll (Russell Crowe) brings the macro elements of the story online teasing greater monster mysteries and tales to be told employing small dramatic moments to excellent effect. After seeing two scenes in particular, I’m not even (as) mad at his casting anymore – although I will say his movie needs to be soon or no one’s going to buy his Jekyll/Hyde (he’s looking a little rough around more than the edges – that’s right, I said it) as more than the an aging living relic. Jekyll and his agents are hunters of evil. The film makes it clear Jekyll’s life’s work and the entire facility exist to stand between mankind and the darker destructive forces; he’ll do whatever’s necessary to serve his mission. 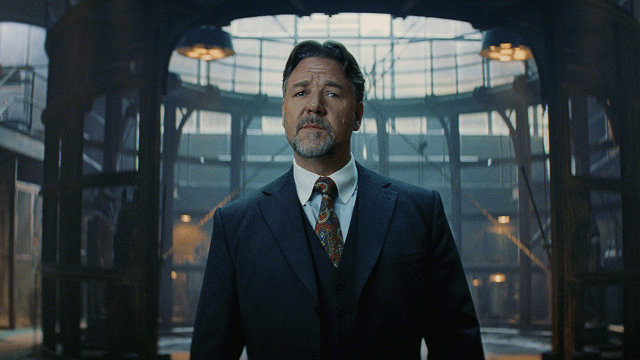 It’s a good lead in; creates a clear moral line in the sand while blurring the human elements towards the realistic shades of grey that truly drive people’s decisions. The Mummy maintains its slightly darker slant throughout, which is never a bad thing, but it made more than a few attempted comedic moments feel over done (sorry Jake) and extremely out of place.

From the start of the second half of the film to finish, it just tries too hard; much too hard and ends up undoing all the work of the first half of the film and wrecking any interest you may have in future tales. The Mummy is was far better than I thought it would be and that made its problems that much worse. I’d started to buy into the story they were telling and then for some inexplicable reason, it decided to stop that story and give me a generic bunch of bunk. The film turned to the tale it laid out so well and set it on fire. If The Mummy hadn’t made the stupid decision to tangle its entire fate up in Nick Morton’s (Cruise) pedantic story arc it might have been more than just a throw away film. dammit.

I blame all the screenwriters of The Mummy for my inability to give you a spoiler-free review. This movie pushed me all the way into my feelings (the attitudie ones) so, my bad in advance.

*hereinafter there may be spoilers*

This mummy tale centers it’s myth around an ancient princess named Ahmanet (Sofia Boutella) entombed – alive – to keep an even greater “evil” from being unleashed upon the world at her hand and as eternal punishment for her crimes against her father, the Pharaoh. Her fate is being lost to history. It’s not really a remake of the classic tale of the mummy or a relaunch of the Fraser-led franchise. 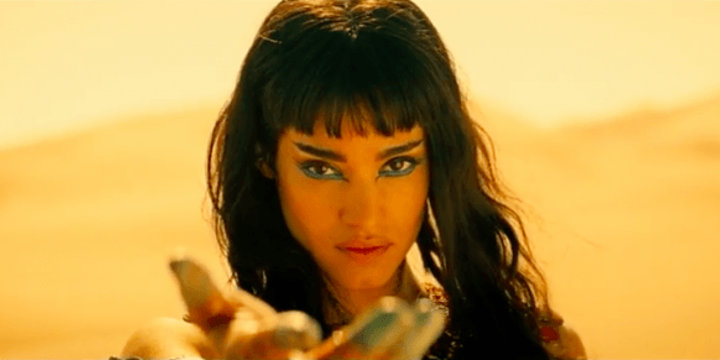 The flashback vignette introducing Ahmanet and telling of her life is some absolutely gorgeous camera work of lovely vistas and lavish sets. It displays some of the best moments of movement and drama in this thin-ass film. Ahmanet, only child of the ruling Pharaoh raised to be perfect in all things and ruthless in her dealings is a fierce warrior fully prepared to become a living-god(ess) to her people.

She’s painted as the apple of her father’s eye and the center of his world…until his favorite concubine births him a son. Seeing her future drift into obscurity, Ahmanet makes a bargain with a god, Set, for power because as the movie says, power must be taken.

So far so good right? 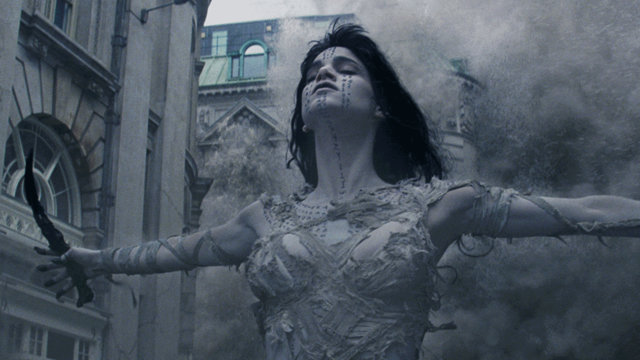 Sure…for the half a minute it takes you to unpack this -ish and realize it’s some insulting-as-hell bs.

Why you ask? Let me make you a list:

All of this is some seriously unnecessary patriarchal whitewashing of magic and mythology to force it into a shallow “good and evil” mold that’s horribly ill-fitting, been done to death, and is mind-numbing in its stupidity. It’s all about building in the idea of “the deal with the devil” because every ancient culture (and their religions) align perfectly with western white sensibilities…right?

This film built a premise that was a perfect opportunity to present an actually complex villain and follow through with a fresh take on a legend and an interesting action adventure without need of knee-jerking to raiding and pillaging history haphazardly and with extreme prejudice but instead The Mummy punted…hardcore.

Watching as this film builds a kick-ass character taking the time to get the audience to fully invest in her history and giving us Boutella in the role (and her doing it justice) only to reduce her to being just a vehicle to drive Nick Morton’s story arc made my brain itch and my eye twitch. They wasted her. Completely. Wasted. Her.

And since I brought him up, let’s discuss Tom Cruise shall we? 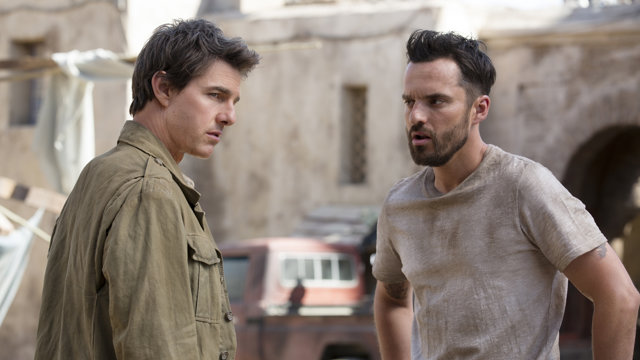 We drop into current day Iraq where we meet the intrepid Nick Morton (Tom Cruise) and his sidekick Chris Vail (played with far too over-the-top comedic effect by Jake Johnson) missing from some vague military assignment – because active duty soldiers can just go absent from post all willy-nilly and rush around a war zone no problem – in search of relics to sell on the black market. Morton’s nefarious motives firmly established, we now have our questionable protagonist – make no mistake this joker’s the (anti)hero – obviously about to lead us to our ancient (living) artifact….

As a way to explain their presence in the desert, it works. As further unnecessary bastardization of history and side-eye to the current state of Iraq? Check. As an unintended acknowledgement that a white dude bumbling about messing with things a) he doesn’t even try to understand, and b) should really leave the hell alone is totally gonna be responsible for the destruction of the entire world? Dead. On. Point. 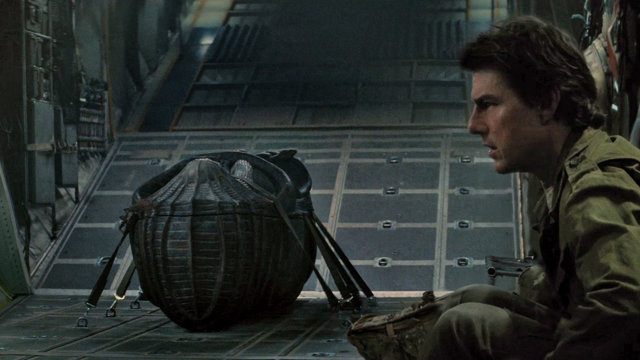 Morton is a neck-or-nothing adventurer played with a dab hand by Cruise. His surface charm, laconic wit, and deadpan delivery are at his signature best and keep this recklessly self-centered, greedy character just to the left of irredeemably unsavory. His sidekick, Chris is the paper-cutter comic relief and sticks out like a sore thumb in this obvious attempt to tie in touches of the comedic-stylings of the Frazier-led film. He says the things that need to be said to drive home how self-motivated and reckless his buddy is and ensures he’s not alone is his greed (because a greedy, sticky-fingered duo is so much better).

I feel I should say I am not anti-Cruise. I’ve frequently enjoyed movies he’s been in and felt his presence brought something to the part another actor couldn’t. What I’m saying is this part isn’t enhanced or made memorable by Cruise. They tried to do too much around him to make up for the lack of depth given to this character and it showed. To the detriment of the film, it showed.

and all this is before we get to the cookie-cutter cutesy, doesn’t even pretend to be good at her archeologist job, I’m really just here for cheerleading, and so utterly forgettable I’m not even putting your character name in this sentence, blonde….

Sidenote: can we PLEASE pick another historical group/time to tie everything back to Europe already…ya’ll killing me with the overuse of the Crusades when ya’ll don’t wanna talk about how folks really acted during the Crusades

Thought safely entombed in a tomb deep beneath the unforgiving desert, an ancient princess whose destiny was unjustly taken from her is awakened in our current day, bringing with her malevolence grown over millennia and terrors that defy human comprehension.

From the sweeping sands of the Middle East through hidden labyrinths under modern-day London, The Mummy brings a surprising intensity and balance of wonder and thrills in an imaginative new take that ushers in a new world of gods and monsters.

The Mummy is was far better than I thought it would be and that made its problems that much worse. I’d started to buy into the story they were telling and then for some inexplicable reason, it decided to stop that story and give me a generic bunch of bunk. The film turned to the tale it laid out so well and set it on fire. If The Mummy hadn’t made the stupid decision to tangle its entire fate up in Nick Morton’s (Cruise) pedantic story arc it might have been more than just a throw away film. dammit.