Jacob Latimore plays the self-effacing and charismatic street magician Bo. Like many young men (of color), when faced with doing what’s best for himself and what’s best for his family; Bo chooses to do what’s necessary to take care of his family. He goes to work for Angelo (Dulé Hill) dealing drugs to the party crowd. It’s a choice that puts food on the table and seems harmless enough (we’re all adults, here right?) he’s not standing on street corners outside schools, he’s not haunting a crime infested block crawling with tweakers and Angelo, doesn’t act the “gangster.” Dulé Hill – giving an affably intense, wholly believable portrayal that reminded me of more than one business major-having college classmate – perfectly embodies the respectable criminal. Which may confuse some audience members unused to seeing anyone other than a well-heeled young white man in this type of role. He’s not a foul-mouthed, unintelligible gang-banger living in a broken-down row house or over blown estate. He lives in nice house, in a nice neighborhood, dresses well but not too flashy; like any entrepreneurial-minded business man growing his empire. He just also happens to be a cutthroat, ruthless drug dealer reeling Bo further into his organization step-by-step.

To anyone who doesn’t live under a rock, or in a gated community, Sleight’s a familiar enough story: gifted young man’s promising future snatched from his grasp by the merest shift in fate. He makes choices that pull him further and further away from that hopeful future and down a path that leads nowhere good. Only, this a movie isn’t about how “good” kid turns bad and becomes so drenched in darkness there’s no turning back.

Unlike many movies tackling this theme, writers J.D. Dillard, and Alex Theurer gave their central character a more realistic personality. Bo doesn’t stop being the young man looking at a bright future. He loves magic and approaches it with a simplistic purity that speaks of dedication and commitment. He still adorably awkward around the girl he likes (Seychelle Gabriel) and is the kind of guy who still has friends and a neighbor (Sasheer Zamata) more than happy to share a meal or give him advice. His decision to take another path doesn’t leak the light from his soul leaving behind the stereotypical manifestations of a man dragged into “the life” by circumstance and kept their no matter his desire to exit. He isn’t a “shadow of himself” drained of life and interest. He isn’t without compassion, empathy, or conscience. He’s a thinking, feeling, and very much still the young man who earned that bright future. In other words, this isn’t just another Hollywood take on life in the “inescapable” ‘hood. 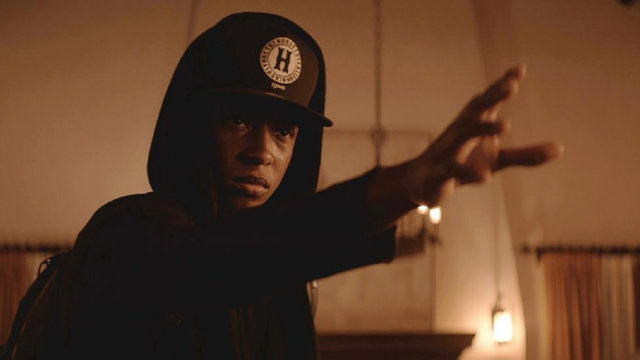 Director J.D. Dillard balances the ever-increasing risk – and violence – of Bo’s life-choice (this isn’t a lifestyle, no matter what televisions tells you) with scenes of who Bo is beyond his job. He’s an engineer. He tinkers and builds devices, even going so far as using his skills to modify himself to craft his magician game. He’s a caring, involved, responsible older brother and a supportive boyfriend. In short, he’s a great guy doing a stupid, stupid thing for a living. Dillard tells his story told in a straightforward fashion with effective lighting choices, locations and on-point song selections for the score. There’s no “downtime” in the story progression; Dillard keeps things moving at a steady interesting pace. Each piece fits lock-step to the next building to the moment when Bo fully embraces what he must do, who he must choose to be in order to escape his self-made prison. He didn’t stumble into a superpower; his money didn’t allow him to build kickass toys in his luxurious lab. Bo’s superpower comes from the application of will, his mind and fully giving over his body to the cause (Tony Stark would be proud).

Sleight consciously focuses more on how the gradual slide further into a criminal life can steal away choice and make dangerous desperate moves seem like the only way forward. These are lives being lived, consequence in action and the movie is all the better for its relatable underpinnings. You know this kid, you went to school with this kid…he’s the wicked smart one who fell of the grid after graduation and people ask, “whatever happen to…” at reunions. It’s a revitalized take on a beaten to death theme readily incorporating a necessary density to a character it’s far past time it was granted.

With just the right cast and on point direction, Sleight delivered outside expectation. This is the story of an emerging superhero and as origin stories go, it’s not perfect but it’s pretty damn good. The movie’s indie feel properly invokes a comic book vibe that’s completely fitting for both the story and the pacing. I could easily envision this as a story told in panels.

In what shows a keen bit of marketing savvy and excellent timing, Blumhouse Productions released Sleight on International Superhero Day (April 28). You may not walk into the theater thinking you’re about to watch a superhero movie, but you’ll undoubtedly walk out knowing you did.

A young street magician (Jacob Latimore) is left to care for his little sister after their parents’ death and turns to illegal activities to keep a roof over their heads. When he gets in too deep, his sister is kidnapped and he is forced to use his magic and brilliant mind to save her.

With just the right cast and on point direction, Sleight delivered outside expectation. This is the story of an emerging superhero and as origin stories go, it’s not perfect but it’s pretty damn good.