Welcome to Rhonda’s new column, “I Don’t Know About You, But…” where she will unleash her inner geek, both curious and annoyed, depending on what the conversation is about. You can find more Reviews and Rants by Rhonda at shelfenvy.com, follow her on Twitter @BookBlerd, or read more of her reviews and commentary here!

If you’re looking for my spoiler-free review, you’ll find it here.

When I saw a 15-minute preview of the 2017 Ghost in the Shell, in February, my first, second, and third thought was, did I just watch them take the brain out a Japanese woman and insert it into a white woman?…

I don’t know about you but, that screams no – as in hell no – to me. Critic (and all around badass Blerd) Valerie Complex discusses it rather pointedly in her March 10th piece about the preview over at Nerds of Color so I won’t rehash what’s already been said well.

Before you stop reading, I know (but honestly don’t care, we live here too dammit) how some people feel about the seemingly constant barrage of think pieces and commentary on diversity in film and television, I’d ask that you think about what I said: they took the brain out a clearly Asian woman’s head and integrated it into a cybernetic body to be portrayed by a plainly Caucasian woman. 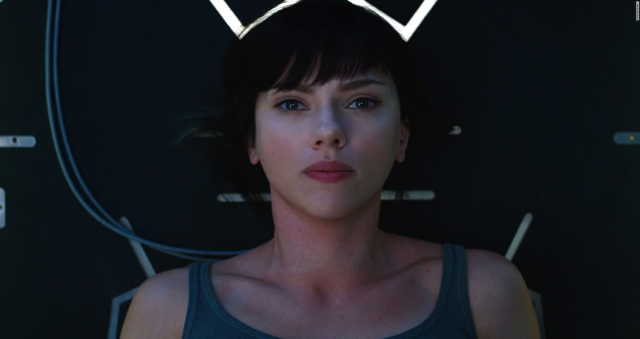 In what world can a film pull a move like that and then think to say it didn’t whitewash a non-white character out of existence? This is far more than that; they obliterated an Asian person ON SCREEN as part of the opening sequence; she’s physically reduced to nothingness, not even her name survives. Johannsen’s wakes to a new job and title.

My movie companion told me afterwards I audibly said, “what the fresh hell?!” when it happened. I believe her because I was absolutely stunned at the brazenness of it all.

Right then and there I knew two things definitively:

1. I would be conflicted (re: likely pissed off) about the story they chose to tell, and
2. No way in hell can you maneuver around the completely and utterly jacked up casting and script choices made for this property.

Ghost in the Shell is set in 2029 Japan in a sprawling, technologically advanced metropolis. It’s a cyberpunk future not an alternate universe where ethnicity itself burned away in whatever apocalypse generally wipes the majority of people of color from the face of the planet (and apparently known universe) in the books, films, and minds of white creators; the inhabitants of the continent are still made up of who they were prior to such technological advancement.

What does that signify, you ask? Well, when in doubt as to the racial or ethnic makeup of a potentially ambiguous looking character, your default isn’t — or rather, shouldn’t be — a Caucasian person… because, Asia even in the future still won’t have a mostly white population.

That’s right I said it. The knee-jerk tendency of white people to see whiteness everywhere is the underlying problem and bias at the root of the diversity conversation. White people firmly believe their mind’s eye determines what’s normal, what is right; and when in doubt, what’s right is almost without question derived exclusively from whiteness.

The 1995 Ghost in the Shell presented a complicated, strong female protagonist fully rooted in a multifaceted world full of melees, mayhem, and post-cyberpunk wildness. It stood head and shoulders above other anime and crossed gender, racial, ethnic lines, and language barriers to capture (and keep hold of) its audience.

Enter the very, very, very not Asian, Scarlett Johannsen. When the announcement hit, she’d been cast as Major Kusanagi – called just the Major in a further attempt to run game on the public because dropping a last name totally breaks one’s connection to their ethnicity, – I was wicked pissed; as in throw shit across the room livid. Ghost in the Shell is a top shelf anime movie. This is true not simply because it was a visual step outside and beyond others in 1995, (and frankly now) but because it was a brilliant meeting of mind, heart, and soul. Mamoru Oshii brought existential realism and ideological complexity together then took its audience on a journey into the self, exploring the very idea of consciousness. It was deep, visceral, ambiguous, and thought provoking. It was bloody and violent in service of both the thriller and the greater questions being addressed through action. What it wasn’t was cannon fodder catering to western sensibilities.

The quality bar was high from the outset; therefore, contemplating a live action version of this property should (have been) be a thoughtful endeavor at every step of the process.

Instead, this movie is some multilevel BS:

editor’s note: Nope. I see I have work to do to encourage Ro to not hold back!

Then you have real world moments like Scarlett Johansen doubling down on the tone-deaf rebuttal to the white-washing issue in a Marie Claire interview:

“I certainly would never presume to play another race of a person. Diversity is important in Hollywood, and I would never want to feel like I was playing a character that was offensive.”

These decisions illustrate the creators’ color-struck and callous disregard for real representation in the movie. Producer Steven Paul tries to sell to the public the idea, “[it’s] a very international story, and it wasn’t just focused on [the] Japanese; it was supposed to be an entire world.” Statements such as hers and the movie’s sledgehammer messaging tactics are offensive and likely to widen the gulf between this film and those displeased in the fandom — I know it did for me.

Apparently, Paul’s idea of taking an “international approach” is believing any yellow, brown, or black face among the cast is sufficient to check the box of diversity despite few if any holding leading roles. A mixed cast is not satisfactory representation where the core story being told is not only set in a Japanese city but built on a decidedly non-western, specifically Asian cultural sensibility.

But hey, we’re all just humans here and so long as everyone remembers that whiteness reigns supreme in the hierarchy everyone’s welcome… right?

I freely acknowledge and admit I went into this movie predisposed against the lead actress selection. I freely admit I was concerned over the choice of director — except for knowing he’d upholding the necessary level of visual appeal Sanders was a questionable choice in my opinion. I freely admit and acknowledge I was deeply concerned about what would be in the script and what would it mean to the core of what is GITS. I supposed the movie at best would be a visual spectacle full of itself or and at worse unrecognizable to the source material but an ok sci-fi action movie.

It was neither and yet somehow so much worse. Jaime Moss’s script is a soulless, self-indulgent plodding, down-right disrespectful, lazy creation. Moss ripped the heart out of Ghost in the Shell, threw a beautiful, soulless corpse at our feet then implied this is our future.

He may have read the source material, he may have seen the movies, but he didn’t understand a damn thing.

Ghost in the Shell is a movie length PSA perpetuating some Ralph Ellison’s Invisible Man-level propaganda: That your ethnic identity isn’t really part of what makes up your soul and that your past or experiences aren’t essential parts of your individuality. Mankind’s future path is cybernetic enhancement; to flee flawed native shells to inhabit perfect white bodies. 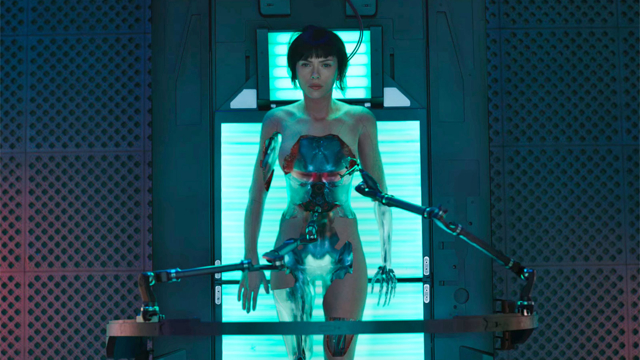 This movie doesn’t merely supplant an Asian face with a white one; it devalues and diminishes race and ethnicity entirely in a wholesale attempt to blot them out (Jung would be highly displeased).

But mayhap due to the brilliance of the original manga and 1995 film, the 2017 version inadvertently tells on its own damn self at multiple turns. The irony is the creators live in such a “white-locked” bubble they didn’t even realize they’ve voiced the quintessential objection to assimilation when the leader of a conglomerate of African nations posits, (I’m paraphrasing here) no one knows what these enhancements does to one’s ghost…to the soul. They seemingly remain cluelessas the film later self-identifies the path forward when Aramaki, played to excellent effect by Takeshi Kitano, says to the Major, “It’s only when we see our uniqueness as a virtue that we are truly at peace.” (still paraphrasing)

To have these moments hit and connect with an audience – and they do – further highlights the sheer hubris of this films’ creators and how completely the end product misses the mark. On some level the writer knew he was stripping something essential from the soul of the movie, and did it anyway.

I don’t know about you but:

I’m past tired of being expected to accept pretty, empty films in the place of impactful, real, and realistic worlds that don’t imply that white people are just waiting on whatever’s coming to kill us all off in droves – but leaving enough to fulfill service needs naturally — so they can live a in racially/ethnically homogenous utopian paradise.

Related:
IGN: Original Ghost In The Shell Director Mamoru Oshii Has No Problem With Live-Action Remake