Adam Collis is a filmmaker and film professor teaching at Arizona State University in conjunction with the Film Spark program. Designed to help students opportunities to participate in immersive professional development projects, the program brings film professionals together with the students eager to learn filmmaking practices and techniques that will help their coursework and careers.

Working from a script written by Arizona native Mark King, Collis recognized with CAR DOGS that he had the perfect project to showcase a new model of independent filmmaking — students would be assigned to specific departments of the production rather than being relegated to unchallenging positions as gofers, giving them a chance to gain hands-on production experience in addition to earning their first actual production credits.

With the production of CAR DOGS, 85 ASU students received the chance to get hands-on experience, learning film production by working on an independent feature made entirely in Arizona, featuring an award-winning cast and crew, including Nia Vardalos, George Lopez, and Patrick J. Adams, with a feature cameo by Octavia Spencer. The opportunity to work alongside Hollywood professionals provided a learning experience like no other.

Collis’ inspiration came from wanting to connect FilmSpark students directly with working Hollywood professionals, fueled by a desire to leverage advanced and improving internet video conferencing technologies. The resulting ease with which working pros in Hollywood could talk with the eager Tempe-based students increased both student engagement and Hollywood interest in growing the conversations.

This led to a daylong intercollegiate video conference between ASU, Duke, Quinnipiac, Montana, UCLA Anderson, on the making of an independent film, which was the award-winning JUNO, where the students talked with Jason Reitman and other key members of the production crew and the business side of Fox Searchlight about making that movie.

The success of those talks led to the “Hollywood Invades Tempe” program, where working Hollywood professionals talk to ASU students about the making of a selected film. The most recent in this series was MINORITY REPORT in November 2016, and the students got a chance to screen the movie and talk with Walter Parkes about story. Parkes had created a think tank to help Steven Spielberg, by putting a collection of futurists in a single location where Spielberg could ask as many questions as he needed to create the technology he wanted to put on display in the movie MINORITY REPORT, in fact inventing the technology of the future that didn’t quite exist yet, just for the movie.

The Walter Parkes event was a huge success, as were the discussions with the futurists who’d helped Spielberg shape his vision of the story.

Adam Collis is just one of many who believe that original big screen cinema is a dying art, primarily because of the reliance on branding and the financial attachment and dependence on franchises with their continual churn of sequels and prequels. But the desire for cost savings on marketing and production costs comes at the expense of stories and cultivating audience experiences, as we had in the past with films like Blade Runner, Raiders of the Lost Ark and Close Encounters of the Third Kind. With budgets and production by committee, would those movies be made in today’s Hollywood climate? Or unknown quantities that became audience favorites like The Big Lebowski or Star Wars: A New Hope? Collis doesn’t think so.

Accessible mainstream original works of cinema that work on the big screen are important to Collis, and that goal is what he sees as part of FilmSpark’s mission, to instill an enterprising, innovative and creative streak in the film students who come through the program, and making CAR DOGS in a completely new way is an important foundation for taking that vision forward, as well as the business models that make it work. They even came up with an entirely new business model for film financing, which allowed CAR DOGS to move forward. Described as “a Glengarry Glen Ross in a car dealership,” new production models were designed to incorporate effective learning experiences for the participating students. 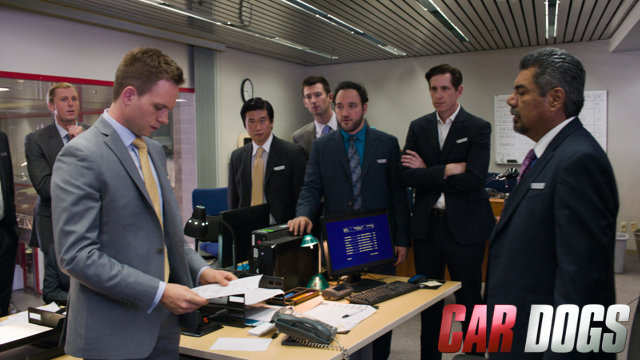 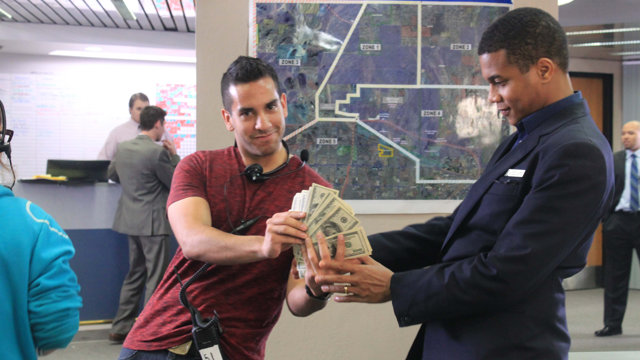 In addition to improving development models and financial models for independently created films, to improve their chances to serve as practical instructional experiences for film students, Collis is also interested in developing new ways to approach indie film distribution and promotion & marketing, beyond the word-of-mouth reliance on critics at high profile film festivals like Sundance and SXSW. His passion for innovating the independent film is invigorating and contagious, and his desire to see this development & financing format spread to other film programs at other institutions around the country and the world.

It’s safe to say that Film Spark’s involvement in the creation of CAR DOGS has successfully taken that next leap.

The end result is an enjoyable film with heart. CAR DOGS is more than a story about power struggles and relationship dynamics in a hyper-competitive high end new car sales environment, it’s a poignant examination of loyalty, friendships and integrity when pressured by ambitions and perceptions of what success means… something that applies to the care and dedication that went into the making of the film as well.

CAR DOGS is playing in Harkins Theaters exclusively around Arizona.

With everything to gain, and even more to lose, Mark Chamberlain (Patrick J. Adams) and his brazen sales team have just eight hours to sell more cars than have ever been sold in a single day. As the clock ticks down, their outrageous tactics step up, with each salesperson ready to do whatever it takes to be top “car dog”. But for Mark, the stakes are much more than a paycheck. Leading the pack is sales vet, Christian Caldera (George Lopez). He’s slick, fast talking, and conniving; able to get customers to both open their wallets and part with their better judgement. Hot on his heels is Sharon Stavron (Nia Vardalos). She’s smart and savvy, outmaneuvering the competition with her wit and charm. Sales vet, Scott Williams (Dash Mihok), has a baby on the way that’s keeping him from doing his job. Mark’s best friend, Boyd Robertson (Cory Hardrict), wants the best for Mark but also for the team. And Tyler Bedloe (Joe Massingill) is the rookie of the team, trying to compensate with enthusiasm for his lack of experience – though that may not be enough to get him through the good natured hazing that is the rite of passage for all “newbies”.

Undermining the team’s efforts is Mike Reynolds (Josh Hopkins), Mark’s underhanded and manipulative rival who has an agenda all his own. As victory comes within reach, Mark is pushed further to the edge by his ruthless and manipulative boss, Malcolm Chamberlain (Chris Mulkey), who also happens to be his father. Mark is forced to come face to face with his own reality. Is he his father? Or is he a man who can stand on his own two feet? And in one incredibly tense and life changing moment, he must decide if he can save his team, retain his self-respect, and still come out ahead of his old man.