I can carry a tune; carefully with both hands… but that’s about it. I’m like most people who’ve got an ear for music but no talent for the singing; more than slightly obsessed with animated singing cartoons. But you can’t just go throwing some tunes on screen and expect me to be all in. I’ve got standards, blame Disney and Pixar, you must hit me somewhere good and give me a reason to add you to my wall of animated singing glory (yes, I have a shelf of movies that all require singing to happen – sooooo).

Sing has a back story familiar in the animated movie world. Anthropomorphized animals living in a parallel world to the human world going through life struggles with theme songs and musical soliloquies. But it doesn’t feel like it’s already been “done” and the daily life and struggles in this town populated by animals provides a relatable background to pull you into the story without wasting opportunities for authentic and touching moments made more so by combining them with satirical hilarity and off-color humor – there a very good reason it’s PG and not G.

Buster Moon is a too slick for his own good theater owner who’s living his life one step ahead of creditors and a final cut off notice from the electric company. Clinging to his dream has brought out the huckster in him. Buster voiced by Mathew McConaughey comes across more as unbelievably optimistic than shifty – trust me this character cuts it a little close to the ponzi-scheme runner edge. You’ve got the quirky (glass eye-having) ancient-as-all-get-out assistant who of course has our beleaguered theater owners back no matter how much things are falling apart or going awry. She makes a massive mistake (this is why copy editing is important before going to press, people) which becomes the secret waiting in the wings to drop the other shoe of disaster on Buster’s head… or so you think. 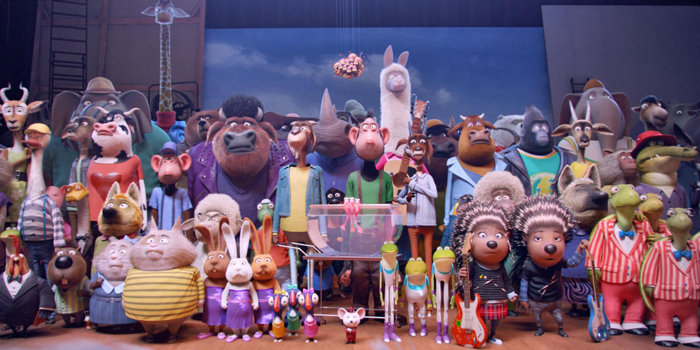 Each of the contestants have a mini-backstory that explains what brings them (or holds them back from) to the stage and there’s something in each storyline to interest each movie go-er:

— You’ve got the rock chick Ash (voiced by Scarlett Johansson) playing second string to her boyfriend with delusions of rock greatness Lance (voiced by Beck Bennett).

— The talented stay-at-home mom Rosita (voiced by Reese Witherspoon) who put her career aspirations aside to marry and raise her (25) children and support her career-focused, completely tuned out husband, Norman (Nick Offerman).

— Smooth-talking street hustler and saxophonist Mike (voiced by Seth MacFarlane) looking to parlay his participation – an anticipation of winning the big prize – in the singing competition into cash that opens the doors to the life of status, luxury, and wealth he’s intent on becoming accustom to.

— Street tough Johnny (voiced by Taron Egerton) son of “smash and grab” gang leader Big Daddy (voiced Peter Serafinowicz) he’s living – reluctantly – with both feet in the underworld and his heads in the clouds where the music’s calling his name.

— Then there’s Meena (voiced by Tori Kelly) sweet and shy with a killer voice and a huge case of stage fright with a little social anxiety to even things out.

They’re all here for different reasons. They’ll be at least one you can behind. The secondary characters and scenes add color and flavor like any good animated movie should. The music is an ode to some of the best (and worst) popular music as to offer. There’s a good enough mixed bag of songs from past decades (it’s a little like name that tune with the song snippets) to hit the spot for all age groups. Honestly some of the best irony and hilarity in the movie are the song match-ups to animal characters during the audition process. It’s well drawn and nicely paced to keep you interested and entertained. The story has its sad moments – let’s just say I have mad respect for what Buster’s dad did to raise the money for him to buy the theater in the first place – coupled with ridiculousness to keep it from being bogged down in the maudlin.

This movie isn’t trying to make you dig for deep emotions or push you to make sweeping philosophical changes to your life view. But it’s got some down to earth and simplistic lessons about being honest, asking for help, owning your mistakes, and not giving up.

Sing is part love letter to the shrinking world of theater and live music venues and a call to arms for going after your dreams and seeing your success as possible long after everyone else has written you off. It’s equal parts simple entertainment and commentary into how we relate to ourselves and each other.

It’s not the best I’ve ever seen but it certainly makes my list movies I’ll watch to adjust my mood without putting me through the ringer.

An animated movie sprinkled with musical moments about a down on his luck koala trying to save his dream by hosting a singing competition that in turn fuels the ambition of other dreamers…that’s totally what we need for the Holiday viewing schedule. Right?

Set in a world like ours but entirely inhabited by animals, Sing stars Buster Moon (Academy Award® winner Matthew McConaughey), a dapper Koala who presides over a once-grand theater that has fallen on hard times. Buster is an eternal optimist—okay, maybe a bit of a scoundrel—who loves his theater above all and will do anything to preserve it. Now facing the crumbling of his life’s ambition, he has one final chance to restore his fading jewel to its former glory by producing the world’s greatest singing competition.

Five lead contestants emerge: A mouse (Seth MacFarlane) who croons as smoothly as he cons, a timid teenage elephant (Tori Kelly) with an enormous case of stage fright, an overtaxed mother (Academy Award® winner Reese Witherspoon) run ragged tending a litter of 25 piglets, a young gangster gorilla (Taron Egerton) looking to break free of his family’s felonies, and a punk-rock porcupine (Scarlett Johansson) struggling to shed her arrogant boyfriend and go solo. Each animal arrives under Buster’s marquee believing that this is their shot to change the course of their life.

This movie isn’t trying to make you dig for deep emotions or push you to make sweeping philosophical changes to your life view. But it’s got some down to earth and simplistic lessons about being honest, asking for help, owning your mistakes, and not giving up.

Sing is part love letter to the shrinking world of theater and live music venues and a call to arms for going after your dreams and seeing your success as possible long after everyone else has written you off. It’s equal parts simple entertainment and commentary into how we relate to ourselves and each other.