Westworld is a futuristic (dark) sci-fi-drama centered around a resort with a fully immersive Wild West theme. It’s has rolling vistas, beautiful country side, cattle drives, with a train weaving through it all only to come to a halt in a quintessential western town. It’s a perfectly designed sandbox game, the ultimate in-game experiences just waiting to be had.

The town presents a mixed bag of all the stereotypical elements one expects to find on the frontier. Bar maids, brothels, man-hunts, gold prospectors, cattlemen, outlaws, gunslingers, soldiers, homesteaders and frontier folk going about their business as though it’s just another day. Each an android actor designed to entertain; a “Host” set to trigger a particular storyline or begin an adventure-nice nod to the RPG aficionados among the audience members, I think. All this for the amusement, titillation and gratification of the (paying) Visitors. Each adventure comes with the promise they’ll come away (mostly) unscathed no matter what vice they choose to indulge-including murder. There’s plenty game play options here to leave any MMO junkie gagging in envy. 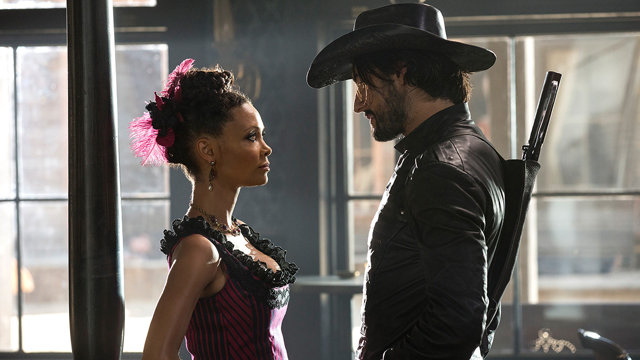 When I first began seeing trailers for the HBO series based on the original movie Westworld it immediately went on my must-check-it-out-list. My mom was obsessed with Yul Brynner (very, very, very obsessed) so I’ve seen Westworld, the movie, a lot. She also has a thing for Michael Crichton (my geekiness is a genetics thing you see). Given my second-hand attachment to the original material and my own wee obsession with Anthony Hopkins, I decided to wait until I had a few episodes to watch before giving it a go.

I’ll admit it, sometimes I just hate waiting for a new episode to air to find out what happens next. Particularly if I’m not sure I’m going to keep watching a new show. A five-episode binge was just about right to get a real feel for the show.

If you don’t like westerns, a major part of the story’s backdrop may not be very interesting to you. But give it a chance. This isn’t just a story set in a western playground with the action happening in the “real” world. From the very beginning, the storytelling has an obvious duality: you meet your first “Host” (android) in the lab but you’re very quickly shuffled into the wild west and immersed in a man’s adventure – which comes to a very poor end and reveals some of the (very messed up) rules of this world. This western world is a character. Story advancement, character development, and the constant world building all happens within, around, and to this storyscape. You can’t ignore what’s happening or skim over the in-game goings-on, you’ll miss out on essential the clues. And the clues are what get you, little changes or holes in the unfolding story that make you stop and say, “what a minute,” like a seemingly throwaway line from The Man in Black that thoroughly – if simply- explains the overt violence and seeming disregard to life, “your humanity is cost effective. So is your suffering…” It puts a very different perspective on what the writers may be up to.

This show moves no faster than it needs to and is extremely fond of cliffhanging all over the place as an episode draws to a close-it is on HBO after all. If you’re an impatient show-watcher, the pace of plot development may well be a deal breaker for you. I do, again, suggest giving the show a chance to grab you. It’s a western adventure with a Dark City-underbelly just waiting for you to discover. It’s a conundrum wrapped in a mystery with a side of what.the.hell. They’re doing more than just simply playing with light and dark to highlight the differences between the in-game resort and the real-world corporation (and people) running everything behind the scenes. It’s digging in to concepts of choice, fate and the nature of sentience itself. 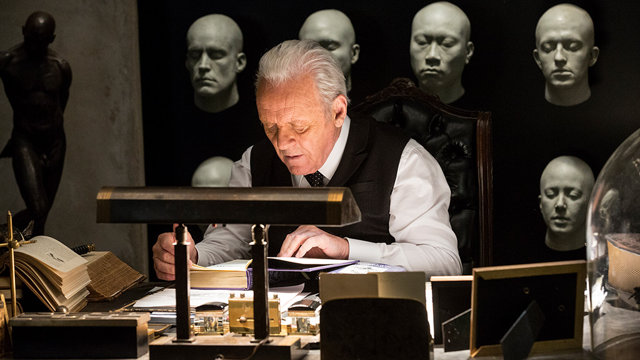 The casting for Westworld is downright stellar. Not one player hits a false note or seems ill-suited to their role. Given that, I was more than a little disappointed with what felt like another show shaping up to underutilize its actors. Dolores Abernathy (Evan Rachel Wood) comes across as the empty cypher to pass on info the audience needs to make the connection between android and their resort overseers. In-game she’s the damsel in distress story trigger. FYI, the opening sequence drives home the fact that Westworld will not be shying away from the typical treatment of unprotected women on the frontier. Which frankly if they had tried to would have been so disingenuous it would’ve destroyed any other point to the show. But I’ll admit, I’m very over the abuse of women just for the sake of the “story.” With Maeve’s (Thandie Newton) introduction as an aggressive hard-talking saloon whore, I was ready to be done. But I started noticing little things about Dolores that made it readily apparent not only wasn’t she going to be a cookie cutter lady character, she was essential to understanding not only what was changing in the resort Westworld but what in heck is going on with-and between-Robert Ford (Anthony Hopkins) and head designer Bernard Love (Jeffery Wright). She’s the bridge from the Westworld of old and its current incarnation as the oldest Host still active. At one point, I actually leaned toward the screen when she answered a question all sweetly and yelled, “this robot chick is lying her a** off!” Her shifts were so subtle, I almost missed them with the violent introduction of The Man in Black (Ed Harris) and alongside the more bombastic performance of Peter Abernathy (Louis Herthum), her father.

You see without giving anything away, Hosts (in-game androids) are meant to be on loops or set paths with moderate ability to improvise to preserve the storyline. Up until now, you’ve gotten hints that all is not right in Wonderland but you’ve been lead to believe it’s just some kind of glitch. Although, you don’t buy it any more than behavior tech Elise’s (Shannon Woodward) ability to hide her skepticism–or her continued investigation. This woman lacks all subtlety. If this were a horror movie, you’d take one look at her and think she’s sooo gonna die next. But if you’ve stuck with the show–seriously give it time to unfold for you–you begun to notice a change spreading, like a virus, through the Hosts. Most notably Dolores and Maeve. Their awakening introduces an entirely different view of the resort as they begin to “remember” and evolve as a result.

I will note here, it’s a wonderful departure from regular storytelling tactics that these women are the overt vehicles of change. It’s not an accident or wishful interpretation on my part. The next two episodes trigger as many questions as they answer. We now know Ford is up to something big in the resort. He’s making the company nervous as hell. We know Ford had a partner (Arnold) in the original creation and research of Westworld-a nod to the movie-who isn’t around and has been wiped from history. But we don’t know what really happened to him in the park. And it seems he didn’t have that much respect for living breathing humans. We know the Hosts are not sticking to pattern and Maeve is on the hunt for answers. Turns out, The Man in Black isn’t just on a random vacation-inspired killing rampage–although homie is real quick to shoot a fool–but is actually looking for a secret within the game world. We also know he’s all the way out of his mind (alright that might just be me, Ed Harris plays this guy a little close to the bone). We know this resort is riddled with Easter Eggs it pays to watch for and that game play among the Visitors leans towards the debauched and scandalous. We know Bernard Lowe is too damn curious for perhaps his, or anyone else’s, own good. Dolores says it best, “I used to think there was a path for everyone; now I think I never asked where that path was taking me…” 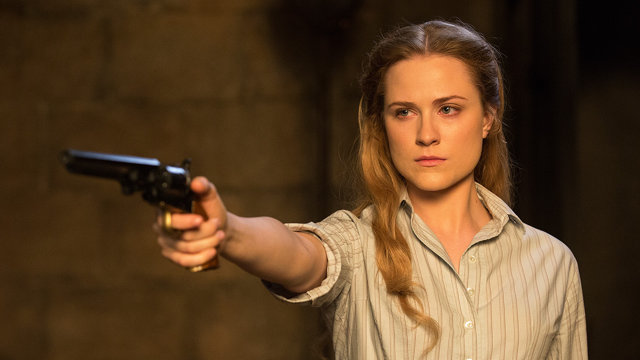 There’s nothing simple about this show or its plot. It’s like a 40 step Chinese puzzle box (based on some of the jacked-up stuff going on, I do not rule out Pinhead as a show consultant). It would be very easy to write it off as just one more show playing up the tropes of the wild west-and exploiting women’s bodies-for no other purpose than to kill a lot of people, stage mayhem, and wallow in gluttonesque madness in an android paradise with no consequences for real humans. But there’s serious method to this madness, especially the repeated resetting (and often redoing) of certain story arcs or conversations.

Just as soon as you unlock one aspect or figure out what’s important in one character arc, the world shifts leaving you facing an entirely new mystery or quirk to unravel. It’s the ultimate locked room mystery. A… maze within a maze if you will. On one level, you’ve got the corporation running the resort and the machinations and shenanigans it’s staff get up to, the problems that need solving, and the need to come up with new in-game adventures, all while jockeying for position and promotions. One level deeper it’s all juxtaposed next to the not so delicate dance happening between departments and the secrets each is intent on keeping from the others. There’s no way I’m the only one thinking head designer Bernard Love’s (Jeffery Wright) got a whole other agenda at play. Very swiftly all this maneuvering bumps into what quickly becomes clear is a battle of wills between the originator of Westworld, Robert Ford (Anthony Hopkins), and a board of directors’. And that’s all before you get to the drama unfolding as the resort game-play goes ever further off script.

Westworld has me involved enough to be in for the rest of the journey. I’ve got too many questions to stop watching now. Not to mention, I really need someone to explain the logic behind keeping (decommissioned because they went batshit) androids stored in the basement…

There’s nothing simple about this show or its plot. It’s like a 40 step Chinese puzzle box (based on some of the jacked-up stuff going on, I do not rule out Pinhead as a show consultant). It would be very easy to write it off as just one more show playing up the tropes of the wild west-and exploiting women’s bodies-for no other purpose than to kill a lot of people, stage mayhem, and wallow in gluttonesque madness in an android paradise with no consequences for real humans. But there’s serious method to this madness, especially the repeated resetting (and often redoing) of certain story arcs or conversations.

Westworld has me involved enough to be in for the rest of the journey. I’ve got too many questions to stop watching now.