Find your flock. The tagline tells you everything you need to know about the theme of this movie. It is about finding family, no matter who they are, whether they are yours biologically, through adoption or friends of the soul. That is the heart of this movie and families watching it will love that message.

This is a sweet movie where our hero, Junior (played by Andy Samberg) and heroine Tulip (played by Katie Crown) come together to help deliver a baby. The storks used to deliver babies but due to an incident in the past, have since moved on to delivering packages, with awesome customer service. “Always Deliver” is their motto. Junior is the best and brightest, has an opportunity to be promoted. The only catch, he has to do something about Tulip, who is incredibly helpful and incredibly destructive. The storks have raised her but she causes too many problems for the boss of Cornerstore.com, Hunter (played by Kelsey Grammar). 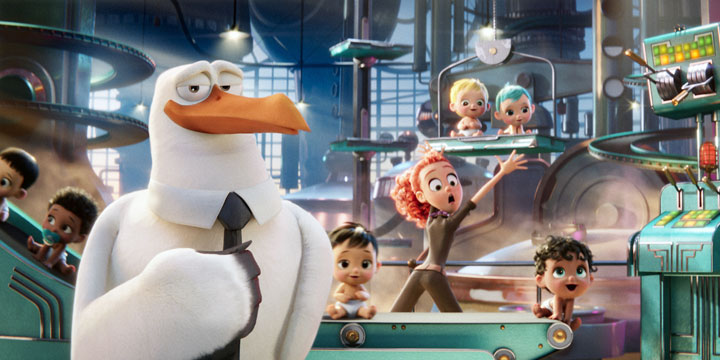 Junior has difficulty managing to get rid of Tulip, probably because he’s really a nice guy and this causes a chain reaction where one last baby is spit out by the baby making machine. Junior is desperate to deliver the baby so he doesn’t get fired and recruits Tulip to help him. There are many obstacles, one of which is a wolf pack of one hundred wolves, run by Alpha and Beta (played by Keegan-Michael Key and Jordan Peele). The wolves manage to keep Junior and Tulip busy with their ability to form themselves into objects, for example, a submarine. Junior and Tulip also encounter Jasper (played by Danny Trejo) who is an important figure from Stork Mountain.

Pigeon Toady played by Stephen Kramer Glickman who works on Stork Mountain, is trying to incur brownie points so he follows Junior and Tulip and discovers the baby delivery. He takes the information to Hunter who puts into motion a plan to stop the pair because Hunter doesn’t want the storks to go back to delivering babies. He wants the company making money and he attempts to stop Junior and Tulip using the company helicopter and penguins during the yearly company convention. 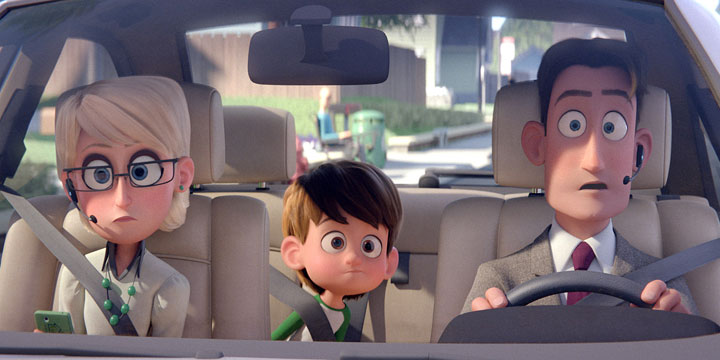 Interwoven with Junior and Tulip is the story of the baby’s family, a mother and father who are too busy for their only child, Nate, played by Anton Starkman. Lonely, he wishes for a brother but his parents say no. Exploring in the attic, he discovers a book about storks delivering babies and writes a letter, ordering up a brother with super ninja skills. This letter causes our baby to be ordered up in the first place. He manages to convince his mother played by Jennifer Aniston and father played by Ty Burrell to spend time with him and by spending time together, all of them end up waiting eagerly for the new arrival.

The baby is an overload of cute with ninja skills as specified by her brother and the wolves stole the show with their creative ability to shape themselves into different objects. The writers have an interesting subplot surrounding Tulip and her family. And the penguins seem to be a subtle joke on the penguins from Madagascar. And at the end of the movie is a beautiful montage to families highlighting all the different types of families you can imagine. It’s a straightforward story with the humor being slightly silly but it is a movie children will like.

If you are looking for a funny movie to take the little ones to, this is warm and appealing for any age child but especially for your youngest ones. Parents won’t get as much out of it but they will like the idea of spending time with their children. It is a bit simpler than some of the other summer movies but the wolves will make you laugh. It is wholesome fun for the whole family.

Masters Lego Short
The chicken made both my husband and I crack up laughing and I think it was a wonderful addition to the main movie. It is inventive and is a bit of a parody of Kung Fu movies. And is as engaging as the original Lego movie compressed into a short film.

In addition to the movie, we received the bonus of two movie trailers. One was for Fantastic Beasts set in the Harry Potter universe without being about any of the Harry Potter characters. The imaginative creatures and engaging characters seen in the trailer make me want to fight to see this movie. The other trailer was for the Batman Lego movie which shows a tongue in cheek version of Batman’s Dark Knight Persona with a broody Batman talking to pictures of his parents and Alfred showing us a montage of ALL the Batman movies and the 60’s series. I was laughing just at the trailer and I am certain the other reviewers at Slice of Scifi will all be vying to see the screening for this movie.

If you are looking for a funny movie to take the little ones to, this is warm and appealing for any age child but especially for your youngest ones. Parents won’t get as much out of it but they will like the idea of spending time with their children. It is a bit simpler than some of the other summer movies but the wolves will make you laugh. It is wholesome fun for the whole family.