You know his name. You know what sort of adventure he’s going to take you on. You know you can’t wait for the ride to start.

We’ve come to expect a certain level of increasing tension through relentless pursuit, high octane action, and fast-paced hand-to-hand combat. We know what’s coming, and we want more, and that’s what the Bourne series delivers, without fail.

“Jason Bourne” is only a little bit different from it’s predecessors. For the first time, you can actually see that Jason isn’t a tireless fighting machine… he’s tired, he’s truly worn out. He won’t stop once he sets his mind on a goal (or a target), but the miles and the battles are starting to show on his face and on his body. 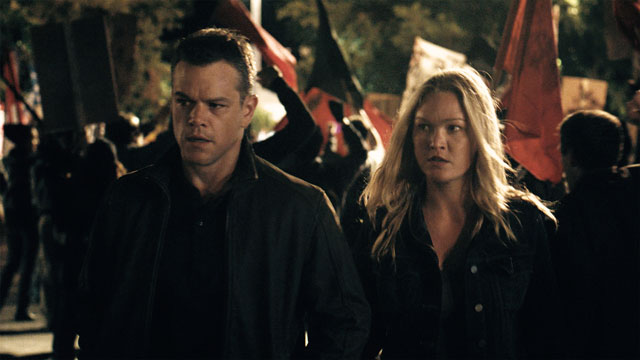 Nicky Parsons has been on the run ever since Jason disappeared the last time, and become part of an international hacking group, using her skills to dig deeper into the Agency’s files to find out more about how Jason started down the path to the weapon he’s become. Because the Agency has tracked her, and is watching when she makes contact with Jason, the panic begins and the hunt is on.

Alicia Vikander plays Heather Lee, an ambitious new generation of analyst-operative who seems more comfortable with data mining and high-tech surveillance techniques than boots-on-the-ground dirty tricks, and her research into Bourne leads to an interesting twist in the hunt: maybe Bourne’s time off the grid has made him a prime target to be re-recruited, brought back into the Agency’s care.

This conflict of agendas between her and her boss, Director Robert Dewey (delightfully played with unabashed duplicity by Tommy Lee Jones), leads to most of the carnage and destruction we see played out during the rest of the film. We don’t find out until much later why Dewey is so eager to kill Bourne, and as with the other men who’d previously sat in his chair, it’s not so much to protect the Agency as just himself. 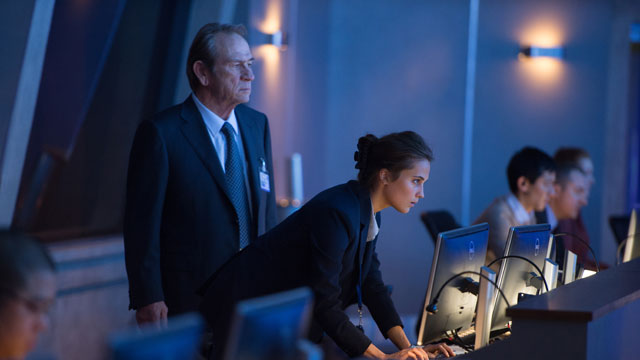 The rest of the movie plays out almost as expected, but the action is still enjoyable even if the story isn’t quite as rich as the previous films. The primary twist, the motivation for half the rest of the movie, is nowhere near as filled out, and if anything, the unknown reasons behind Nicky’s quest left me with even more questions that would have been better served if they’d been addressed or answered.

There aren’t many downsides or disappointments in Jason Bourne, but there are a few (no spoilers here).

First nitpick: the Agency’s assumption that Jason Bourne only resurfaces to try to take them down is curious to me. Bourne didn’t release the Treadstone and Black Briar documents in The Bourne Ultimatum, that was Pamela Lundy’s doing. Jason gave her those documents with no real agenda of his own, and didn’t care what she did with them. Yes, he knew she’d likely use them to try to clean out what was corrupt in the agency but that never had been and never would be his agenda.

In that movie, just as in this one, the tortured Jason is only searching for the missing pieces of his past, with no intention of being a whistleblower… he wants to put together the parts of his life that he lost being an operative and find out if that knowledge can bring him peace, or at least closure. In fact, you could say that those papers Pamela Lundy release inspired Nicky to dig deeper because having been on the inside, she knows how much more there is… she just needs the proof.

So, is it a trope to assume that the most dangerous man you’ve ever trained is out for payback every single time he comes out of the woodwork? Yes, but it serves the story. The funny thing is, Bourne only discovers a reason to take revenge on someone this time as a side effect of what he uncovers from Nicky’s investigations, but again, his revenge is not not aimed at the Agency, just at the few bad apples who personally targeted him for their own agendas.

Second nitpick: I know a lot of people love what Paul Greengrass has done with the movies in this franchise, but I’m also one of his biggest critics about the way he handles some action sequences, especially fight scenes. This movie shines a harsh glaring light on what I’ve always been most critical of — the way he films high intensity fight scenes.

The scenes of Bourne fighting the bare-knuckle underground matches are filmed in a static, angular manner, allowing you to actually see the fight, to watch the fighters develop their strategies and their movements. This is something that Greengrass has never been able to do in any of his Bourne movies with the fight scenes between high-level fighters like the various black ops operatives.

For example, in The Bourne Identity, the fight in the Paris apartment is brutal and beautiful, and you can actually see the nuances in the back and forth between the fighters. People who enjoy fight scenes, or who have experience in competitive combat sports appreciate this respect for the art form. Unfortunately, this subtle observational approach to filming fights is an unfathomable concept for Greengrass, as seen in The Bourne Supremacy, in the fight in the house in Belgium with the former Treadstone operative.

Ask anyone with fight or combat sports experience, any boxer or kickboxer or MMA artist will tell you that house fight is one of the most brutally realistic and lovely fights ever put on film, but it is completely unenjoyable because you can’t see most of it. It’s a mess, all for the sake of some imagined artsy interpretation of a “realistic” approach to filming the fights, and it seems disrepectful to the art of fighting. I would be curious to know how long the stunt people worked to get that house fight right, then ask them if they how they felt that none their hard work could actually be seen and appreciated in the finished film. I would guess they’d be disappointed, but that could just be me.

The fight scenes in subsequent Bourne films became even more frenetic and more frustrating to watch, to the point where I’d almost get angry. That’s why I was nearly giddy when I found out someone different, Tony Gilroy, would be directing The Bourne Legacy.

Last nitpick: The question a lot of us have been asking since The Bourne Supremacy: is there a history between Nicky Parsons and David Webb? We see her briefly in a flash of memory when Jason goes to the training center in downtown New York City. He’s still David Webb at that point, coming in to abandon the life he’s known to become a new kind of operative. Was Nicky assigned to be his handler that early, even before they knew he’d work out? Was she part of his recruitment, and the guilt about what she’d done was driving her farther and farther underground to be able to find the documents and get them to Jason, to in her mind atone for helping the Agency turn Jason into the weapon he didn’t want to be?

I think following that story line would have been far more satisfying than the one that seemed to be shoehorned into this film as the “reason for it all”.

Do these nitpicks detract from the overall enjoyment of the movie? No, not at all. If anything the chances they took with the destructive chase scenes in Las Vegas are to be admired and applauded (and I would love to find out for sure if the production team was able to take advantage of the impending destruction of The Riviera, and destroy a little bit of it for them, since the full demolition of the tower happened only a month or so ago).

For fans of action movies, this is another fun one to put on your must-see list. For fans of the mythology of Jason Bourne, it’s not quite as satisfying, but still a fun ride.

It’s been 10 years since Jason Bourne walked away from the agency that trained him to become a deadly weapon. Hoping to draw him out of the shadows, CIA director Robert Dewey assigns hacker and counterinsurgency expert Heather Lee to find him. Lee suspects that former operative Nicky Parsons is also looking for him. As she begins tracking the duo, Bourne finds himself back in action battling a sinister network that utilizes terror and technology to maintain unchecked power.

We’ve come to expect a certain level of increasing tension through relentless pursuit, high octane action, and fast-paced hand-to-hand combat. We know what’s coming, and we want more, and that’s what the Bourne series delivers, without fail.