I kind of agonized about how to start this review. Then I decided that I might as well just tell you the main thing you need to know first, and go from there. So here it is: The Secret Life of Pets is Toy Story with animals. Period. The setting is different – New York City vs. some unnamed suburban area – and there’s more real world action and violence. But otherwise, it pretty much follows Toy Story beat for beat. But that doesn’t mean it’s not worth seeing.

In The Secret Life of Pets, we get to see what pets do when the humans are away at work and school and such. Max (voiced by Louis C.K.) is happy with his owner, Katie (voiced by Ellie Kemper) and hangs out all day in his high rise apartment waiting for Katie to come home, ignoring the adorable Pomeranian across the street, Gidget (voiced by Jenny Slate), who’s clearly in love with him, and visiting and hanging out with his friends and neighbors Chloe the cat (voiced by Lake Bell), Buddy the Dachshund (voiced by Hannibal Buress), Mel whose breed I’m not sure of (voiced by Bobby Moynihan), a parakeet (IMDB doesn’t list the name and I don’t remember, sorry), a Chihuahua (see prior, ditto), and a lost hamster (see prior, again, sorry).

Into Max’s happy life comes Duke, a giant fluffy pound dog Katie brings home, presumably to keep Max company and because she’s a dog rescuer type (Max was in a “free puppies” box when Katie first finds him, for example). More than once it’s made clear that Duke will be euthanized if he’s back in the pound. Katie is his last and only chance. 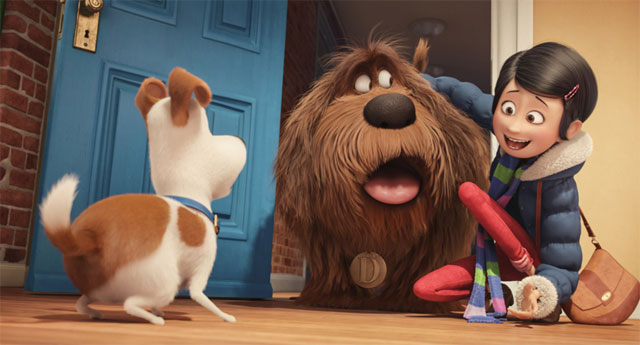 Naturally, Max sees Duke’s presence as an infringement on his lifestyle and he’s a jerk to Duke immediately, which sets them against each other. Katie leaves for work and Max figures out how to blackmail Duke. For about an hour. Then the dog walker comes, and takes all the dogs in Max’s building (but not Gidget, who is across the street, and yes this matters) to the dog park. There, the male slacker dog walker is distracted by a pretty girl dog walker and after Max humiliates Duke in front of the others, Duke figures out how to get rid of Max.

Duke “escapes” from the dog park with Max and takes Max to an area loaded with feral cats and leaves him. But the cats surround both dogs and, because there are a lot more cats than there are dogs, take the dogs’ collars. Duke still takes off, but comes right back, because he’s being pursued by the true villains of any movie about dogs and cats who lose their people in some way – the dog catchers.

Duke and Max are caught and all seems lost, when Snowball the Bunny (voiced by Kevin Hart) and his cronies come to rescue one of their own who’s also in the dog catcher’s van. Snowball is anti-human, and Max and Duke convince him to set them free as well. Snowball takes them down to the sewers, where all the “flushed” animals are. And there are a ton of them down there. All dumped by their formerly loving owners. All bitter and hurt by the betrayal and desertion. All swearing they’ll never go back to being owned, because most of them know that being owned and loved by a human will never happen for them again.

As a warning, there are snakes, rats, and spiders down here as well as an amazing array of other animals of all kinds. Those with fears, snake fear in particular, should be warned ahead of time. It’s not Kaa from The Jungle Book, but there are enough snake scenes to set you on edge. I didn’t note any children being overly terrified by any of this, by the way, but I’m a snake fear girl and I was grabbing my friend’s hand during parts of this movie.

Meanwhile, Gidget – the only animal around actually paying attention – realizes that Max is, essentially, lost. She cutes and cuddles and enforces her way into convincing Tiberius the Hawk (voiced by Albert Brooks, owning the animated market this summer) both not to eat her and into helping her. Tiberius finds one of the feral cats and Gidget makes the cat talk. They find out where Max and Duke are, and go to Pops (voiced by Dana Carey), a Bassett Hound whose back legs are paralyzed but who’s in a dog wheelchair (they exist in real life, but I don’t know what they’re called) for help, and the hunt to rescue Max and Duke is on.

Along the way Max and Duke fight and bond and fight and bond. The other animals get their moments of fun and hilarity and all that as well. The ending should surprise absolutely no one, but that’s not the point of an animated kid’s movie. The points of The Secret Life of Pets are that friendship and your friends matter and so does loyalty, be kind to the new kid, pay attention to that girl who likes you because she’s probably awesome, and humans stop dumping your animals. Especially humans stop dumping your animals.

I loved the music in the movie and the studio paid big bucks for the use of current-ish hits like Taylor Swift’s “Welcome to New York”. However, I think that the music will ultimately date this movie and make it less timeless. Original songs tend to be the way to go, not only to garner Oscar nominations and sell soundtracks, but to ensure that your movie doesn’t feel dated.

Unlike Finding Dory, there isn’t anything I considered to be out of place or out of tone for the movie (lots of snakes notwithstanding). Just as in Toy Story, the pets, both the beloved “owned” pets and the discarded “flushed” pets end up working together to save each other.

My biggest complaint, other than that this is following a formula created by another studio over twenty years ago, is that the filmmakers missed a good opportunity. This is a SPOILER, because it won’t ruin the movie for any adult but may cause small children to ask questions. When we find out that Duke had an (elderly) owner before he entered Max’s life, how he and the owner got separated could have and, in my opinion, should have been done differently. In the version the filmmakers chose, Duke gets lost, ultimately ends up in the pound, and when he finally returns home, a new family is there and the cat that now lives there tells him his owner died.

A far more meaningful way would have been for Duke to have been there when his owner died, and then been sent to the pound (which happens in about 90% of the cases when an owner dies or is incapacitated, by the way – wills need to cover your pets, too, folks). Instead of continuing the theme of “don’t dump animals you heartless humans, they love and depend upon us”, this somehow makes the loss Duke and, in a way, Max’s fault. It’s done to add more “conflict” between the two dogs, but there were plenty of other ways to have worked that in. If the cat hadn’t come right out and said, “Oh, he died,” then it might not have bothered me as much. But if you’re going to talk about death in a kid’s movie, showing it “off screen” is cheap and the far less creative way to go, and it caused me to give a lower rating. Bottom line: they could have and should have copied a bit from Up, too. (end spoiler)

The Secret Life of Pets comes from the same studio that brought you Despicable Me and all of its offshoots. Expect similar animation, tone, and humor. Also and therefore you get a Minions short before the movie. Unlike the amazing Piper that comes prior to Finding Dory, this one was mildly amusing but nothing really at all spectacular. The main funny set piece is indeed funny, but overall it’s merely okay, not something that will make you comment about how glad you are that the studio gave you this extra. If you don’t care about the Minions, as in, if you’re in that vast minority, that’s a great time for the last minute bathroom break or snack bar run.

The Secret Life of Pets is entertaining, fun, funny, and has a rather lovely ending. Sure, it may be derivative, but it’s chosen one of the best animated movies ever made to emulate, and if you’re going to imitate, choosing the best is the way to go.

Max is a spoiled terrier who enjoys a comfortable life in a New York building until his owner adopts Duke, a giant and unruly canine. During their walk outside, they encounter a group of ferocious alley cats and wind up in a truck that’s bound for the pound. Luckily, a rebellious rabbit named Snowball swoops in to save the doggy duo from captivity. In exchange, Snowball demands that Max and Duke join his gang of abandoned pets on a mission against the humans who’ve done them wrong.

The Secret Life of Pets

The Secret Life of Pets is entertaining, fun, funny, and has a rather lovely ending. Sure, it may be derivative, but it’s chosen one of the best animated movies ever made to emulate, and if you’re going to imitate, choosing the best is the way to go.