The hubs is a big Edgar Rice Burroughs fan and he’s a sucker for historical epics. I’m a fan of hot guys with their shirts off and tough guys who’ll do whatever it takes to save their loved ones. So, The Legend of Tarzan, starring Alexander Skarsgard and his excellent abs sounded like it was made for us.

Tarzan has been done what seems like a million times, but rarely is he done right. I very much enjoy George of the Jungle (both the cartoon and the Brendan Fraser live action version) which is a Tarzan spoof, but most actual Tarzan movies don’t do it for me. Even Disney’s version was merely okay. And the less said about the old Tarzan TV show, the better. It was fine for its day, but that day was before I was born and it’s unwatchable today.

As with any movie that sounds like we’ll love it, the hubs and I approached The Legend of Tarzan with hope and trepidation both. The hope was rewarded, the trepidation unnecessary – this is a really well-done movie in all ways. And that rarity of rarities – a movie the hubs and I both liked equally. And, for me, the first time I’ve really seen Tarzan done right, the way he should be portrayed. 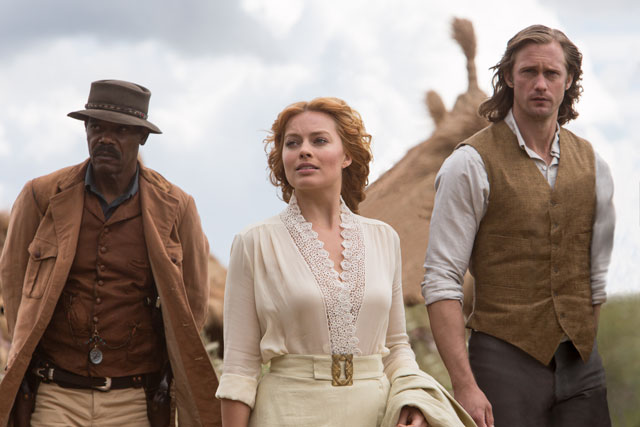 The movie opens with Leon Rom (Christoph Waltz) going into the Belgian Congo to find diamonds. He needs them in order to pay off mercenary soldiers so that King Leopold of Belgium can keep hold of his claimed territory and ravage it. Rom meets Chief Mbonga (Djimon Hounsou) and, after Mbonga’s men have killed all the soldiers with Rom, they strike a deal – Mbonga will give Rom all the diamonds he wants as long as Rom delivers Tarzan (Skarsgard) to him.

Then we’re in England, where the Prime Minister (Jim Broadbent) and what appear to be some of the House of Lords are trying to convince Lord John Clayton (aka Tarzan) that he needs to go into the Congo to see all the great things Leopold is doing, especially since Clayton was invited specifically to do so. Clayton has no desire to go, but George Washington Williams (Samuel L. Jackson), visiting from America, convinces him to go because Williams fears that what Leopold is doing is enslaving all the natives in order to build his railroads, forts, and so on.

Clayton agrees, but doesn’t want his wife, Jane (Margo Robbie) to go with him and Williams. But she grew up in Africa, too, and she wants to go home.

Of course, once they’re in Africa treachery ensues and Jane is taken from Clayton, who only survives this sneak attack because of Williams, who happens to be a crack shot. They go after Jane, and Clayton quickly falls away and is back as Tarzan, because he has to be and, we know, also wants to be. Tarzan learns that Rom is literally doing all Williams feared and more. So now they not only have to save Jane and the others taken, they have to stop Rom from destroying the Congo. 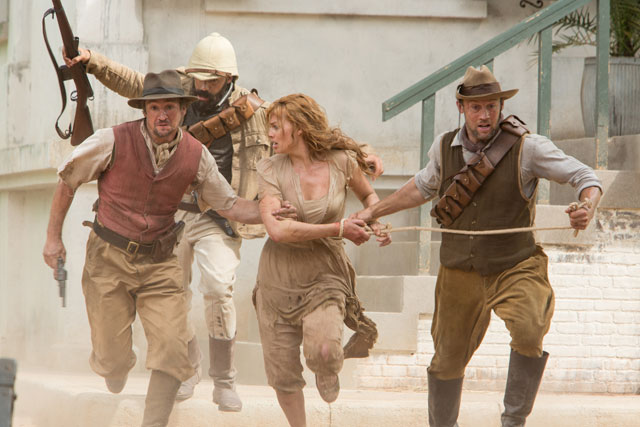 One of the most interesting things about this movie is that pretty much everything in it OTHER than Tarzan is based on actual fact. Leopold’s rape of the Congo, the man who orchestrated such (not named Rom, but that character is clearly based on the real person), George Washington Williams (who deserves his own biopic or miniseries), and more are all taken from actual history.

I personally love when a fictional character is put into actual events in a way that seems utterly believable, and The Legend of Tarzan achieves this. It’s an excellent script, pretty much perfectly executed.

The acting is also excellent, and not just Skarsgard’s abs (though he does spend about half the movie shirtless and it’s glorious). Robbie is wonderfully brave, smart, spunky, and believable as a woman who grew up in Africa and loves it there far more than England. Jackson once again turns in a great performance as does Waltz (I don’t think those two ever turn in bad performances). And Skarsgard is mesmerizing in exactly the way Tarzan is supposed to be. The supporting characters are all good, Hounsou especially. 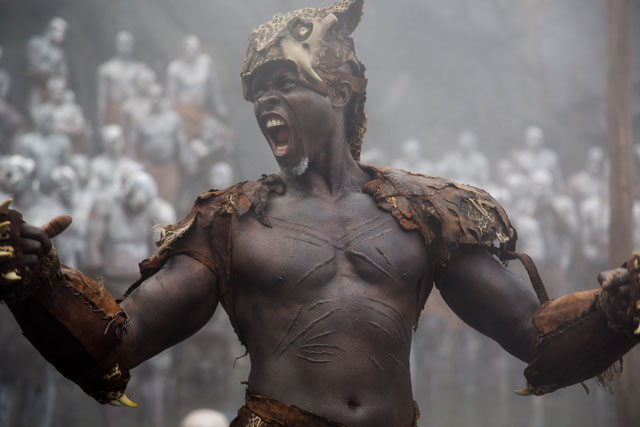 The action scenes are fantastic, the animals feel real, and everything looks great. A note about that. Normally, the critical screening is in 3D if the movie is in 3D. This one wasn’t, we saw a 2D version. I noticed that the CGI seemed “there” kind of around the edges. That’s not a great description, but I noticed it. It wasn’t terribly distracting, but I rarely look at a scene and go, “Oh, that was computer generated,” particularly if I’m engrossed in the movie. But I did that with certain scenes in this movie. On the way home, I mentioned it to the hubs and said this would have been a great movie to see in IMAX 3D and we both wondered if I was noticing the CGI because the movie had been filmed for 3D. Well, sure enough, it’ll be in theaters in IMAX 3D, and that’s the way I recommend you see it.

And I definitely recommend you see it. The Legend of Tarzan has action, romance, danger, intrigue, actual historical fact, amazing stunts and set pieces, and Alexander Skarsgard’s abs. It could be the perfect movie. The hubs and I are going to see it again, this time in IMAX 3D, in order to be sure.

It has been years since the man once known as Tarzan (Alexander Skarsgård) left the jungles of Africa behind for a gentrified life as John Clayton III, Lord Greystoke, with his beloved wife, Jane (Margot Robbie) at his side. Now, he has been invited back to the Congo to serve as a trade emissary of Parliament, unaware that he is a pawn in a deadly convergence of greed and revenge, masterminded by the Belgian, Captain Leon Rom (Christoph Waltz). But those behind the murderous plot have no idea what they are about to unleash.

The Legend of Tarzan

One of the most interesting things about this movie is that pretty much everything in it OTHER than Tarzan is based on actual fact. Leopold’s rape of the Congo, the man who orchestrated such (not named Rom, but that character is clearly based on the real person), George Washington Williams (who deserves his own biopic or miniseries), and more are all taken from actual history.

I personally love when a fictional character is put into actual events in a way that seems utterly believable, and The Legend of Tarzan achieves this. It’s an excellent script, pretty much perfectly executed.