Per those that should know, Finding Nemo is Pixar’s third highest grossing movie to date. Meaning that expectations are high for its 10-years later follow-up, Finding Dory. But is it worth the wait?

We get to see the Dory (Ellen DeGeneres) we didn’t know before – the little baby blue tang with short term memory issues who also has a father and a mother who love her. Dory gets lost from her parents and then, due to her handicap, forgets who she’s lost.

We follow her for a bit, lost and growing up alone, but managing to remember some things that matter, things her parents taught her, until she runs into Marlin (Albert Brooks) who’s looking for his lost son, Nemo (Hayden Rolence), they take off, and then we jump to one year later. One year later for the characters, though it’s ten years later for us, meaning that many who will go to this will have never seen the first movie, because they’re too young or they never chose to catch Finding Nemo for whatever reason.

Note: I liked the way this transition was done, but the friend who came with me didn’t. So your mileage may vary, but if you really feel that you must know all that happened in that “one year”, watch Finding Nemo again before you come to the theater. Otherwise, I felt the filmmakers did a great job in terms of giving us new backstory and showing us how Dory and Marlin met, meaning that we don’t need any other exposition to figure out what’s going on for the rest of the movie.

One year later, Dory has a memory flash and remembers that she had parents who she’s lost. Thus our story really begins, as Dory, assisted by Marlin and Nemo, sets off to find her family. 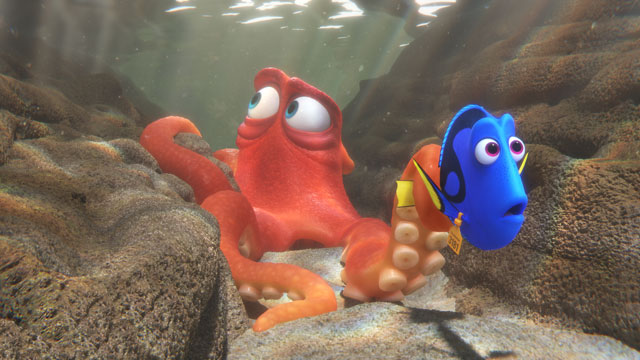 Dory does something typically Dory-like, which causes Marlin to be short with her, which causes Dory to get lost from Marlin and Nemo. So, in addition to Dory trying to find her family, she now has to try to find her friends, who are, in turn, trying to find her.
Along the way to several different kinds of reunions, Dory will meet Hank (Ed O’Neil) the grouchy octopus with hearts of gold, who ends up helping her against his better wishes. Marlin and Nemo meet other sea creatures who help them to get back to Dory. Do perseverance, love, and family, whether blood or chosen, win out in the end? If you have to question the answer, you’ve clearly never seen a Disney/Pixar movie before.

While I love Idris Elba, what he and Dominic West (playing Fluke and Rudder, respectively) were doing voicing California Sea Lions with their natural British accents is beyond me. They’re comic relief, but then, most of the characters are comic relief, Dory included. There are a lot of laughs, and some very emotional moments, as well as a few scary ones, especially for the very young viewers in the audience. (Though nothing as scary as the hospital/wild animal scene in Zootopia.)

There are a couple of scenes that caused my rating to be less than I’d have expected, and they have to do with those sea lions. Fluke and Rudder are really funny and helpful to Marlin and Nemo, and they’re kind and understanding when dealing with Betsy, a sea bird with some kind of disorder – she’s bug-eyed, her feathers are all whacked out, and she’s not clear in the head like the other birds. However, Fluke and Rudder are total bullies to Kevin, another sea lion who appears to be the sea lion equivalent of Betsy – he’s not as good looking as Fluke and Rudder by far, with bucked tooth fangs and buggy eyes, and he’s clearly not all there in the head, either, and that’s proven by how Fluke and Rudder speak to him.

Their bullying is played for laughs and, as long as you wait through the credits, Kevin kind of wins in the end. But only kind of. 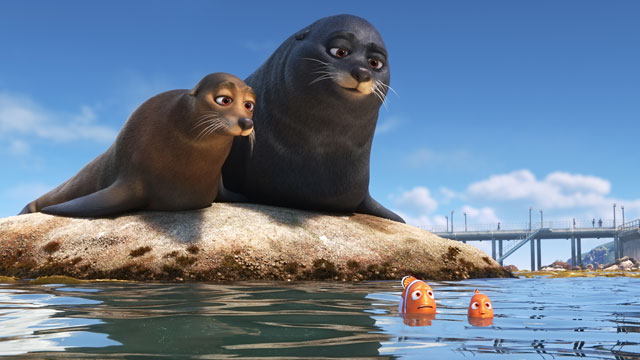 Basically, the presumably unintended message from this is that bullying is okay if you’re funny while you’re doing it. Funny to anyone who’s watching, but Kevin wasn’t laughing. And in a movie that’s got a handicapped lead (Dory’s memory issues are a handicap that she overcomes), with other handicapped characters shown in a good light (in addition to Betsy we have a Beluga whale and whale shark who both have issues to overcome and who are both not bullied by anyone else, all of whom help save the day), to have a character who clearly has issues be the focal point of both bullying and laughs due to that bullying seems completely wrong. It’s a terrible thing to teach children and yes, it’s teaching them that as long as you help “the hero” you can be as mean as you want to be to someone else by claiming it’s “all in good fun”.

The animation is everything you’ve come to expect from Pixar and more. We saw this in 3D and, thankfully, it’s in the good kind of 3D, where it’s immersive versus throwing things at your head. (Having now seen at least four 3D movies in a row like this, all the digits are crossed that this kind of 3D is what we get all the time going forward, because it’s worth wearing the glasses for.)

The short film, Piper, that comes before Finding Dory is exceptional. If it doesn’t win the Oscar for short animated film, there is no justice in the world.

Dory, with her friends Nemo and Marlin on a search for answers about her past. What can she remember? Who are her parents? And where did she learn to speak Whale?

Finding Nemo is Pixar’s third highest grossing movie to date. Meaning that expectations are high for its 10-years later follow-up, Finding Dory. But is it worth the wait?

The short film, Piper, that comes before Finding Dory is exceptional. If it doesn’t win the Oscar for short animated film, there is no justice in the world.