True Confession: I’ve never played World of Warcraft. I don’t think I’ve even watched someone else play it. I’m not anti-video games, but the hubs and I don’t indulge in MMORPG games. Nothing wrong with them, just not our cuppa. Meaning I had pretty much no idea of what actually goes on in a WoW game playing experience.

So, can you follow this movie if you’ve never played the game?

Yes, you can. It’s confusing in places, but the storyline is basically a typical high fantasy arc. The confusing part is in doing that review thing where we tell you the real names of the people starring in the movie. As in, Lothar (Travid Fimmel), Garona (Paula Patton), Medivh (Ben Foster), and King Llane (Dominic Cooper) are about the only characters I feel confident I’ve matched up correctly. And yes, I’ve spent time on IMDB and I’m still not 100% that Clancy Brown is playing the Orc Blackhand, or that Ben Schnetzer is Khadgar, aka the Young Mage. I was clear on the characters’ names while the movie was going on, but the moment said movie was over, the names disappeared in that sense.

But, it doesn’t matter. The Orcs’ world is dying and they need a new place to go. We meet the Noble Orc Clan Leader and his very pregnant wife. He’s part of the shock troops going through the magic gate that the Clearly Evil Orc Wizard (CEOW) has created using the life force of whatever other living beings they can trap. Noble Leader’s Wife isn’t supposed to go, but she comes along anyway because they’re in love and want to be together and it’s an Orc thing for the father to name the baby.

During the crossover from one world to another things go badly for a mother about to give birth, which she does pretty much upon landing. CEOW brings the baby back to life, showing he’s not yet totally evil, and he forgives the mother for being so gung ho and so the Orcs start taking over the new world. 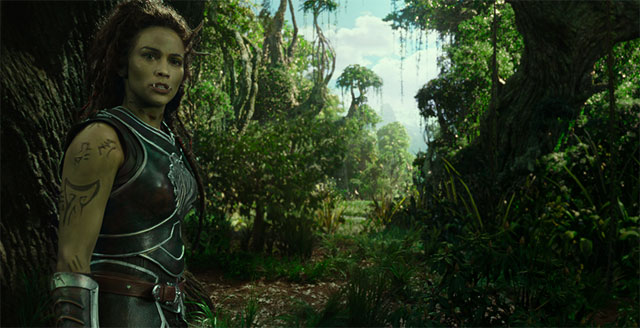 Along for the ride is Garona who is an Orc-Human hybrid and therefore despised by the Orcs. She’s not quite a prisoner but not a full Orc in any way. She’s also very human in her looks and body structure, though not in her teeth and hair.

The humans, elves, dwarves, and such have no idea what’s just arrived on their world, but one Young Mage who has Renounced the Magicians in the Sky (I have no idea what they were called) comes to one of the human cities to check out the people being murdered. Lothar’s men catch him but Lothar is smart enough to realize that the kid might be right – his men died from the evil green magic called the Fell.

Lothar, who is the greatest warrior the humans have, turns out to be the King’s brother-in-law, and though the Noble King asks for help from the other races to try to fight this mysterious race of “giants”, they basically flip him the bird and tell him he’s on his own. Therefore, he has to call on the Guardian, the Mage Medivh, who no one’s seen for six years.

Only because our Young Mage is along do Lothar and a few of his men survive a run-in with some of the Orcs, including the Noble Orc Clan Leader (NOCL). Lothar is able to capture one old Orc and Garona. She can speak human and Orc and when she doesn’t stop talking to Lothar, the Orc she’s captured with tries to kill her. Lothar kills him instead, then the Noble King treats her well, and the Noble Queen shows her kindness and so Garona flips sides.

NOCL sees that the CEOW is clearly evil and tries to save the day by forming an alliance with Lothar and the Noble King. But will it work?

Along the way to the final battle (which is, yes, totally setting up a sequel) alliances are made and broken, characters die, characters are saved, intrigue and betrayals abound, and there’s even a little romance, along with an alien cube from another world that was helpful but was one of those things I sincerely hope is in the game because if it’s not it makes no sense to be in the movie.

Speaking of which, does it all make sense? As much sense as the most recent Star Wars entry and I found this movie far more engaging. (Yes, I said it. I’m rating Warcraft higher than Star Wars: The Force Awakens. I enjoyed it more.) There were actually areas in the movie where what happened was not what I was expecting. These weren’t mind blowing differences, but I still found it kind of refreshing.

We saw this in IMAX 3D and the movie is the good kind of 3D, where it’s immersive, versus throwing things at your head. The CGI was flawless. The Orcs, elves, dwarves, and such all seemed just as real as the humans. The movie looks beautiful where it should and while most of it had to have been filmed against a green screen, you can’t tell. This movie honestly deserves to be up for technical awards at the Oscars.

If you enjoy World of Warcraft or just feel like seeing an entertaining high fantasy movie that dares to view Orcs as being pretty much just like humans in terms of their emotions, actions, and motivations, then Warcraft could be for you.

The peaceful realm of Azeroth stands on the brink of war as its civilization faces a fearsome race of invaders: Orc warriors fleeing their dying home to colonize another. As a portal opens to connect the two worlds, one army faces destruction and the other faces extinction. From opposing sides, two heroes are set on a collision course that will decide the fate of their family, their people and their home.

So begins a spectacular saga of power and sacrifice in which war has many faces, and everyone fights for something.