The monster apocalypse arrives. Humans are an endangered species, outnumbered, outmatched, and under siege. One man fighting for his life in the streets succumbs to the overwhelming situation, and runs into a movie theater for a moment of safety. When he realizes the absurd irony of the monster movie marathon playing on the big screen, he checks out and chooses to watch the show on the screen instead of the one playing out in the streets of the city.

For the most part, anthologies are a mixed bag, but more often than not, you find a few gems amongst an average slate of tales. For me, however, Monsterland falls below that threshold, where almost all of the segments are below average, failing to hit any of the marks for scary, creative, or campy in the least.

The best shorts of the collection are “Stay at Home Dad”, and “Hellyfish”; coincidentally the final two segments of the film. The rest ranged from mildly interesting to completely boring, and save for one additional animated interlude about a monster hunter, they rest ultimately fail to deliver anything memorable or fun. 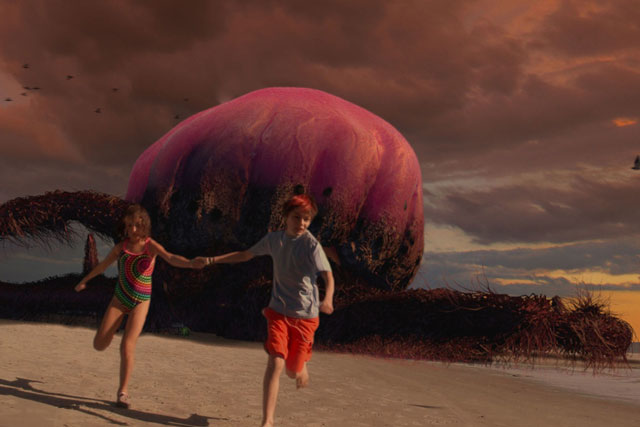 The area with the most potential but seemingly most overlooked is the external story of the survivor, choosing not to deal with the monster apocalypse happening in the streets by taking a break from the chaos and mayhem by watching one last monster movie marathon. I was expecting some sort of synchronicity with the stories on screen and the unfolding situation in the main character’s world, but there was zero attention paid to the external story save for a few moments back in the theater watching our hero eat some more popcorn or take on a creature interfering with the projector. The curious part is that scene may actually tie into the animated interlude previously mentioned, but after seeing this film in its entirety, I have trouble believing that much attention to continuity planning had actually happened. I’ll chalk it up instead to coincidence or me overestimating the pattern-finding abilities of the mind.

Some horror fans might find this amusing and even entertaining, but the lack of cohesiveness between framing story and anthology shorts combined with the overall missteps of leaving out the fun and the camp that good horror can be makes this one a miss in my book.

Amidst a bloody backdrop of chaos and carnage, one panicked, lowly survivor of the Monster Apocalypse takes shelter in a movie theater to buy himself a few extra moments of precious life. Little does he know, he’s taken a flying leap out of the frying pan and smack dab into the fires of hell by attending the last movie marathon he’ll ever see. Welcome to Monsterland! A terrifying place where savage beasts, carnivorous creatures and grotesque abominations are the new normal, and the human race is now at the bottom of the food chain.

The best shorts of the collection are “Stay at Home Dad”, and “Hellyfish”; coincidentally the final two segments of the film. The rest ranged from mildly interesting to completely boring, and save for one additional animated interlude about a monster hunter, they rest ultimately fail to deliver anything memorable or fun.