True Confession: I’m a big fan of the Berlanti Superhero Factory. Greg Berlanti knows how to make superhero shows (Arrow, The Flash, Supergirl) and make them well. Every author has those daydreams about who they’d want to adapt their books. For me and for TV, Greg Berlanti is my dream dude. (Note: He did the movie version of Green Lantern, so he’s fallible.) So I’m predisposed to like Legends of Tomorrow because it’s coming from a production company I have a lot of faith in.

So, is that faith justified?

Legends of Tomorrow takes supporting characters we’ve seen on The Flash and Arrow and drags them (in some cases literally) into their own show. The premise? In the future, the immortal baddie of baddies, Vandal Savage (Casper Crump) has taken over the Earth and is destroying anyone and everyone who he doesn’t like, which is anyone who doesn’t kowtow to him. He kills Rip Hunter’s (Arthur Darvill) family, and that causes Rip, a Time Master*, to break from the Time Council, steal a sentient ship, Gideon (voiced by Amy Pemberton), and go back in time to snag eight sorta superheroes and hopefully have them stop Savage and so become those Legends of the title.

* While this, and the Time Council, and Arthur Darvill’s casting, and all things related to Rip including how he’s dressed, will make many think this is a Doctor Who rip-off, this character has been around in the comics for decades. Rip might be inspired by The Doctor, but if he is, it’s one of the very early ones. Rip and his Council owe just as much to the Council in the Green Lantern comics as they do to Doctor Who. So just roll with it and enjoy the Who Homage, so to speak. 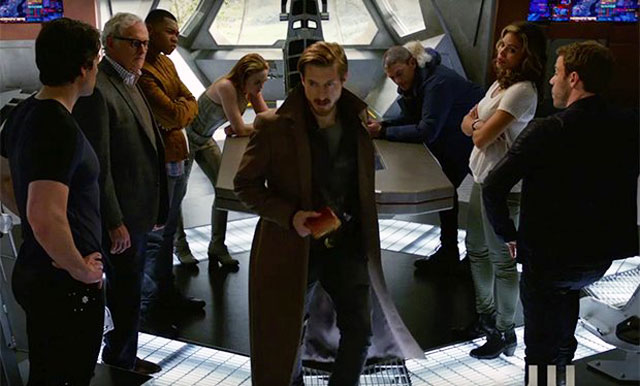 Snart and Rory are a team, Hall and Kendra are kind of a team and kind of a couple, Stein and Jax are a team, and Sara and Palmer have been on Team Arrow at some points in time. So they’re used to working with others, even though most of them don’t actually play well with others, and none of them are used to working with all these others, and not with a captain who has no plan other than “stop the bad guy and don’t destroy the timeline while doing so.” And, naturally, nothing goes according to plan. Because if it did, we wouldn’t have a show.

Technically, Snart is a bad guy, one of the Flash’s villains. But on Legends he’s the guy who holds it all together and makes you actually care about the show, and it’s only because of Miller. Miller oozes charisma, speaking with a slow, sly, sardonic drawl that hides the fact that his character is brilliant. He’s got a great physical presence and he’s definitely the best actor of the group, followed closely by Purcell. It’s not a coinkydink that Berlanti cast Miller as Captain Cold and Purcell as Heat Wave in The Flash to begin with. These guys have been playing well together with mad chemistry since the pilot for Prison Break.

Victor Garber is no slouch in the acting department, either, but he’s given the older, fussy, scientist, sort of father/grandfather role. The rest of the cast run from pleasantly wooden with apparently only two expressions or emotions (Renée, Routh) to reliance on a few standard moves and about three expressions and emotions (Drameh, Lotz, Darvill), even though they’re going for fully fleshed out, three dimensional characterizations. 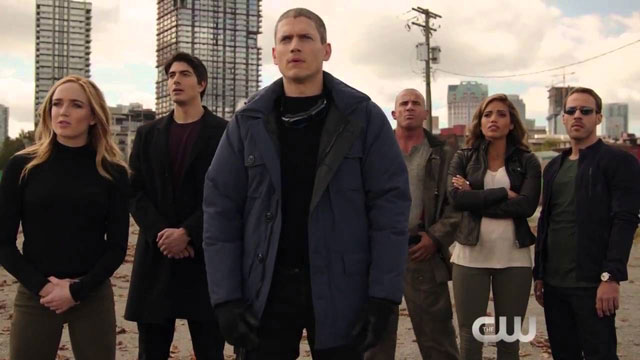 As with every Berlanti show, there are shocking developments that happen fast. Not in every episode, but often enough. There are also a lot of in-jokes that you’ll get if you’ve paid attention to the other shows these characters came from and which shows the actors were on before. (Miller gets in a great line about breaking out of prisons, for example.) And there are cool cameos from existing stars from other shows (like Stephen Amell as Oliver Queen/Green Arrow) and from other superheroes in the DC pantheon.

I’m enjoying this show, as is the hubs, but I can honestly say that if Wentworth Miller wasn’t on it I’d be skipping it. With him, though, Legends of Tomorrow is a fun show that might actually become a good one… in time.

5 Episodes In: "DC's Legends of Tomorrow"

As with every Berlanti show, there are shocking developments that happen fast. Not in every episode, but often enough. And there are cool cameos from existing stars from other shows (like Stephen Amell as Oliver Queen/Green Arrow) and from other superheroes in the DC pantheon.

I’m enjoying this show, as is the hubs, but I can honestly say that if Wentworth Miller wasn’t on it I’d be skipping it. With him, though, Legends of Tomorrow is a fun show that might actually become a good one… in time.