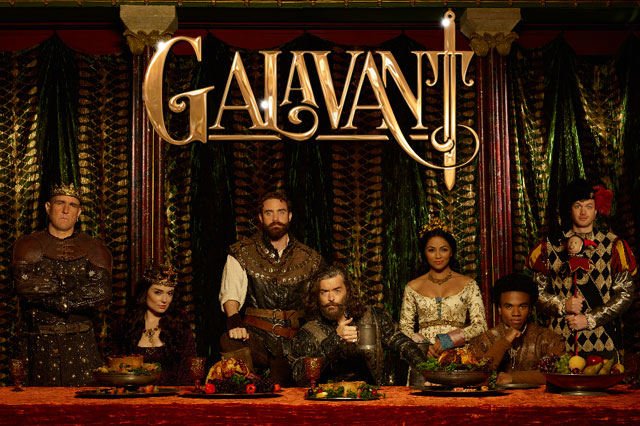 It’s taken a long time, but Alan Menken has finally found a lyricist to replace the amazing Howard Ashman who left us far too early. Don’t think Ashman was a genius? Read the lyrics for the Gaston Song in Beauty and the Beast and get a whole new appreciation of how to move a musical storyline forward while being hilarious at the same time. Glenn Slater has the same puckish way with words, and it’s in full evidence in this series.

Galavant, the singing and dancing medieval comedy, came back for Season Two even stronger. Season One left us with a cliffhanger, and Season Two picks up pretty much where we were left off – our hero, Galavant (Joshua Sasse) is somehow stuck with the man who was his mortal enemy, King Richard (Timothy Omundson), who it turns out isn’t actually all that evil. Meanwhile, Galavant’s Original One True Love, Madalena (Mallory Jansen) is busy being hellaciously evil along with Richards First Best Friend, Gareth (Vinnie Jones), who have taken over Richard’s kingdom, Valencia, which he captured from the rightful rulers. And Galavant’s Second and Real True Love, Isabella (Karen David) is trapped in the kingdom of Hortensia, where she’s due to be forced to wed her eleven-year-old cousin.

Follow all that? Doesn’t matter if you do. The first episode catches you up quickly, and the rest is a fun ride through a variety of spoofs, fun guest stars, a touching bromance, several different romances that all work, and spoofs of possibly every movie from The Princess Bride and Robin Hood: Prince of Thieves to the original Robin Hood, and everything in between.

Season One was criticized by some for its tunes being too repetitive. This didn’t bother me at all, but Menken has heard the critiques and clearly went out of his way to fix that issue in Season Two. The songs are all hummable, but they’re different, and fun is poked at the original main theme throughout.

The cast is all excellent, with great singing skills and comedic timing. Season Two does wrap up, but leaves at least three plot threads open for Season Three, which I sincerely hope happens.

Both Season’s One and Two are available on iTunes if you want to get caught up. They did a free Season One deal right before Season Two came on, so keep your eyes peeled for a similar freebie if/when Season Three is returning.

Galavant Season Two is fun, funny, tuneful, and, at its core, extremely romantic. For me it’s an absolute must see and I have all the digits crossed that we’ll get Season Three sooner as opposed to later.

Galavant Season Two is fun, funny, tuneful, and, at its core, extremely romantic. For me it’s an absolute must see and I have all the digits crossed that we’ll get Season Three sooner as opposed to later.