As you know if you read my review of this series at the start of this year, I loved The Librarians. I enjoyed the entire first season and eagerly anticipated its return. So the question is, was it worth the wait? Is magic, and “the” magic, real?

This season picks up a few months after the first season ended (in show-time). Magic is still loose in the world, and Eve Baird (Rebecca Romijn) and Flynn Carsen (Noah Wyle) have been off on adventures together trying to contain it. Though it’s obvious they still care about each other, their romance is definitely being tested. Meanwhile our not-so-junior-anymore librarians – Jake Stone (Christian Kane), Cassandra Cillian (Lindy Booth), and Ezekiel Jones (John Kim) – worked one job together and then split up to work separately due to “reasons”. 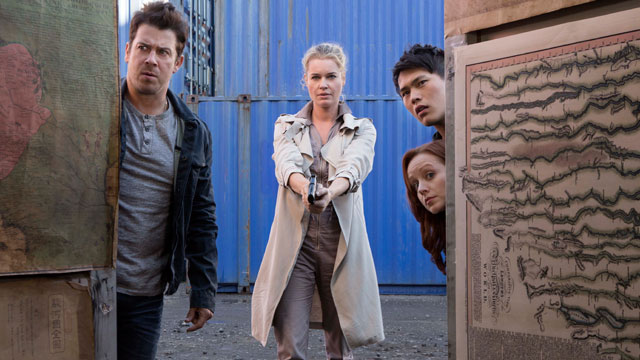 However, a new big bad has pulled himself and several imposing characters out of works of fiction, and the team must join together to try and stop them, helped as always by Jenkins (John Larroquette), who we discovered is far more than he seems last season. Plus they have to save the Library itself, from itself, as well as from external enemies.

To tell any more would be spoiling the fun of the show. But the guest stars are still amazing (John DeLancie! Michael Trucco! Jeff Fahey!), the show is still filled with action, adventure, witty dialog, and campy fun, and the actors are still playing nicely off each other.

The show is also exploring the relationships the characters have with each other and other people. We get to meet Stone’s father, see Baird romanced by both Flynn and one of the bad guys – and the bad guy makes a rather compelling case for himself – and watch Jones become slightly more caring, grown up, and responsible. But only slightly.

Meanwhile Cassandra isn’t dwelling on her illness, though it’s not forgotten, either, and the Librarians are working through their issues together as well as separately, as well as getting to have fun fighting a tentacle monster and a devil, to name only a few. Each show also manages to have a hilarious bit in it that doesn’t go on too long but gives the characters and the viewers a giggle. And the tone remains light, with just enough seriousness to stay on track.

The only negative I have is that the Flynn character is a little too twitchy and a little too present this season. I want to say that Wyle is overacting, but there could be a reason for this that we’ll discover as the season goes on. If not, he needs to tone it down a notch or two when he’s in an episode because he’s practically manic and it’s not endearing so much as it’s grating. This is a small complaint, though, because he’s not in that many episodes. Last season I missed his presence a bit. This season I’m okay with him being off doing Librarian things without the rest of us.

The Librarians remains the fun and frolicsome love child of Indiana Jones and Lara Croft, and I remain in love with it.

5 Episodes In: "The Librarians" Season 2

I enjoyed the entire first season and eagerly anticipated its return. So the question is, was it worth the wait? Is magic, and “the” magic, real?

“The Librarians” remains the fun and frolicsome love child of Indiana Jones and Lara Croft, and I remain in love with it.