From the moment Toy Story hit the screen, moviegoers everywhere turned out in droves to watch Pixar magic on the big screen. As we near the end of 2015, Pixar is releasing one more film and just in time for the holiday rush. So, how does The Good Dinosaur fare? Does it live up to the rich catalog of A grade titles? Like most Pixar films, The Good Dinosaur is filled with emotional moments of life and death scenarios. I believe this is why so many Pixar movie’s connect with people. They’re filled with reality based elements that touch the hearts of everyone. The Good Dinosaur is successful in embracing this formula, and for better or worse deserves to rub elbows with other Pixar movies.

So what makes this movie succeed? For one, the animation is the best i’ve seen from a Pixar movie. The lush vistas and beautiful foliage bring to life it’s prehistoric setting. So impressive! While the backgrounds looked life like, the dinosaur’s reminded me of the cartoonish Land Before Time. I’m not sure some may like this but when placed against the lifelike backgrounds, it really seems to work. 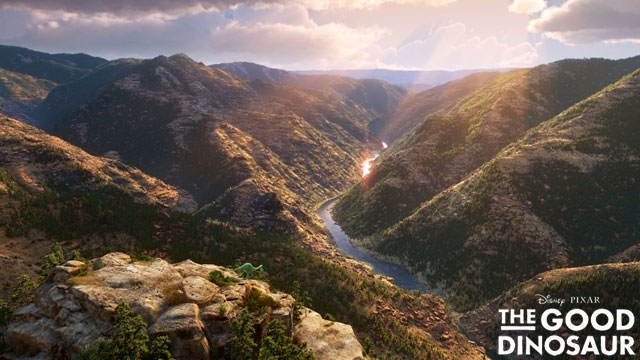 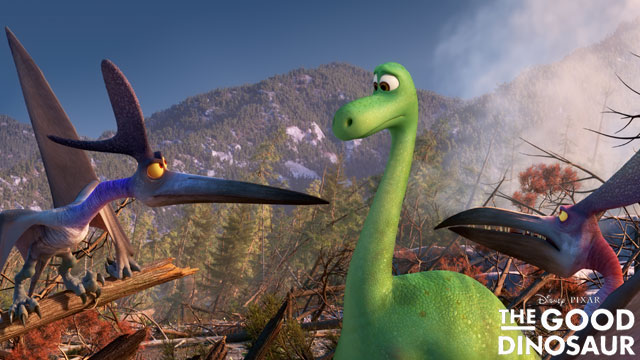 The plot is simple enough. The dinosaurs were never wiped out by an asteroid 65 million years ago. Instead, the asteroid missed Earth and in turn the dinosaurs develop into intelligent species. It’s as if humanity took a back seat to a simple act of circumstance. As with every Pixar movie, The Good Dinosaur has many colorful characters that permeate throughout. The main antagonist is Arlo (voiced by Raymond Ochoa) an under sized Apatosaurus, who like the Ugly Duckling is the weakest and smallest in his family. For the first part of the movie, we see Poppa (voiced by Jeffrey Wright) teaching Arlo to overcome his fears and not let his size be a handicap. This of course sets up the inevitable emotional scene typical in Pixar movies. After finally getting fed up with Arlo and his fragile ways, Pappa forces him to catch a varmint that had been eating their corn. (These dinosaurs are farmers). During this chase, a horrific storm explodes and creates a devastating flood. At the height of the storm, tragedy strikes and we soon see Arlo alone and scared. Quite a sad scene. Losing his dad forces Arlo to survive on his own while trying to remember how to get back home.

Unlike Pixar’s previous release Inside Out, The Good Dinosaur lacks originality. We’ve all see this movie before in many incantations like The Lion King and Bambi. While this may be seen as a negative, The Good Dinosaur succeeds in many other ways. In his struggle to find his home, Arlo runs into an orphan human named Spot. Ironically, Spot is the varmint who was being chased before Poppas death. Naturally, Arlo blames Spot for this and initially despises him. During the journey we see Arlo and Spot develop a friendship that is enjoyable with laugh out loud moments. It’s from this relationship that the movie shines.

From the start of the movie till the end, I really enjoyed this film in spite of the bland story and would recommend it to anyone, especially fans of Pixar films. Just like the title, The Good Dinosaur is in fact pretty good.

Like most Pixar films, The Good Dinosaur is filled with emotional moments of life and death scenarios. I believe this is why so many Pixar movie’s connect with people. They’re filled with reality based elements that touch the hearts of everyone. The Good Dinosaur is successful in embracing this formula, and for better or worse deserves to rub elbows with other Pixar movies.