Sloppy story-telling of any genre bugs me, but mundane or trite or lazy horror stories either bore me or make me angry (Event Horizon, I’m looking at you), and don’t get me started on the lazy, uninspired use of gore and splatter and cheap jump scares that the slasher films of late being pawned off as horror movies the past 10-15 years or so are so fixated on that as a result, no coherent story (or reason to get scared) can be found anywhere in the mess.

So I appreciate a good story that’s a throwback to the classic horror, or a well done wink at horror that’s meant to be funny, but coming across those have been few and far between. Plus, there aren’t many horror anthologies out there for television or film anymore, and as someone who used to enjoy “Tales from the Crypt”, “The Hitchhiker” (both on HBO back in the day), and “Dead Man’s Gun” (on Showtime), whenever a miniseries or short film anthology comes along, I’m more than inclined to check it out.

Tales of Halloween is just such an anthology, one that I’ve been waiting for ever since I heard it was going into production back in 2013. The initial premise I thought was interesting: 10 stories by 10 different directors, all woven into a Halloween night in a single American suburb, and with such a variety of talent and stories, how could such a movie not be entertaining?

This is an entertaining collection, but not exceptionally so. For some reason, most of the scary stories weren’t very scary at all, but the funny ones and the quirky ones all hit the mark. It’s almost as if the ones that worked found that perfect balance that “Tales from the Crypt” used to hit.

For me, the stories that worked the best are “The Night Billy Raised Hell” (Darren Lynn Bousman), “The Weak and the Wicked” (Paul Solet), “Friday the 31st” (Mike Mendez), and “The Ransom of Rusty Rex” (Ryan Schifrin), with an honorable mention going to “This Means War” (John Skipp and Andrew Kasch). The ones that didn’t excite me quite as much seemed to lean more towards the gore effect for impact rather than my preference for something truly eerie, but in the end those were okay stories, too.

All in all, it’s something I’d recommend seeing, because even though some of the stories were weaker than others, the cinematography and the special effects and makeup are top notch all the way through.

Eleven directors, renowned for their contribution to the horror movie genre, have joined forces to create a series of interconnected stories, each with a unique Halloween theme. Ten short films have been woven together by a shared theme of Halloween night in an American suburb, where ghouls, imps, aliens and axe murderers appear for one night only to terrorize unsuspecting residents. 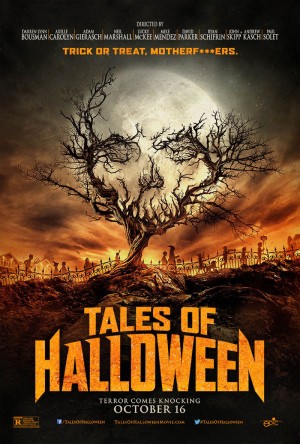 This is an entertaining collection, but not exceptionally so. For some reason, most of the scary stories weren’t very scary at all, but the funny ones and the quirky ones all hit the mark. It’s almost as if the ones that worked found that perfect balance that “Tales from the Crypt” used to hit.