Warning: this review will contain spoilers to anyone who is not already familiar with the original Star Wars: A New Hope. 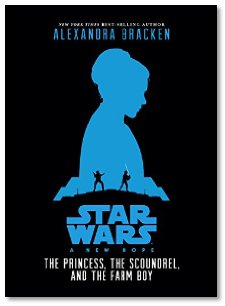 Imagine if someone asked you to retell the story of the original Star Wars for a new Young Adult audience. Now imagine that you can only tell the story from three perspectives, who do you chose?

Luke is obvious, but what about the other two?

By the title it should be obvious that Alexandra Bracken chose Leia, Han, and Luke as her three viewpoint characters. The way she goes about this is cleverly done, starting the story in Leia’s shoes and following her adventure along until shortly after the destruction of Alderaan. From there, the story backtracks to the Mos Eisley Cantina and follows Han through the escape from the Death Star. Luke then picks up the POV duties for this point through the end of the story. The book remains consistent in these viewpoints, but is book ended by a third person omniscient narrator, first retelling the famous opening crawl, and then giving a short epilogue.

Do not consider this book a replacement for the movie, or the original novelization ghost written by Alan Dean Foster. Instead, look at it as a supplement. This book does an excellent job of getting into Leia’s head and really lets the reader/listener (since I am reviewing the audiobook version) know what she felt through this adventure. I almost would have liked the book to tell the whole story through her viewpoint, and those of the others as well.

The Han section is not as strong. While it also gets into the smuggler’s head, it reveals certain insecurities on his part with no backstory to explain why. This would have made an excellent place to give more information about Han’s history, as the author did with Leia. The section is redeemed however by confirming what every Star Wars True Fan knows, HAN SHOT FIRST!

When reading through the Han section, I began to wonder how far back the Luke section would backtrack. Would it go all the way back to buying the droids? How about the rescue of the princess from his POV? I was shocked when it just picked up where the Han section ended. We lost so much of Luke’s early story, getting snippets about buying the droids, R2-D2 running away, the encounter with the sand people, meeting Obi-Wan, the Deaths of his Aunt and Uncle, etc. These are huge character moments for Luke that paint out his path and are filled with a great deal of emotion, and they are all but glossed over. We are treated almost immediately to his loss of Obi-Wan and an extended conversation with Leia about how she is dealing with the loss of her whole world.

The story then continues on much as the movie did, with some extended scenes and conversations, as well as the addition of the X-Wing simulator scene from the Radio Play. This works out great but again does not paint the complete story that is Star Wars: A New Hope. That is why I regard this as a supplementary work, meant to enhance and expand upon characters that otherwise didn’t get as much development as they deserved.

In limiting the POVs however, there is a lot of story that gets lost. In terms of screen run time, at least 30 minutes gets left behind. And of the remaining material there are subtle changes, especially to dialogue, that will drive some fans crazy. Basically any droid or imperial centered scene is gone unless one of our leads is there. Luke’s time on the moisture farm, Ben telling Luke about his father and the lightsaber, gone. Even the escape from the Death Star detention center follows only Han and Chewie, so Luke and Leia’s swing across the chasm is only a brief mention later. Obi-Wan’s adventure on the Death Star is left out almost entirely with the lightsaber duel shown from Han’s perspective as little more than a distraction. This leaves an incomplete story.

Even just adding one more POV, that of Darth Vader, or Obi-Wan, would have given a far more complete story then what was presented here. Or even have Obi-Wan’s POV replace that of Han’s with Luke’s beginning aboard the Death Star. Also keeping in a singular POV for each of the three sections creates perceived timeline issues. There is no reason why the book couldn’t skip back and forth between characters in each chapter to show that this is multiple stories coming together to complete one larger tale.

There is also the matter of the Sith. While the term “Sith” has existed in every draft of the original Star Wars, it is only used as a character descriptor in the final film’s script and supplementary material. The word is never uttered by any character, until now. In the dialogue between Luke and Ben aboard the Millennium Falcon, Obi-Wan refers to the Sith at several points. These changes to the dialogue are at the least jarring. I understand Ms Bracken’s desire to place her own spin on Star Wars, but much of this dialogue is iconic.

I will applaud her however for some little changes she made to try and tie the original movie into the prequels better. This is a snippet of conversation that Han overhears between Obi-Wan and R2-D2 where the old Jedi acknowledges their old adventures together, tying up a loose continuity strand.

Then there is the audiobook itself. For the most part this is excellent, though the use of music from The Phantom Menace just feels out of place, as do certain sound effects.

Overall I give the book itself 4 stars out of 5. Take this as a supplement to the movie that gets you into Leia’s head especially, but be prepared for some subtle changes and loss of story. Basically, read this right after a rewatch of the movie, or right before.

The galaxy is at war.

Although the Rebel Alliance has won a few battles against the Empire, hope is fading. The Empire is about to finish building the greatest weapon the galaxy has ever seen-the Death Star. The rebels’ only chance to defeat it now lies in the unlikely hands of a princess, a scoundrel, and a farm boy. . . .

"Star Wars: A New Hope: The Princess, The Scoundrel, and The Farm Boy" by Alexandra Bracken

Do not consider this book a replacement for the movie, or the original novelization ghost written by Alan Dean Foster. Instead, look at it as a supplement. This book does an excellent job of getting into Leia’s head and really lets the reader/listener (since I am reviewing the audiobook version) know what she felt through this adventure. I almost would have liked the book to tell the whole story through her viewpoint, and those of the others as well.