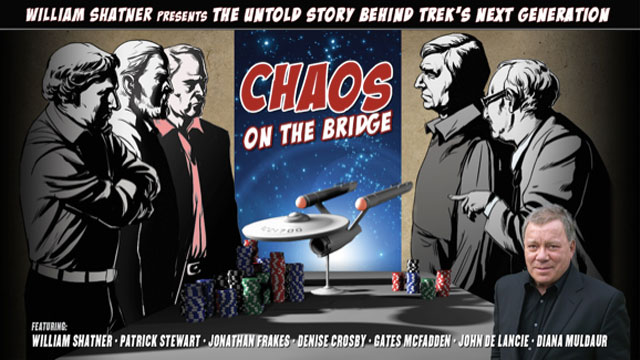 The new documentary William Shatner Presents: Chaos on the Bridge, is set to be released by Vision Films and Content Media on all major Digital Platforms in the USA on Saturday August 1st, and the UK on Monday August 3rd.

In this documentary, writer, Director and acting legend William Shatner takes viewers inside the creation of Star Trek: The Next Generation, the bold attempt in 1986 to recreate the success of the original television series, through the eyes of the writers, producers, actors and executives who were involved.

On Tuesday August 4, 3pm Pacific Time, William Shatner will be on Twitter @WilliamShatner to answer any questions his fans may have about the documentary.

Here’s a clip from the feature, about horseplay on the set of the show:

“Next year marks Star Trek‘s 50th anniversary,” says Lise Romanoff, Managing Director / CEO of Vision Films, Inc. “This insightful documentary is bound to strike a chord with both hardcore “Trekkies” and those who want to witness the ultimate creative forces of the production team behind this iconic sci-fi franchise at work.”

Reviewing "I-Lived"
Larry Nemecek on "Star Trek: Stellar Cartography"
The Creative Drive Behind "Volition"
"Hunter Hunter": When the lines between hunter and prey are blurred