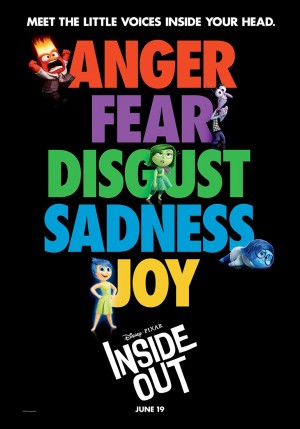 Inside Out follows the story of the emotions – Joy, Sadness, Anger, Fear, and Disgust – inside an eleven-year-old girl named Riley’s brain. She’s basically a happy kid, until her family has to move from Minnesota to San Francisco. And she becomes unhappy first because Sadness keeps on touching her memories and making them sad, and then because Joy and Sadness get sucked out of her conscious mind and sent off into other parts of her memory banks. While Riley struggles with pretty much everything and becomes a completely different kid, Joy and Sadness work frantically to get back to her with her core memories so that they can restore her to the person she once was, facing myriad dangers along the way.

First, the good things. The animation is, as always for a Pixar film, excellent. We saw this in 3D, which I normally despise, but as with Despicable Me 2, the 3D is used to enhance the feeling that you, the viewer, are in the film, versus just making things fly “at” you.

The voice acting is very good – unless you go in knowing for sure who is playing what character, the voices are so apropos to the characters that you don’t really register that, for example, Joy is Amy Pohler, which I think is the entire point of voice acting. The actors’ voices become the characters, the characters aren’t forced to be the actors.
This is the first nuclear family any Disney movie has had since The Incredibles. And a Disney family with two parents and however many children where the parents have a good relationship and neither one of them dies or even comes close to dying is a rarity to be treasured.

There are some truly hilarious bits, particularly when we get to see into other people’s heads, like the mother and father, and see how their emotions are running things.

Now, for the not-as-good things. The movie is very entertaining, but it’s far more entertaining for adults than children. Riley is eleven, and I wouldn’t recommend this movie for kids under eight, due to a variety of fairly heavy and depressing things that happen. Yes, there’s a happy ending, but things get slow and sad more than once. That’s not a bad thing in and of itself – more movies could probably use this – but considering that this seems aimed at little ones, the issues being dealt with (losing your emotions, losing your memories, running away from home) seem far more PG than G. This movie felt heavy and dark in many places in a very different way from, say, Snow White, in part because it’s set in present day with characters that feel like they’re someone you could meet at the mall.

My biggest issue is with the choice of the emotions. Where is Love? Where is Hope? Those two are incredibly human emotions, and without them, we aren’t full people. Joy is not the same thing as love or hope, or even happiness. And why do we have Disgust as an emotion? Wouldn’t Envy be a more realistic emotion to choose? What about Courage? I understand that it’s a kid’s film and a million characters onscreen becomes hard to follow no matter who your audience is, but I still question the choice of Joy as the main emotional character and I question the choice of Disgust at all. Shouldn’t children actually be taught that love and hope and courage are good things? Joy is, frankly, fleeting. Love is not. The film’s message – that joy and sadness go together – is fine, but it’s actually love that rescues Riley, even though the film doesn’t acknowledge that that emotion even exists.

There is a death scene, and though it’s handled well, it could definitely upset some kids, so parents should be forewarned that they may have to explain that forgotten doesn’t necessarily mean gone forever. This was also the point in the movie where my friend noticed that all the kids around us seemed incredibly restless.

When describing the film to the hubs, he pointed out that this sounds like a review of an animated movie about mental illness, since Riley literally loses the ability to feel and also loses her core memories and becomes a completely different person. She can’t remember how to play hockey, something she’s been doing since she could walk. She can’t feel anything at certain points of the movie. She is, quite frankly, broken, and it’s her own mind that’s broken her.

The movie definitely has an interesting take on memory and how the mind and emotions work together, along with what someone who can’t feel anything might be like. There’s a lot of what will sound like solid science to young kids in this, though, and since we have many people, children included, who will or do suffer from forms of mental illness, the movie’s easy fix – get Joy and Sadness back where they belong and all’s well – won’t necessarily give someone really suffering from mental issues any actual help or inspiration.

There is a short feature, Lava, that both appears to be a fairy tale for how Hawaii was formed and also has some heavy stuff happening before its happy ending. Beautiful animation, voice, and singing work, definitely dark and sad right before the end.

Basically this double feature is the Dark and Heavy Middle family movie option.
There are scenes in the ending credits, but once they stop, there’s nothing else coming other than the credits themselves, so stick around for what there is, because they’re pretty funny.

So, what did the two Disneyphiles ultimately think of Inside Out? That its positives make it entertaining but its negatives ensure that it’s not among the great ones. Sadly, Inside Out is not the next The Incredibles or Big Hero 6. It could have been, but it let the wrong emotions be in charge.

The movie is very entertaining, but it’s far more entertaining for adults than children. Riley is eleven, and I wouldn’t recommend this movie for kids under eight, due to a variety of fairly heavy and depressing things that happen. Yes, there’s a happy ending, but things get slow and sad more than once.