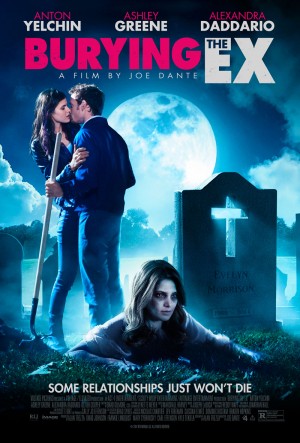 This week, June 10-14, The American Cinematheque will be hosting a retrospective of Joe Dante’s work at the Egyptian Theatre in Hollywood, including a special advanced screening of his newest horror-comedy, Burying the Ex.

Few directors have managed to juggle the funny and the frightening with as much dexterity as Dante, a lifelong film fan well-versed in genre conventions and willing to strategically upend them, and during this week’s retrospective series, Dante will be there in person to introduce each feature in addition to the Q&A for Burying the Ex.

The week’s screenings are:

Fri Jun 12: The ‘Burbs and Matinee

Burying the Ex Synopsis: Max (Anton Yelchin) knows things aren’t working out with Evelyn (Ashley Greene), but he dreads breaking up with such a Type-A personality. That problem is apparently solved when Evelyn is hit by a bus, though after Max finds a more compatible girlfriend (Alexandra Daddario), his ex returns as a zombie, determined to hold him to his pledges of eternal love.

Burying the Ex opens in theaters and will be available on VOD & iTunes on June 19.