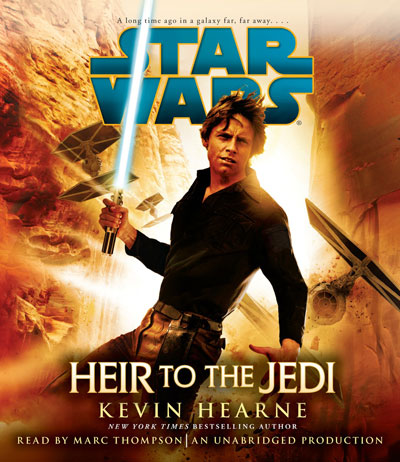 As a boy I grew up on Star Wars, devouring all things Star Wars I could find, and that included the books. I even read all of the novelizations, and as they arrived on scene the Expanded Universe books. Though, I admit, that I stopped reading early in the New Jedi Order series of EU books. Therefore this was my first foray back into Star Wars literature in many years, and I was not disappointed.

Told from a first person perspective, Heir to the Jedi follows Luke Skywalker on a series of missions to secure weapons, allies, and a key intelligence operative while making a personal journey of discovery where he begins to develop his Jedi abilities without a teacher.

The first thing to strike me about this book is that is written in the first person. The last Star Wars book I recall written in that fashion was Michael Stackpole’s I Jedi, an excellent book. This was handled very well, and keeping it in the limited POV made it a far more personal story for Luke. This did however make it feel less Star Wars like as we never got into the head of any major antagonist or any of the other Star Wars characters we all know and love.

As I progressed through the book I found myself enjoying it, not so much as a Star Wars book, but as a general Science Fiction Space Opera. I have long said that the best Star Wars books are the ones that don’t feel written as Star Wars Books. This one accomplished that, it felt like it could have been at home in its own universe or a myriad others just by changing the characters and some key scenes.

That same factor made me like the book also worked against it at points. Luke does not use his Force powers in an active way much throughout the book. Given where it takes place, shortly after the Battle of Yavin, this is to be expected. He has had little teaching in the ways of the Force and actively tries not to make the wrong decisions about how to progress. The scenes where he does actively use the Force are excellent however and really show that Luke has little, if any idea, of what he is doing. His failed attempt at bending someone else’s will comes across great, as do his first forays into Force telekinesis. When Luke does make active use of the Force it is always remarked upon by his companions, as does his passive use of the Force, though the narrative does not touch on these much. I expected Luke to use his lightsaber much more than he did in the book and was somewhat disappointed that he did not employ it more, but again, given where he is with his training that is understandable.

This book also is one of the first I can remember that showed the true temptation of the Dark Side. I won’t go into details but when the Dark Side seduces Luke, you, as the reader, can understand feel its pull right alongside Luke.

The story seems to meander at first, with Luke heading off on a trade mission where he is momentarily sidetracked and rescues a smuggler ship under attack by the empire. This gets the ship he is on marked by the empire, forcing him to repaint it and get a new transponder. On the trade mission he is led to the grave of a fallen Jedi, where he is given the Jedi’s lightsaber and after dissecting it learns just how far he needs to go to become a Jedi himself.

Luke’s adventures continue from there, where in an effort to get funds for his primary mission he has to go on an exobiology expedition for a rich pharmaceutical baron. He undertakes the mission with the baron’s beautiful and capable daughter. This part of the book had a decidedly un-Star Wars twist, and I never thought I would read the phrase “brain sucking alien” in a Star Wars book. If this is the direction that all new Star Wars books and movies are taking, then I am all in.

I also quite appreciated that Kevin Hearne tried to inject some real science in the book. When Luke enters one star system we actually see him reflect on how long light takes to traverse great distance, in this case light minutes, and how that will delay other ships trying to detect him. I also liked that the book emphasized that Luke is not well educated in the scholarly arts as well. He struggles to memorize a complicated math formula he must use as a greeting, but when another is given in return his narration of it is priceless and he doesn’t even attempt to repeat it to the reader/listener. If I had the text version of the book I would have checked the math on his greeting, but hey, I’m an engineer.

I reviewed the audiobook version of this novel, and it being a Star Wars product, it was filled with sound effects and music from the movies. The musical cues were well placed and fit the scenes. The sound effects however had a bad habit of either giving away things to come, or changing the intensity of a scene. This was especially true in some of the firefights.

The narration of the book was great, and the reader does a good job of sounding like a young Luke, whiney voice an all where appropriate. As an old school Star Wars fan though I would have loved to have heard Mark Hamill in the role, but he might have sounded too old. I did not like some of the other character voices though, especially that of his love interest in the book. The voice just felt too forced to me, given that this was released by a major house I would have expected a voice actress for such a prominent role.

I would highly recommend this book to any Star Wars fan, but if you have strayed from the Star Wars world for a while then I recommend having at least one of the alien species source books close at hand. While Kevin Hearne does a good job of describing some of the aliens, if you are not familiar with them, or what they look like, you might want to have a visual reference.

"Heir to the Jedi: Star Wars" by Kevin Hearne

I would highly recommend this book to any Star Wars fan, but if you have strayed from the Star Wars world for a while then I recommend having at least one of the alien species source books close at hand. While Kevin Hearne does a good job of describing some of the aliens, you might want to have a visual reference.