Four different visions of the future are on deck for March at the FilmBar Phoenix, so now’s your chance to welcome in spring with seeing these scifi classics on the big screen again:

Blade Runner (March 6-8): In a signature role as 21st-century detective Rick Deckard, Harrison Ford brings his masculine-yet-vulnerable presence to this stylish noir thriller. In a future of high-tech possibility soured by urban and social decay, Deckard hunts for fugitive, murderous replicants – and is drawn to a mystery woman whose secrets may undermine his soul.

The Terminator (March 13-16): In the year 2029, the ruling super-computer, Skynet, sends an indestructible cyborg (Arnold Schwarzenegger) back in time to 1984 to kill Sarah Connor (Linda Hamilton) before she can fulfill her destiny and save mankind.

Back to the Future (March 20-23): When teenager Marty McFly (Michael J. Fox) is blasted to 1955 in the DeLorean time machine created by the eccentric Doc Brown (Christopher Lloyd), he finds himself mixed up in a time-shattering chain reaction that could vaporize his future – and leave him trapped in the past. Powered by innovative special effects, unforgettable songs and non-stop action, Back to the Future is an unrivaled adventure that stands the test of time!

2001: A Space Odyssey (March 27-30): Humanity finds a mysterious, obviously artificial, object buried beneath the Lunar surface and, with the intelligent computer H.A.L. 9000, sets off on a quest. With spectacular, painstakingly authentic special effects that have stood the test of time, Kubrick’s film is nothing less than a cinematic milestone–puzzling, provocative, and perfect. 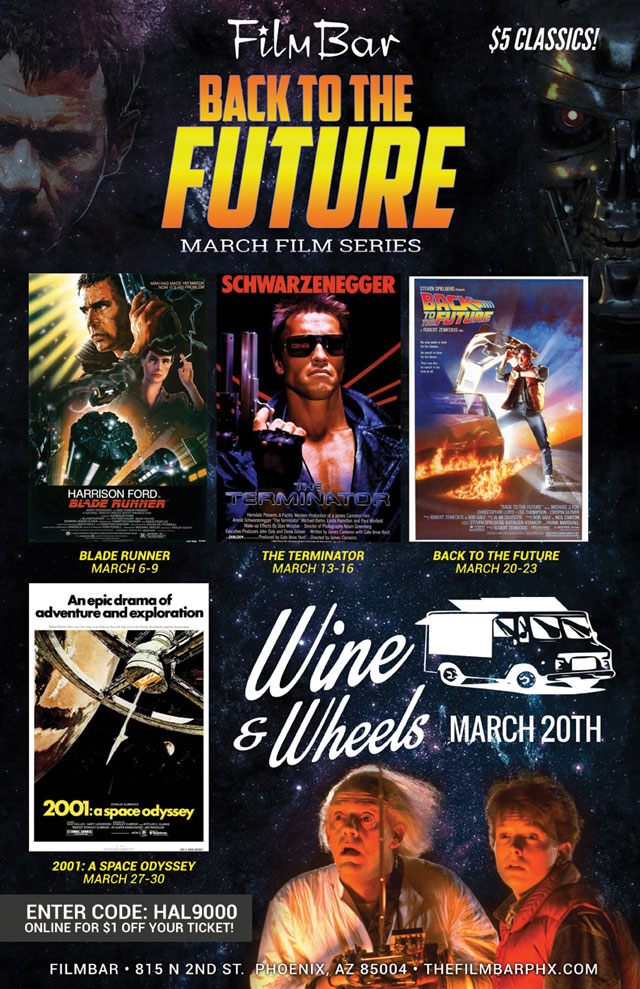