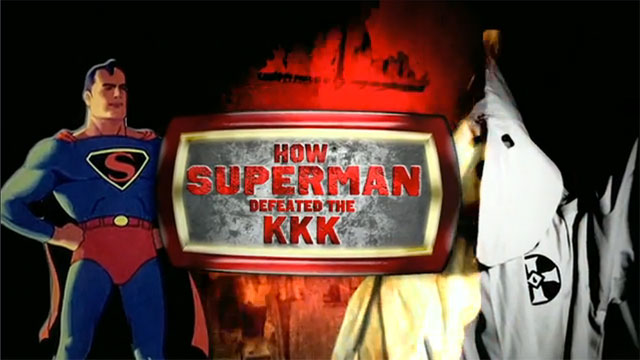 Stetson Kennedy believed there was a problem, a growing problem that was plaguing the United States and its culture, and he needed Superman’s help to fight it.

Kennedy was a writer and a human rights activist. He had concerns about how the Ku Klux Klan had influence in law and government, and that influence was spreading northward. He moved to the seat of the Klan’s powerbase, Atlanta, Georgia, and infiltrated the Klan and learned its policies and ceremonies. He realized that the Klan was already too big for any one man to battle using conventional means. In 1915, the Klan had successfully used the medium of film as a recruiting tool with the “Birth of a Nation,” and the general public turned a blind eye to the stories of Klan violence and murder. Now, they were capitalizing on post-war anti-communist hysteria and their influence was spreading.

Having failed to bring the Klan to justice by reporting his findings to the F.B.I. and Georgia state government, Kennedy decided to try to swing the hearts and minds of children, rather than try to convince adults who might already be set in their ways.

The Adventures of Superman soared into action on the radio on February 12, 1940. The popular radio program documented Superman’s adventures throughout the decade. It was the first time anyone would hear those now famous words, “Faster than a speeding bullet, more powerful than a locomotive…” It was also the first appearance in any medium of Kyptonite. In his adventures, he battled American criminals, corrupt politicians and businessmen, German Nazis, and, thanks to the help of Stetson Kennedy… the Ku Klux Klan.

With the end of World War II, the producers of the show were looking for new villains for Superman to fight. Kennedy presented them with an idea for a series of episodes in which Superman would battle the Klan. In it, Superman defends a young Chinese-American boy and his family from Klan persecution and violence. Clark Kent even draws the obvious parallel by directly comparing the Klan to Mussolini’s National Fascist Party and Hitler’s Nazi Party. The show removed a lot of the mystique that had been surrounding the Klan at the time by including actual Klan code words and ceremonies shared with them by Kennedy.

With its prominent message of social tolerance and justice, “Clan of the Fiery Cross” aired from June to July of 1946, and was a national sensation. It’s success was attributed with a negative impact on the perceptions of the Klan, and sharp decline in Klan membership afterwards. But the secrets it revealed also provoked outrage in the Klan, and their hunt to find the traitor could cost Kennedy his life.

The American History Channel special illuminates a point in history in Superman’s history that many fans are either not aware of or have just forgotten. Superman had been used as a propaganda tool during World War II. But this was different. This was a pivotal moment in which Superman was used to bring about societal change and expose a political organization rooted in prejudice and violence. Like a scene right out of a comic book, and with the help of Stetson Kennedy, Superman defeated an organization of hate.

How Superman Defeated the KKK debuted on American Heroes Channel on Monday, January 19th. Check your local guide for time and listings.

You can also catch up on or reminisce with The Adventures of Superman radio plays, currently being broadcast on Krypton Radio.

Michael J is the editor of ItsComicBookDay.com, where you can read more of his reviews and commentary.