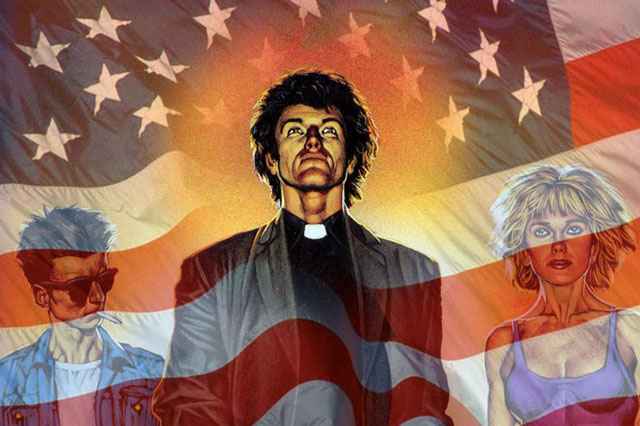 Garth Ennis and Steve Dillon, writer and artist respectively, created an epic tale of justice, romance, and brutal violence. It is an Irishman’s love-letter to the American Dream steeped in myth, soaked in blood, and fermented in sacrilege.

Preacher tells the story of Jesse Custer, the reverend of a very small church in a very, very small town. Like most human adults, Jesse has a past. Granted, his past is a little more violent and disturbing than most. One day while giving a sermon to the entirety of his town, a bolt from above strikes the church killing everyone in sight with the exception of Jesse. And angel arrives shortly after and explains that Jesse now has the power of “the Word of God” embedded in his brain, and the angel has come to collect it. This power compels anyone who hears his commands to carry them out immediately and without the power to resist. Furthermore, the power has left heaven because God has abandoned His post and is now in hiding somewhere on earth.

Jesse sends the angel back home and embarks on a quest to bring God to justice, to hold Him accountable for abandoning His creations. Strictly speaking, none of this is Jesse’s fault or responsibility. But like a sheriff in an old-fashioned western, Jesse feels compelled to set things right, and is willing to sacrifice everything he holds dear to that ends.

First and foremost is the love of Jesse’s life, Tulip O’Hare. They had first met after Jesse had escaped his tyrannical grandmother. Tulip had spent the time since then thinking that Jesse had abandoned her when his family had unexpectedly showed up to claim him…like I said, a little more violent and disturbing than most. Tulip has just quit her job on the first day. She was trying her hand at being an assassin and discovered that she just wasn’t very good at it. But this career choice is a little more difficult to abandon than most, so finds herself on the run from her previous employers. In a supreme act of blind, stupid luck, Jesse and Tulip cross paths again on this very eventful day in Jesse’s life. And once she sees him, Tulip is not letting him out of her sight until she gets answers to why he disappeared all those years ago.

Tulip and Jesse are joined by Cassiday, a hard-drinking Irish immigrant whose tendency towards addiction drags everyone around him down. Cassiday is a vampire, both figuratively and literally. He has walked the earth for more than a hundred years and still hasn’t figured out how to live in it. But while he can be a terrible burden, he is also Jesse’s friend.

Along the way Jesse crosses paths with Herr Starr, the enforcer for an organization known as “the Grail.” Disfigured by bullies when he was a small child, he dedicated his life to establishing order in the world. Ambitious and cruel, Starr suffers more disfigurements, both physical and mental, throughout the course of the series in his single-minded obsession with Jesse Custer.

Desperate to salvage the situation in Heaven, the angels summon “the Saint of Killers” to kill Jesse and retrieve “the Word.” Unfortunately, the Saint is an unstoppable killing machine that murders everything in his path. His ruthlessness and lethality makes the Terminator look like Bambi. His relentless pursuit keeps Jesse focused on his quest as the only way to stop the Saint is to take away his target. The Saint is the ultimate countdown, giving Jesse’s task a sense of urgency as he needs to find God before the Saint tracks him down and kills him. We all face this same beast as we need to complete our respective missions, to leave this world better than how we find it, before death tracks us down.

If Jesse could see what America is today, he would drive the point of his steel-toed boot up our collective butts. We have become a nation of compromise, willing to accept the loss of our personal freedoms in order to feel a bit safer, while those we trust to keep us safe shoot our children in the streets. These days most Americans seem to have forgotten what America is supposed to represent. Funny then that a book written by an Irishman serves as such a heartfelt representation of American courage, American values, American dreams.

Michael J is the editor of ItsComicBookDay.com, where you can read more of his reviews and commentary.