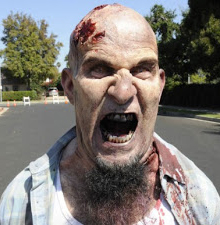 Cliff Curtis (Live Free or Die Hard, Gang Related) now has his leading lady for the prequel to AMC’s highly praised and rating’s buster “The Walking Dead.” Actress Kim Dickens, best known for her roles in “Deadwood,” “Sons of Anarchy (SOA)” and the much touted Ben Affleck film “Gone Girl” will star opposite Curtis as both a work companion and future love interest.

This, as yet untitled prequel, takes place shortly before the outbreak that caused normal people to turn into flesh-eating zombies and explores the origins of whatever it was, who is behind, and why the zombie apocalypse was allowed to spread unhindered.

Co-writer Dave Erickson sought out Dickens for the role after working with her on SOA. Dickens’ character is married with two children and works with Curtis’ character at a local school. They become entangled after the strange disappearance of her husband. She is left with one child battling drug addiction (Frank Dillane) and another (Alycia Debnam Carey) on the fast-track to great collegian accomplishments. The Curtis character, named Sean Cabrera, also has a son from his first marriage (yet to be cast). The entanglements of all these interrelationships become the backdrop behind the search for understanding the zombie outbreak.

The prequel is currently in its early stages of development with several other peripheral but important roles yet to be cast. However, with the choice of the two leads of Curtis and Dickens head writers and show-runners Robert Kirkman and Dave Erickson are now free to set the pilot in full forward gear. Indie film and TV director Adam Davidson (Hell On Wheels) has been given the nod to helm the first episode.