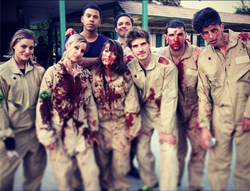 Think you can survive a zombie apocalypse? The forthcoming horror series “FIGHT OF THE LIVING DEAD” will put eight contestants to the test.

From Alpine Labs, BlackBoxTV, and Revolver Picture Company, the unprecedented mash-up of reality and scripted genres, “Fight of the Living Dead” follows a collection of online reality celebrities including Joey Graceffa (The Amazing Race), Jesse and Jeana (PrankvsPrank), Justine Ezarik (iJustine), and more as they work to survive the first 24-hours of a simulated zombie apocalypse. Contestants will face a series of grisly challenges in an attempt to eliminate the competition through the undead’s frightening realistic onslaught.

The original series will debut on Cinedigm and Wizard World’s forthcoming digital channel CONtv, due to launch in early 2015.

Shot over the course of two days at Sybil Brand Women’s Prison in Los Angeles, “Fight of the Living Dead” competitors were first blindfolded, driven in circles, led onto the set, and zipped into body bags, all to help simulate the all-too-real tension of awaking in a post-apocalyptic landscape riddled by monsters out for blood. Instructed by a faceless character named Dr. Altagracia (portrayed by Tony E. Valenzuela, Executive Producer and founder of YouTube’s #1 ranked genre channel BlackBoxTV), the “survivors” are tasked finding the antidote that can save mankind.

Enlisting over 200 extras, FX Supervisor Tommy Pietch (Face Off) and his team create a horrifying mob of rotting, wounded, bloody zombies tasked with keeping the competitors from accomplishing their mission.  “Fight of the Living Dead” also turns up the thrills by including a collection of zombie-clad Parkour experts, overseen by renowned stunt coordinator Chris Carnel (Captain America: The Winter Soldier), who use the prison’s walls as their terrifying playground, threatening to unleash destruction from any angle.

Requiring over 60 cameras to track each competitor as they fight to survive the game, each participant was also clad with their own GoPro cameras so that the viewers may get even closer to all the explosive action.