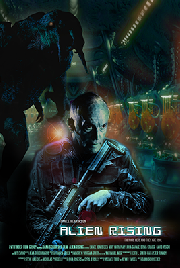 The cast for Alien Rising is impressive in its own right. Lance Henriksen (Alien 3, Millennium) has top billing and award winning actor John Savage (Deer Hunter, The Godfather III) while having limited screen time tries to make it work. The female lead is Amy Hathaway who has had guest shots in several popular television shows including “Castle,” “CSI: Crime Scene Investigation,” “Buffy the Vampire Slayer” and “The Closer.” Her movie resume is less impressive with small roles in Bradgelina’s “Mr. and Mrs. Smith” and “Courage Under Fire.” Ms. Hathaway is well suited for these smaller film and guest roles but carrying an entire movie proved a bit tasking for her in Alien Rising.

The film centers around Hathaway’s character, an ex-DEA/Homeland Security agent forced into early retirement after the tragic death of her partner and mentor (Savage). She blends into normal society as a ballet instructor but is eventually pulled back, against her will, into undercover work to find the secrets behind some E.T. technology on a remote military island outpost.

Schroeder spared no expense in bringing top grade special effects and graphics to the movie but he should have paid a tad more attention to the script dialogue and film editing. That is where, along with Hathaway’s acting, he should have concentrated his efforts. Oh…and he also needed to remove the constant and grating narration from Hathaway that permeates throughout the film

Because of that failure from the film’s director Alien Rising never quite rises to the level of a halfway decent scifi production. I’m sorry to say that despite the stellar acting abilities of a veteran like Henriksen and the cool opening sequence SFX Alien Rising doesn’t rise to the level of a “must see” film, not even for die-hard science fiction aficionados.

This trailer for Alien Rising is far more attractive than the actual film: