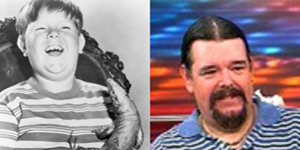 Ken Weatherwax came from showbiz royalty. His aunt was the famed Ruby Keeler and his brother Joey starred in the first three seasons of the classic 1950’s Lassie series. Ken got his acting break while doing a one-off scene on the western TV show Wagon Train in 1964. As a result of that performance he won the part of Pugsley Addams for the original 1960’s TV sitcom The Addams Family starring John Astin, Carolyn Jones and silent movie star Jackie Coogan.

Weatherwax was a part of all 64 episodes of the cult classic television show until its cancellation in 1966.

Typecast as that “weird ‘stout’ kid” from a goofy TV series Ken found getting other work in front of the camera difficult and decided to join the U.S. Army. After his hitch in military service was completed he found working behind the camera to be more successful and made his living as a set designer and lighting engineer.

Weatherwax died in his home on Sunday, December 7 of a heart attack.