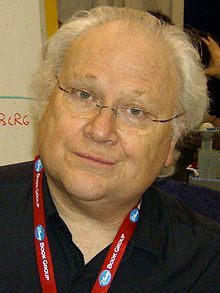 Star Trek Continues announced Colin Baker from Doctor Who will be the next special guest star for episode 4 of the online Star Trek series. Colin will bridge the gap between the two most iconic series of all time.

Colin Baker made his bones in British television acting in series and special presentations such as “The Roads To Freedom,” the BBC production of “War and Peace,” “Blake’s 7,” “The Citadel,” and many more.

However, in 1984 he shot to stardom and became a household name when he took on the role of one of the most iconic characters in television history, Doctor Who. He starred in the series as a guest actor during the Peter Davison era and then moved into the TARDIS one year later as the newly regenerated Time Lord. From 1984 to 1986 he was The Doctor. After his stint he continued portraying the sixth Doctor on stage, audio productions and in special Doctor Who anniversary editions and documentaries.

After Doctor Who Baker has continued his career as a fine actor in television appearances and films like “D’Artagnan et les trois mousquetaires,” “The Harpist,” “Shadows of a Stranger,” and others. He is also a writer and journalist.

Now Baker will lend his extensive acting skills on the set of Star Trek Continues. Actress Nakia Burrise (Hart of Dixie, Power Rangers Zeo) has also signed on to star opposite Baker for the upcoming fourth episode of the series.