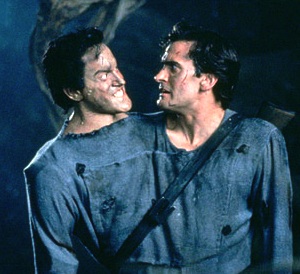 Starz TV is bringing back one of the most favorite fan franchises in sci-fi/horror history. The premium network has signed on Sam Raimi (Spider-Man) to bring his popular Evil Dead to Starz as an original series according to The Hollywood Reporter.

And, in even better news, Bruce Campbell (Bubba Ho-Tep, Burn Notice) will reprise his career changing role of Ash.

The Evil Dead television show will consist of 10-half hour episodes in much the same way that Robert Rodriquez brought his vampire series From Dusk to Dawn to the same network.

For those familiar with Raimi’s work he has also been tapped to bring a new film, Last of Us, based on the PlayStation game to the big screen. Bruce Campbell currently has three films in various stages of production — The Escort, Welcome to Purgatory and Neutron Zombies.

Look for Starz’ Evil Dead to debut sometime in 2015.