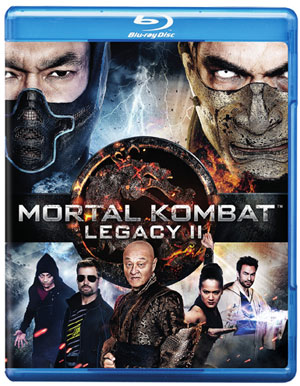 Season 2 of “Mortal Kombat Legacy” was a much-anticipated release, and the stories took the foundation that had been built in Season 1 and created far better character development and story lines for a much more satisfying overall result.

Being able to watch the entire season in one go is a satisfying way to take in the story, and also makes it more apparent how much more time was spent on character and story — something that I am anticipating they’ll be able to continue and expand on when we begin to hear about a Season 3.

The shifts in the back story and story lines for Liu Kang and Johnny Cage make for the most intriguing aspects of the season, and I know I’m not alone in wishing there had been more to the Scorpion-SubZero conflict. But as a major improvement over Season 1, this leaves me looking forward to seeing what comes next (oh yes, cliffhanger alert).

The one thing I wish they’d included for the disc are extras… behind-the-scenes or making of featurettes, gag reels or outtakes, cast interviews, producer interviews or commentaries, anything would have been gleefully welcomed. Maybe they didn’t have time or budget to film anything extra, or maybe they hadn’t planned on making a disc collection of them so they didn’t bother planning to film anything like that, I don’t know… but that is one thing I do hope they include when they get Season 3 into production, and plan ahead to include goodies like those for the next Blu-ray release.

Did I mention that I’m really anticipating a Season 3?