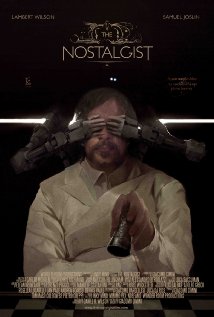 THE NOSTALGIST is a new award-winning short film, based on the story by best-selling author Daniel H. Wilson, starring Lambert Wilson (Of Gods and Men, The Matrix franchise) and Samuel Joslin (The Impossible).

The Nostalgist is set in a futuristic world where reality is not quite what it seems … In the city of Vanille, with ‘ImmerSyst Eyes & Ears’, the world can look and sound like a paradise. But the life of a father and his son threatens to disintegrate when the father’s device begins to fail. Desperate to avoid facing his own traumatic reality, the man must venture outside to find a replacement, into a city where violence and danger lurk beneath a skin of beautiful illusion.

The film received its worldwide festival premiere over the summer and will have its full theatrical debut in the UK at the BFI London Film Festival this month (October 2014).

Online distribution will be handled by We Are Colony, a new worldwide VOD platform . We Are Colony founder Sarah Tierney stated, “‘The Nostalgist’ is a short film of enormous ambition and skill, and is another step towards a very bright future for Giacomo Cimini (co-producer & VFX supervisor) and his team. We are incredibly proud to be releasing the film, and the wealth of behind-the-scenes content the filmmakers have put together. We Are Colony is a platform built by filmmakers for filmmakers and passionate fans. The film is so often only half the story. By releasing additional and making-of content alongside the film, audiences can get a much deeper, much more involved appreciation of the story, its cast and its production. For fans of the sci-fi genre, VFX, ‘The Nostalgist’ story, or the cast, they can get the inside track with documentaries, interviews, early cuts, concept art, storyboards, stills and much more.”

The Nostalgist will be released exclusively beginning Wednesday 15 October 2014 on www.wearecolony.com.