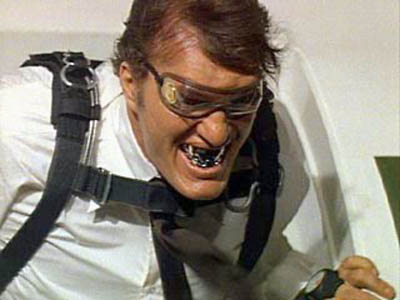 There have been two towering figures in film and television over the last five decades. One was the lovable Andre the Giant, most noted for his role in the cult classic film The Princess Bride. The other was not only known for his size but for the dental work he displayed in his James Bond films for his bad guy character Jaws. That actor was the great Richard Kiel. Richard died today from complications due to a broken leg. He was 74.

While most remembered by fans as Jaws, one of Bond’s most formidable foes who later was redeemed by the love of a woman, Kiel was already a fixture in Hollywood production by the time 007 came his way. He broke into show business in the late 1950’s with less than stellar roles. His large 7′ 2” physique and foreboding face landed him less than admirable roles until Rod Serling cast him in the 1959 episode of The Twilight Zone titled “To Serve Man.” From then on his place in film and television was set. More roles would follow many lending themselves to his near perfect comedic timing. He starred opposite some of the biggest names in Hollywood in vehicles like the original Jerry Lewis film The Nutty Professor, with Barbra Streisand in On A Clear Day I Can See Forever, Burt Reynolds in The Longest Yard and Cannonball Run II, with Robert Shaw and Harrison Ford in Force 10 from Navarone and Clint Eastwood in The Pale Rider. He was the voice of Vlad in Tangled.

Richard’s television credits runs like a list of who’s who in small screen history. He has starred in every TV genre including the aforementioned The Twilight Zone, early westerns such as The Rifleman, Klondike, Laramie and The Wild, Wild West. His sci-fi TV shows include Kolchak: The Night Stalker, The Incredible Hulk and Superboy.

Fans of Richard will be able to see him in one more new film The Engagement Ring still in production.