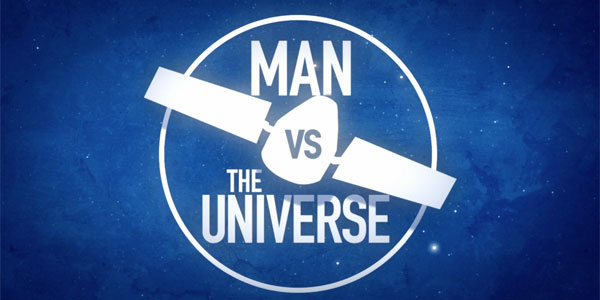 Man Vs. The Universe is an epic three-part miniseries from Science Channel and Revelations Entertainment, the producers of the critically acclaimed, Emmy-Award nominated series Through the Wormhole with Morgan Freeman that unveils an unprecedented era of space exploration happening right now.

In Man Vs. The Universe viewers go inside the race to the Moon where the grand prize offers a total of $30 million in winnings to the first privately funded teams to land a robot on the Moon that successfully travels more than 500 meters (1,640 ft) and transmits back high-definition images and video. Deeper in our galaxy lies Mars, with an atmosphere 100 times thinner than Earth’s, air that is almost pure carbon dioxide and an average temperature of minus 80 degrees, colonizing this planet will be no picnic. Man Vs. The Universe explores how high tech spacesuits are being created so humans can live comfortably in this environment 24/7, while we experiment turning Martian soil into water.

Man Vs. The Universe is also keeping an eye on our home planet as engineers and scientists prepare for the next mega asteroid attack, similar to what killed off the dinosaurs. They are pushing the limits trying to create an enormous capture bag – a robotic vehicle that will go out and snag an asteroid partway between Earth and Mars, and drag it back to orbit the moon. If that doesn’t work, Plan B is DE-STAR, a massive solar-powered array of laser beams that vaporize asteroids ten times larger than a football field.

The Three-Part Special of Man Vs. The Universe World Premieres Wednesday, August 13 at 10 PM ET/PT on Science Channel.

Man Vs. The Universe Episode Descriptions

For the first time since the Cold War the Moon is inspiring a race. But this time around winning is not about proving military might -– it’s about cold hard cash! The Moon’s enormous mineral wealth could create the world’s first trillionaires. Viewers will meet engineers trying to fashion moon bases out of underground lava tubes, or 3D-print a lunar colony using moon dust. Competing against all these Moon 2.0 startups is the world’s new superpower, China. Who will be the first to stake claim to the riches of the Moon?

“How to Kill an Asteroid”
World Premiere Wednesday, August 20 at 10 PM ET/PT

Asteroids have decimated life on Earth before and they will again. Across the globe, scientists, engineers and astronauts are gearing up for a cosmic battle to hunt asteroids and prevent them from hitting us. In this episode viewers will meet the experts building new telescopes and space probes to detect the estimated one million asteroids out there that could wipe out an entire city. We’ll explore plans to knock an incoming asteroid off course with a kamikaze spacecraft, or to shoot asteroids down with giant space lasers. And we go inside the craziest NASA mission ever proposed – to capture an asteroid in deep space with a giant bag and move it to the Moon.

“Mars Is Ours”
World Premiere Wednesday, August 27 at 10 PM ET/PT

For decades humans have dreamed of going to Mars, and now we’re finally on the brink of blasting off for the red planet. SpaceX founder Elon Musk believes Mars is our insurance policy in case Earth becomes uninhabitable. With unprecedented access into SpaceX, viewers will see the engineers making our mission to occupy Mars a reality. Future “Marsonauts” are already learning how to survive on a frozen desert by practicing in the wilds of Utah. An aerospace engineer is designing the spacesuit that will shield us from the harsh Martian environment and give us superhuman strength. SpaceX hopes to get to Mars in about two decades, but another space startup, Mars One, thinks it can get humans there in just ten years. The only catch: it’s a one-way trip, with no chance of ever coming home.