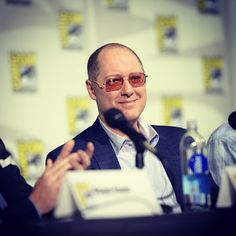 James Spader knows sci-fi. He is the original Dr. Daniel Jackson in the big screen version of Stargate. The first real Alien Hunter. He has experienced a Supernova first-hand. And, was one mean, conniving bastard of a werewolf giving the great Jack Nicholson a run for his money in Wolf.

Yep. Spader knows sci-fi, so it came as no surprise to his fans to learn that the man who daily hung out on a Boston office building balcony smoking big stogies and dressed in pink flamingo garb with none other than Captain James T. Kirk for five years would be the next villain for the new Avengers: Age of Ultron film.

In an interview with io9 at this year’s San Diego Comic Con Spader said of his entrance to the Marvel universe, “I met with Kevin [Feige] several years ago about the idea of doing some Marvel movie. Every so often there were some conversations over the years, ‘maybe this, maybe that.’ We both agreed to really try and wait and find just the right thing.”

I think with Ultron, they have found the perfect vehicle for Spader to stretch his bad-guy muscles.

Whose idea was it to cast James as the Avenger villain? I’ll let Spader tell the story. “Then Joss [Whedon] came in to do Avengers 2, and ironically enough even though we had already [been] talking about trying to find something, Joss came in and said, ‘I want James to play Ultron’…………So, that’s what we did.”

James Spader can be seen every week on NBC’s big hit show Blacklist.

You can watch the full SDCC Ultron video interview with Spader at io9.