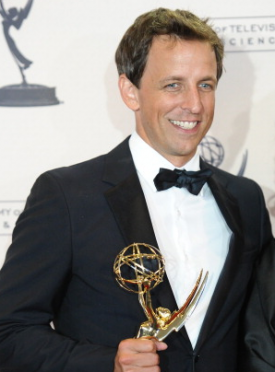 Science fiction and related SF genre programming has made quite a dent in this year’s Primetime Emmy Nominations garnering a total of fourteen nominations in the twenty-two major categories.

Others in the running for statues are The Big Bang Theory, Best Comedy Series, including Jim Parsons up for Actor, Comedy Series and Mayim Bialik for Supporting Actress, Comedy Series. Benedict Cumberbatch made the list for Actor in a Miniseries or Movie for his portrayal of Sherlock Holmes in BBC’s Sherlock series.

Finally, veteran actor Bob Newhart is nominated for Guest Actor in a Comedy Series for his stellar work on The Big Bang Theory.

Each year the presence of traditional network entries gets overshadowed and this year the online markets such as Netflix, the cable (AMC, BBC, FX, IFC, Lifetime, Comedy Central, Nick, A&E and Bravo) and premium pay channel (HBO, Showtime, Starz) shows far exceed the number of programming from fading stalwarts like ABC, CBS, NBC, Fox, PBS and even The CW (which received no major nominations).

In the non sci-fi or related genre field of shows the Netflix sensation Orange Is the New Black is the big nominations winner this year with five Emmys up for grabs including Taylor Schilling for Best Actress, Comedy Series and Kate Mulgrew as Best Supporting Actress, Comedy Series. In Kate’s long and active career on TV, stage and screen, which has spanned nearly four decades; this is her first Emmy nomination.

The Primetime Emmy Awards ceremony will be telecast by NBC on August 25, 2014 LIVE from the Nokia Theater in Los Angeles. Former Emmy winner Seth Meyers (SNL, Late Night) will host.