If you were disappointed with the cancellation of CW Network’s The Tomorrow People because you wouldn’t be able to see Robbie Amell on TV…..think again. 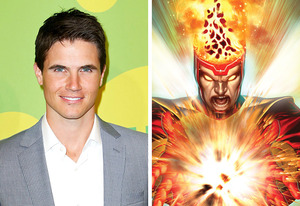 TV Guide has announced that Robbie has just signed on to be a regular for the highly anticipated The Flash series. He will play maintenance worker Ronnie Raymond, aka Firestorm.

In the Flash comics Firestorm was created after a nuclear explosion fused Raymond with physicist Martin Stein.

“I’m so excited to join forces with Greg Berlanti and The CW again on ‘The Flash’,” added Amell. “Being brought into the DC Universe is a dream, I can’t wait to get started!”

Berlanti, who serves as the show’s executive producer stated that he and the entire cast and crew of The Flash are very thrilled to “have someone with Robbie’s talent playing the role….”

Amell joining The Flash will be sort of a family reunion for him and Arrow star Stephen Amell. Stephen his Robbie’s older cousin.