For twenty years Omni Magazine printed great articles and some of the most exquisite and beautifully mesmerizing pictures in science fiction so when the publishers of “The Mind’s Eye – The Art of Omni” asked me to do a review for their new coffee table book release I didn’t hesitate to say “Yes!”

Edited by Jeremy Frommer and Rick Schwartz with an introduction from famed sci-fi author Ben Bova “The Mind’s Eye – The Art of Omni” is a feast for the eye and imagination of every science fiction and fantasy lover.

Omni was created by Bob Guccione the founder of centerfold magazine Penthouse. I can remember back in 1977 when it was first announced that the famed, or some were calling him infamous, publisher would be putting out a new science magazine that would speak to the everyman and not just the scientific community; even I had my doubts as to its worth. The equivalent today would be the same kind of head shaking that took place when it was learned that Seth McFarlane, the comedic creative genius behind Family Guy and Ted, would be the main producer behind the new 2014 Cosmos series hosted by astrophysicists Neil deGrasse Tyson. Many wondered how someone like McFarlane could ever fill the shoes of the highly respected scientist Carl Sagan, the creator, producer and host of the original Cosmos series from 25 years ago. However, after the series was released this year all those doubts about McFarlane’s ability to take a serious and respectful view of the universe was abated.

All those fears about Guccione were also soon alleviated when the first edition of Omni hit book shelves in 1978. Those of us in both the science and sci-fi community knew almost immediately that this magazine was something uniquely different from all that came before it. We still loved our Scientific American, Science Digest, Popular Science to get our hard science fix but when it came to feeding our imaginations to the possibilities that lay before us Omni was the new go-to hideaway.

The artwork that graced the covers and within the pages of Omni was incomparable to anything that had come before it, at least for the science and science fiction loving generation of that era. It was discerning, superlative and strikingly beautiful and haunting at the same time and “The Mind’s Eye – The Art of Omni” captures the best of that two decades of imaginative, elegant and matchless art from painters and artists like Cliff McReynolds, Paul Peck, Dean Ellis, Chris Moore, the architectural artwork of Ricardo Delgaldo – the designer concept artist behind the look of Star Trek: Deep Space Nine, Tim Teebken and Marvin Mattleson’s famed “The Empty Mirror,” just to name a few.

Really good tabletop/coffee-table books are few and far between for the science fiction/fantasy collector and aficionado so I highly recommend “The Mind’s Eye – The Art of Omni” for anyone with that special palette of appreciation for the ethereal and refined taste in superior work. 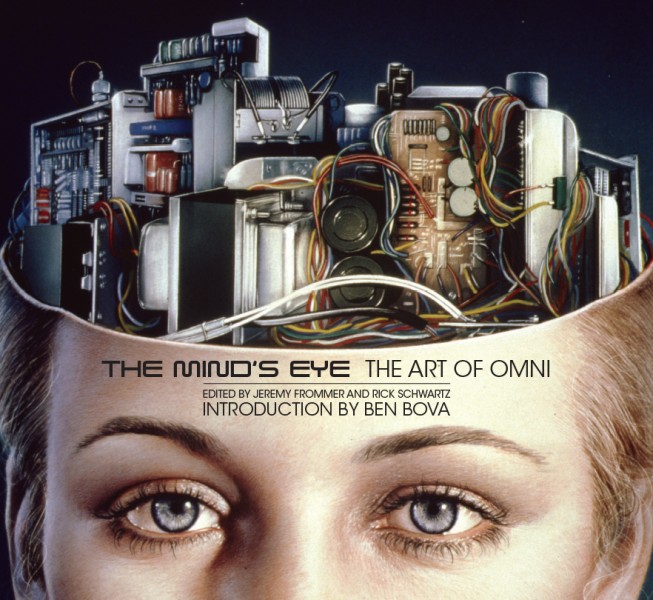