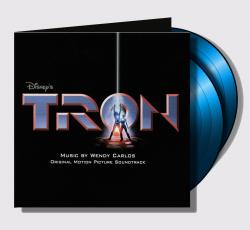 Disney’s 1982 video game crossover movie TRON was a notable landmark in the synthesis of electronic and traditional orchestral music. Carlos created a brilliant orchestral recording with symphonic backgrounds by the London Philharmonic Orchestra and the UCLA Chorus which was later enhanced and upgraded with an electronic score. The result is an impressive soundscape that successfully and seamlessly fuses organic and electronic music.

The multi-Grammy award winning Wendy Carlos best-known for her popular “Switched on Bach,” series of albums also composed and performed on the soundtracks of two Stanley Kubrick cinema masterpieces, A Clockwork Orange and The Shining.

The TRON album includes two additional tracks (“Only Solutions” and the rock guitar-driven instrumental, “1990’s Theme”) provided by Journey, one of America’s best selling rock bands. Look for it this summer.

TRACKS:
SIDE 1
1-Creation Of TRON
2-Only Solutions – Journey
3-We’ve Got Company
4-Wormhole
5-Ring Game And Escape
6-Water, Music, And Tronaction