SOS: Save Our Skins is a micro-budgeted fan film by British comedians Chris Haywood and Nate Saunders. It tells the story of Stephen (played by Haywood) and Ben (played by Saunders), two friends visiting New York from England to attend a science fiction convention. On the day that the convention is set to begin, they awake to find that the city is deserted. There is nothing on the television, nobody is answering their phone calls, and wherever they walk it seems that everyone has mysteriously disappeared. The only sign of life is a blue alien creature that chases them down the hallway in their hotel. As the tale progresses, the two find themselves on a quest to locate any life remaining on the planet. In the process they encounter a cannibal serial killer, a beautiful deranged psychopath, Canadian video game addicts, and an alien life form holding the secret to humanity’s disappearance.

SOS is similar in style and tone to something like Kevin Smith’s debut feature Clerks. It’s a couple guys with a video camera, seemingly having fun with their friends and coming up with skits to make themselves laugh. Since there is not much of a budget, most of the running time is spent on character interaction and jokes that pay homage to things the writers are obviously fans of. The film is light and playful and clearly reflects the influence of British comedy pieces such as Douglas Adams’ Hitchhiker’s Guide to the Galaxy and Grant Naylor’s Red Dwarf. 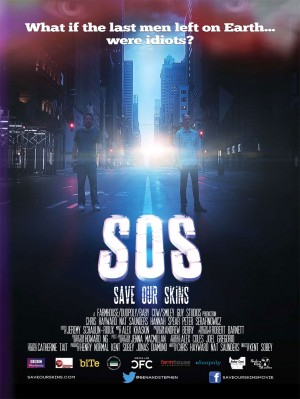 SOS is a fun movie that seems to have been made by a couple of “average Joes” looking to have a good time celebrating their sci-fi “geekdom.” I like the style and lighthearted nature of its presentation, and on the whole found it to be a more enjoyable film than I had feared from its description as yet another low budget “horror comedy.” I did have some fun with it, and wish I could give this movie a wholehearted recommendation. Unfortunately, for all the things this film does right, there is one key and completely necessary element that it gets wrong… it just isn’t funny. I watched the movie with my wife, who is normally a big fan of this style of humor. I think I mildly chuckled about three times through the course of the whole movie. My wife half laughed one time, and that may have been more at me chuckling than at the film itself.

For something like this really to work, it’s imperative that it be a laugh riot. It’s got to have lines and moments that crack its audience up, and that people will go around repeating and joking with their friends about for weeks afterward. This film gets the lighthearted, playful part right, but completely falls on its face when it comes to actually making you laugh. It’s a shame because you can tell it’s a sincere effort by a couple of guys looking to have a good time paying homage to the things that they love.

In the end it’s a reasonably enjoyable, but ultimately forgettable, foray into a style of video making that’s already been done better and more successfully by other productions.