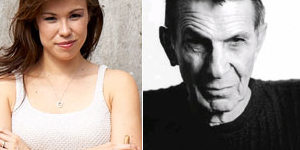 The one and original Mr. Spock – Leonard Nimoy – announced he will make a live appearance this week at the Boston Symphony Hall with the POPS Orchestra that will be performing the “Out of This World with Leonard Nimoy” concert series.

The special Boston POPS event will take place on May 23 and 24 beginning at 8PM EDT.

Music will including Holst’s The Planets (performed alongside a film by astronomer Jose Francisco Salgado, PhD, featuring NASA visuals), the theme from Star Trek, the classical works (Also Sprach Zarathustra and Blue Danube Waltz) popularized in 2001:A Space Odyssey, and John Williams’s intergalactic music from Star Wars, E.T., and Close Encounters of the Third Kind.

To get you tickets visit the Boston Symphony Orchestra website.